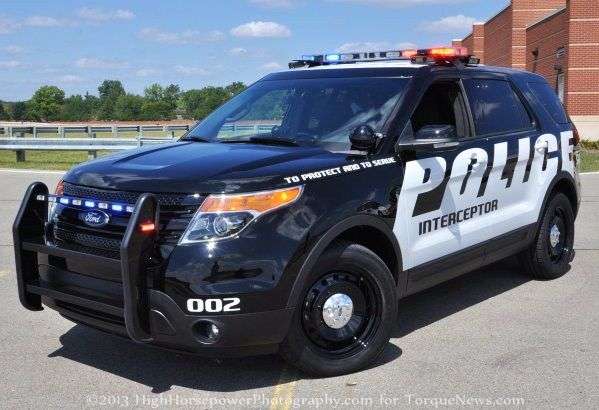 The Ford Police Interceptor Utility is proven to be very popular with the various police departments around the country but unlike the civilian issue Ford Explorer – the police version was not available with the 3.5L EcoBoost V6. This engine provides 365 horsepower and 350lb-ft of torque in the Explorer Sport and with the same horsepower and slightly more torque in the Taurus based Police Interceptor sedan, it would seem like common sense that this performance minded twin turbo V6 would have been a simple choice in the police version of the Explorer. However, until now police departments could only get the brawny SUV with the naturally aspirated 3.5L V6 with 290 horsepower and 255lb-ft of torque or the 3.7L V6 that offers 304 horsepower and 279lb-ft of torque.

"We continue to look at ways we can offer our customers additional product enhancements to further meet their unique needs," said Gerry Koss, Ford fleet marketing manager. "Our Police Advisory Board and customers across the country identified the EcoBoost engine as their No. 1 want in the Police Interceptor utility vehicle. With the Police Interceptor utility vehicle representing half of our police orders, it is evident our two-vehicle strategy was on target," said Koss. "Our engineering team designed this vehicle specifically for the police market."

The best aspect of the 3.5L twin turbocharged EcoBoost V6 is the fact that it offers all of this power while also offering excellent fuel economy. While the Police Interceptor Utility is likely a touch heavier than the Explorer Sport on which is it based due to the added features required for police duty, the EcoBoost-powered police SUV should return somewhere in the area of the 16 city, 22 highway and 18 combined offered by the Ford Explorer Sport.
All three of the engine options for the Ford Police Interceptor Utility are fitted to a 6-speed automatic transmission and while those SUVs with the naturally aspirated 3.5L V6 are offered with front wheel drive, the 3.7L V6 and the EcoBoost 3.5L V6 come with an advanced all wheel drive system.

In last year’s Los Angeles County Sherriff Department’s vehicle testing procedure, the Ford Police Interceptor Utility beat the Chevrolet Tahoe police model in every category except for acceleration, high speed and pursuit. Those categories were claimed by the Chevy SUV for no other real reason than the fact that the Tahoe was fitted with a 5.3L V8 with substantially more power than the 3.7L V6 in the police Explorer. Now that the Police Interceptor Utility will be available with the EcoBoost V6 – I would be willing to bet that the outcome of those speed tests will be very different.

This engine option in the Police Interceptor Utility will allow these Ford police vehicles to tow and haul more weight but this new EcoBoost’d police SUV will surely be a whole lot faster when they hit the streets. This is an SUV that could serve as a pursuit vehicle almost as well as the Taurus-based Interceptor sedan so speeders should soon be on the lookout for the Explorer based police SUVs – as they soon wont be so easy to outrun.

The Ford Police Interceptor Utility already accounted for roughly half of all Ford police department fleet sales and now that it will be offered with the same high performance engine as the Interceptor sedan, the Taurus SHO and the Explorer Sport – sales will only get better.