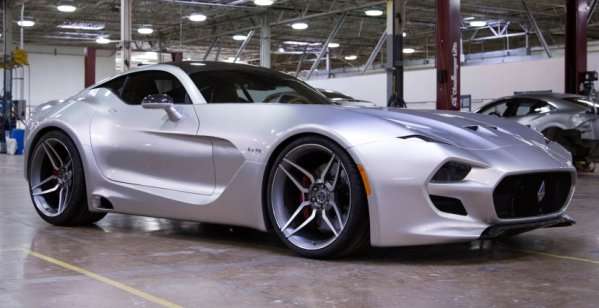 Henrik Fisker and Bob Lutz have teamed up to create a unique new American supercar with a custom carbon fiber body wrapped around a Dodge Viper chassis and drivetrain – with 745 horsepower leading to a top speed of 218 miles per hour.
Advertisement

A few weeks back, it was announced that Henrik Fisker would debut a new V10-powered supercar at the Detroit Auto Show and at that point, we speculated that it would feature Dodge Viper power. This mysterious supercar was teased as the Force 1 V10 and now that the new supercar has been introduced in Detroit, we know that it not just Viper-powered – it is heavily based on the modern Dodge Viper.

This customized Dodge Viper is the result of a project between Bob Lutz, Henrik Fisker and Ben Keating. Bob Lutz is one of the most well-known men in the American auto industry, most recently introducing his VL Automotive brand, which puts Corvette engines in the Fisker Karma bodies. Henrik Fisker is a legendary automotive designer who has penned not just the Karma, but also a variety of historic BMW and Aston Martin vehicles. Finally, Ben Keating is the owner of one of the biggest Dodge dealers in the US when it comes to Viper sales, while also being the team owner and a driver of the current Dodge Viper endurance racing programs.

Shortly before the Detroit Auto Show, it was announced the Bob Lutz’s VL Automotive was becoming VLF Automotive – with the F being added to mark the arrival of new partner, Henrik Fisker. Once the two had teamed up, they sought the help of a Viper expert to help create what they call the All American Supercar.

The VLF Force 1
If the car shown above looks like it is shaped a little like the Dodge Viper (especially around the back), it is because this kind of is a Dodge Viper – or it was. The Force 1 has a custom carbon fiber body built onto the chassis of the modern Viper and the most recognizable features of the Dodge are the roofline and the rear hatch. However, the front and rear fascia, the side sculpting, the wheels and the hood are all significantly different from the stock Viper.

On the inside, the Force 1 is nearly identical to the Viper, except the interior cockpit has been lined in even higher end materials than what we find in the Dodge. I say “nearly”, because there a couple key differences, with a wine bottle holder between the seats and an automatic shifter paired with steering-wheel mounted shift paddles rather than the Viper’s manual transmission shifter. A manual transmission is standard, but a new 6-speed automatic developed specifically for this car is shown in all of the images – likely because the company would want to showcase the more user friendly option.

Next up, we have the drivetrain – which is the same 8.4L V10 from the modern Dodge Viper, but with the help of Viper Exchange owner Ben Keating, the output has been lifted from 645 to 745 horsepower while torque has jumped from 600 to 638lb-ft. The Force 1 also has a specially tuned version of the Viper’s active suspension system and the massive Brembo brakes of the Viper, so this car builds on what is already an incredible performance car.

The result is a custom supercar that will dash form 0-60 in just 3 seconds while also hitting a top speed of 218 miles per hour. This means that with the extra power and the unique aerodynamics, Fisker’s Force 1 will outrun the Dodge Viper in most races.

Limited and Expensive
The VLF Force 1 will be limited to just 50 units and when you add that exclusivity to the high end interior, the custom carbon fiber body and the beefed up Dodge Viper chassis/drivetrain, it should come as no surprise that the Force 1 costs more than the Viper. In fact, it costs quite a bit more, with an MSRP of $268,500 compared to the Viper GTS starting price of $110k making this unique supercar around $150k more. That is a big chunk of change, but for the prospective supercar buyer who has a quarter mil to spend on a car that will stand out in a crowd of Ferraris and Lamborghinis, this new VLF supercar could be an enticing option – especially for someone looking to crush European cars with American power.