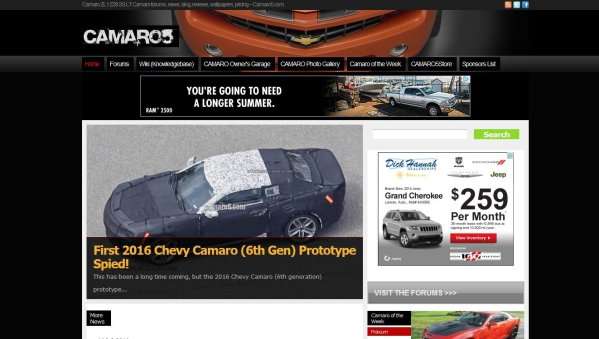 The First Images of the 2016 Chevrolet Camaro Look Strangely Familiar

General Motors has done a very good job of keeping the 2016 Chevrolet Camaro completely hidden from the prying eye of spy photographers over the past few months, but the first batch of spyshots have surfaced online – showing a heavily camouflaged car that looks far more like a refreshed current Camaro than a radical redesign.
Advertisement

When the first discussions about the 2016 Chevrolet Camaro hit the web, many expected that the 6th generation Camaro would have a drastically new look. However, insider information over the past few months reversed that initial thinking, insisting that the 2016 Camaro would look more like a refreshed 5th gen Camaro than a drastically new look. That report was refuted by an unsubstantiated rumor more recently that suggested that the 2016 Camaro would take on an exterior appearance that is more like the second generation Camaro – with a longer, narrower overall shape than the 5th gen Camaro.

Well, with the first spyshots of what is very likely the 2016 Chevrolet Camaro hitting the web, it looks as though the rumors were wrong and those early reports were right – as the heavily masked Camaro seen driving around appears to be shaped very similarly to the current 2014 Camaro.

What the 2016 Camaro Mule Reveals
The images captured of the 2016 Chevrolet Camaro (which are showing up more and more around my local area while eluding my camera) show a car that is very heavily camouflaged so we really can’t see much – but it sure looks like this car is shaped very much like the current 2015/5th gen Camaro. The body may be a little narrower than the 5th gen, but it nowhere near as big of a change as we saw in the change between the 1st and 2nd gen Camaro. The dimensions might be different, but the overall shape of the car doesn’t appear to have changed much. Also, the area under the front end camo appears very much to be shaped like the face of the current generation Camaro…which supports the insider information that stated that the 2016 model would be similar in its design to the 2010-2015 models.

In addition to the shape of the greenhouse of the 2016 Chevrolet Camaro – which is very similar to the 2015 Camaro – we can clearly see that this first spied 6th gen Camaro has some aggressive split spoke wheels and a pretty substantial set of quad exhaust tips out back. That has led some to believe that this is something like a future ZL1 or Z/28, but it very well could just be a Camaro SS with a more impressive exhaust setup. Supporting the suggestion that this is a higher level model is what looks to be a pair of slotted vents on both sides of the hood. Those seem like a feature that would be fitting of the 6th gen Camaro ZL1 or Z/28, but with the Camaro SS coming with a single standard hood vent now – I wouldn’t be terribly surprised to see dual vents on the 6g Camaro SS.

Regardless of what trimline this 2016 Chevrolet Camaro test mule might be, it seems to predict a future for the 6th gen Camaro that will have it looking more like the 2015 models rather than a whole new design similar to the 2ng gen Camaro in 1970.
Of course, GM could have just slapped some camo, wheels and exhaust tips on a 5th gen Camaro to throw us all off…but would they really bother to do that? Probably not.

You can click here to head over the Camaro5.com for a look at all of the spyshots.

bill wrote on August 1, 2014 - 4:11pm Permalink
looks like the GM designers are getting lazy.
Robert Spinello wrote on October 8, 2014 - 8:25am Permalink
This is not the new Camaro. It is a test mule nothing more. The new car will be completely redesigned in and out. Do you honestly think Chevy would use a 10-year old design (concept car notwithstanding) on the all-new car? I think not. For one the highly criticized low roof is history. Every Chevy that has been downsized since 1977 might have had some styling elements of a previous generation, but was still, always, all new, not a shortened copy. How could you believe this the the all-new Camaro? You have been fooled. If anything, this mule could stimulate sales of the 2015 model.
gbcamaro wrote on December 12, 2014 - 8:37am Permalink
It's hard to tell what he'll is going on at this point but I am getting tired of f##ck waiting