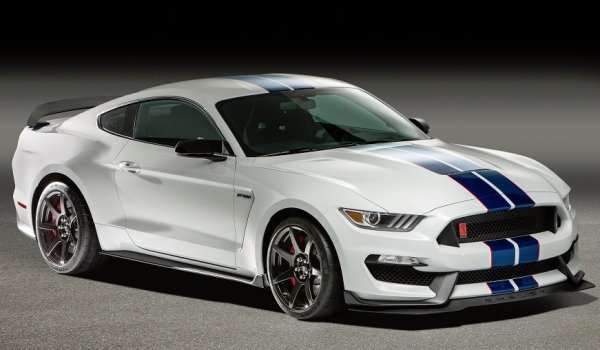 The first new Ford Shelby GT350R Mustang rolled across the Barrett Jackson auction block this past weekend and when the final gavel came down – GT350R #1 raised an awesome $1,000,000 for the Juvenile Diabetes Research Foundation (JDRF).
Advertisement

Prior to this past weekend’s Barrett Jackson auction in Scottsdale, Arizona, it was expected that the new Ford Mustang Shelby GT350 that debuted late last year in LA would roll across the auction block to raise money for charity. However, as the auction fired up and the bidding wars began, the auction bidders got a big surprise when Ford Motor Company CEO Mark Fields pulled onto the main stage in the more track capable Shelby GT350R Mustang. This model will not only be more expensive than the GT350 Mustang, but the “R” models will likely be more limited in numbers so in the long run, having the very first GT350R will carry more collector’s value than the first GT350.

“The Shelby GT350R is a world-class car, the best performing Mustang that we have ever built,” said Raj Nair, Ford Group Vice President, Global Product Development. “We are thrilled to donate the first retail production Shelby GT350R to JDRF for auction. When this car crosses the auction block it should raise a tremendous amount of money for a great charity.”

The Auction for the First GT350R
The Ford Shelby GT350R Mustang that debuted last week at the 2015 North American International Auto Show in Detroit was finished in a stunning deep metallic blue with white-trimmed black stripes. Unfortunately, it seems that this unique blue hue was reserved for the launch festivities only and it is not expected to be offered on the GT350R Mustang production models.

Not surprisingly, the bidding was hot and heavy at first, with prospective buyers digging deep into their pockets for the right to own the first production unit of the new Mustang track monster. Bidding quickly climbed past the half million dollar plateau, but when it hit $800,000, the auction stalled. That is when Mark Fields stepped in and announced that the highest bidder would also get tour of the Ford headquarters and Fields himself would hand over the keys to GT350R #1 once it is built. That sparked more bidding and after the price jumped another $200k, the auctioneer dropped the hammer at a cool $1,000,000.

Update: The reports that Mark Fields contributed an additional $150,000 to the final selling price were untrue according to a company representative.

Proceeds Going to a Great Cause
Like so many other high profile vehicles the hit the Barratt Jackson auction block, the proceeds of the sale of the first Ford Shelby GT350R Mustang are going to a very good cause. The $1 million from the GT350R auction will go entirely to the Juvenile Diabetes Research Foundation (JDRF), a group which makes strides to help support children who suffer from Type 1 diabetes.

“JDRF is privileged to work with Ford, and we are extremely grateful for the generous support from Ford and its employees through the years,” said John Brady, JDRF chairman, international board of directors. “We are honored to be part of the company’s 50-year celebration of the Shelby GT350 at Barrett-Jackson Scottsdale. This very exciting and worthwhile event means a great deal to not only JDRF and the type 1 community, but to me personally as well. We are dedicated to continue our work and to share our vision of creating a world without type 1 diabetes.”

Production of the Shelby GT350R Mustang is slated to begin later this year and when it does, the winning bidder (who surprisingly preferred to remain anonymous) will fly to Detroit to meet up with Mark Fields, tour the Ford World HQ and pick up his or her new super muscle car.