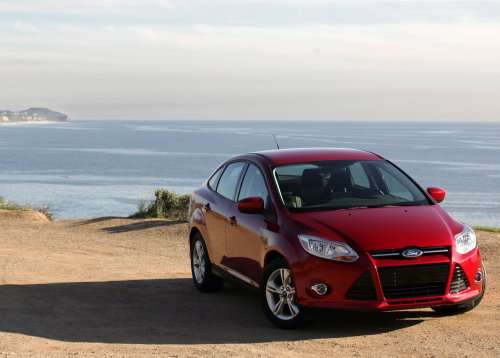 The 2012 Ford Focus is part of the Motor Company’s “One Ford” plan to offer the same vehicles around the world and recently TorqueNews had a chance to drive the newest C-segment sedan and hatchback before they hit showrooms later this year.
Advertisement

The new Ford Focus will eventually come in a variety of forms, from the Focus Electric to the high performance/long-awaited Focus ST (both coming in 2012) but when the 2012 models hit dealerships in the next few months it will be available as a 4-door sedan or 5-door hatchback - both of which I had a chance to drive around the scenic roads of the LA area. The area is full of twisty canyon roads that rival the world’s most intricate road courses with turns that will challenge even the highest performing sports cars available in the US market. The 2012 Focus is no sports car, but this technical setting really made for a great testing ground for the drivetrain and suspension improvements made from the previous generation of the Focus.

Ford is quick to point out the features of the 2012 Focus like the sharpened styling, improved interior sound control and electronic gadgets but ultimately, nothing is more important than how a car rides and drives. I had a chance to drive two versions of the 2012 Focus, first the Focus SE and then the high-end Focus Platinum. To my delight, the Focus SE was equipped with the SE sport package that tacks on some great-looking black and silver 17” aluminum wheels and rear disc brakes but most importantly, the SE comes with a manual transmission. On the other hand, the 2012 Focus Platinum was fitted with every interior gadget and exterior dress-up item that you could ask for but unfortunately, one item that you cannot ask for is a manual transmission. Although the automatic transmission does feature Ford’s SelectShift which gives the driver some control but if I had my druthers, the stick shift would at least be offered across the entire 2012 Focus lineup.

First off, while many of today’s drivers are too uncoordinated (or lazy) to drive a manual transmission, Ford has done a fine job of putting together a clutch setup that is very forgiving so it won’t take years of experience to get a feel for the shifting the new Focus. The clutch pedal is firm but it engages gently so for someone who is a little slow with the accelerator, the 2012 Focus has your back. Also, when you shift from gear to gear, the RPM drop is slight enough that there is less need to hit that “sweet spot” to prevent the annoying clutch-shudder associated with some poorly driven stick shifts. When cruising at speed, you can pretty much shift without touching the throttle and in the driver information center in the middle of the gauge cluster Ford offers a shift assistance program that lets you know when to shift and to what gear.

The Ford Focus ST will feature an EcoBoosted 2.0L mill churning out 250hp but as the 2012 Focus hit’s the market it is just available with a 160hp 4-cylinder that offers 40mpg when mated to an automatic transmission. When driving a manually shifted 2012 Focus, you’ll find that when you are cruising at 35-40mph and you hit a large hill you will have to downshift as the engine doesn’t pull well when the RPMs get too low but this was only a problem with the manual model I drove when I was intentionally leaving the car in a higher gear to see how it pulled. While more power is always nice, this standard 4-cylinder engine provides enough power to make the 2012 Focus fun to drive - something that you cannot say about all of the cars in the c-segment. You probably aren’t going to win many drag races but the 160hp is plenty to keep up with traffic and on the twisty roads of southern California the combination of this new engine and the manual transmission provided for some surprising high speed driving excitement.

Needless to say, these highly technical roads are more demanding to the suspension system than any other part of the drive train and the 2012 Ford Focus handled the roads wonderfully. Under normal driving conditions, the suspension system in the new Focus provides a smooth, quiet ride but on the hard curves of Mulholland my Focus SE sedan held the road well. The steering is very responsive, allowing me to cut through the hard s-turns and switchbacks with little effort and in most of the lower-speed areas the gearing allows you to leave the car in 2nd gear and concentrate on the corners. I don’t know how many people will be buying a base model 2012 Focus to do any road racing but for those who do want to push their new Focus to the limit this felt like a car that could do some double duty in the ranks of SCCA Solo competitions.

If you are less interested in gear-banging fun than you are luxury amenities, the 2012 Ford Focus Platinum is the model for you. The Focus Platinum only comes with a manual transmission but with the SelectShift feature, the driver can play around with the gears a bit for more control. While the high-end Platinum doesn’t come with a stickshift, it comes with pretty much everything else – from the high tech MyFord Touch system with a high quality sound system to leather, heated, power seats and everything in-between. In short, the Platinum trimline from Ford is all about putting surprising quantities of items traditionally associated with much more expensive vehicles into something that everyone can afford and enjoy.

The current slogan from Ford is “Drive One” and without driving the 2012 Ford Focus, the average consumer will not appreciate how much the automaker has improved their popular c-segment sedan and hatchback but even a short test drive shows the most novice driver that Ford’s Focus is no longer just about cheap, fuel efficient transportation. I have spent quite a bit of time in the previous Ford Focus was very impressed by my time spent ripping through the LA area in the 2012 Focus. The interior has been improved both by the new materials and the alterations made to the suspension system, adding comfort and functionality for the driver and passengers and the new drivetrain offerings make for a fun, efficient drive.

Check out the gallery below for a closer look at the 2012 Ford Focus and stay tuned to TorqueNews.com for more reviews of the hottest new vehicles from around the industry!