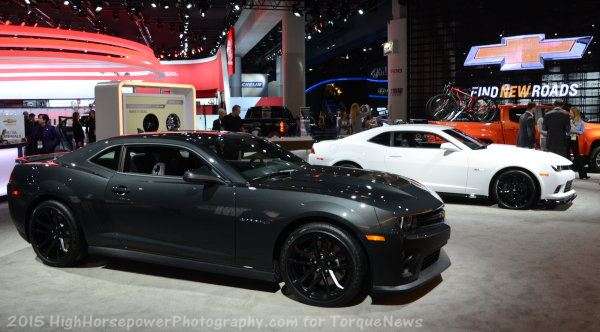 Final 5th Gen Camaro to Be Built on November 20th

The automotive world is still abuzz from the debut of the 2016 Chevrolet Camaro this past weekend in Detroit, but the news has surfaced that production of the 5th generation Camaro in Canada will come to an end on November 20th, 2015 – marking the end of an era that has spanned the last two generations of the GM muscle car.
Advertisement

The 2016 Chevrolet Camaro that debuted on Saturday is all-new - with a new exterior design, a new interior, a new chassis platform, a new engine lineup and even a new build location. Unlike the 4th and 5th generation Chevrolet Camaros that were all built in Canada, the 6th generation Camaro will be Made in the USA. General Motors announced last year that the 2016 Camaro would be built at the Lansing Grand River Assembly Plant in Michigan, which came as a bit of a surprise considering that the popular 5th generation Camaro had been built at the Oshawa Assembly facility in Canada.

Moving Camaro production from Canada to Michigan allows General Motors to better battle the Ford Mustang, which is and always has been built in the United States. In the fight between the Camaro and the Mustang, every little advantage can make a difference so with the push for American made products, the Mustang currently has bragging rights over the Camaro – but that will all end with the 2016 Camaro.

Of course, for the production of the Camaro to begin in the United States, it has to come to an end in Canada, and according to GM Authority, that day is November 20th.

First and foremost, the last 2015 Camaro built on November 20th will be the last of the 5th generation Camaros – a car which returned for the 2010 model year and quickly moved to the head of the American muscle car segment. The Camaro had been gone for 8 years prior to the arrival of the 5th gen and when it returned, fans were waiting with cash in hand. As a result, the Camaro outsold the Mustang in 2010, 2011, 2012, 2013 and 2014.

Next, the final 2015 Camaro marks the end of Camaro production at the Oshawa Assembly Plant. The plant will continue on with other models, but after building the bestselling sports car in America for five straight years, November 20th will mark the last Oshawa-built Camaro.

2016 Camaro Production
We know that the 2016 Chevrolet Camaro will be built at the Lansing Grand River plant and we know that the first units are expected to reach dealerships before the end of the 2015 calendar year, but we don’t know when Lansing will start building the 6th gen Camaro. With 2015 Camaro production running so late into the year, it seems that GM plans to continue providing 5th gen models until very late in the 2015 calendar year and that could be due to GM expecting to roll out the new models much later in the year. Considering how well the 2015 Camaro is still selling, it makes good sense for GM to build those models until the company is ready for a full scale rollout of the 2016 models.

Larry James Mul... wrote on May 20, 2015 - 9:42am Permalink
I am absolutely blown away, because I have the opportunity to get into a 2015 Chevrolet Camero LS from Premier Chevrolet in Buena Park, California. I have the awesome pleasure to work with the Internet Sales Manager Tom Bramble. He is a great guy and a personality of a winner! I look forward to working with him!