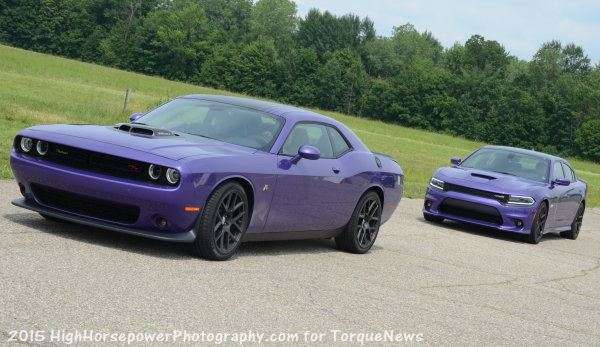 Few Changes for the 2016 Dodge Challenger and Charger

There are a great many rumors floating around the internet insisting that there are some changes coming for the 2016 Dodge Challenger and 2016 Dodge Charger, but there are actually very few changes for the new model year – shy of some new option packages, the return of Plum Crazy purple and increased production of the Hellcat Hemi-powered models.
Advertisement

Although we already have official pricing information on the 2016 Dodge Challenger and Charger in SRT form, there are some foolish rumors being spread around the internet about the 2016 model year. Some of these phony reports and erroneous internet rumors claim that the Charger will receive yet another facelift and that the Hellcat engines will receive a power increase. Having already driven the 2016 Charger, I can tell you that it most certainly did not go away from the stylish, ultra-modern face that was introduced for 2015 and if the Hellcat was going to get an official power increase for 2016 – the company most certainly would have announced that when they announced the pricing increase for the new model year.

In fact, at this point, any rumors for the 2016 Challenger or Charger are almost surely nonsense, as both cars are only a single model year old and they are both selling very well. However, to help keep the sales momentum going, there are some small changes to both the Challenger and the Charger for 2016, and they are all detailed below.

However, there are a few changes for the 2016 model year Challenger, beginning with the revival of Plum Crazy purple. This new hue will join B5 Blue and TorRed to create a trio of “high impact colors”. The Blacktop Appearance Group also returns for the 2016 Challenger in SXT and R/T trim, adding black 20 inch wheels, a black grille, a black rear spoiler, a black fuel door, a black strobe stripe, black seats in cloth or leather (depending on the package chosen), black bezels and black trim throughout the cockpit.

Those folks who buy the 2016 Dodge Challenger SRT Hellcat will pay a bit more than 2015 buyers, but they will get the premium Laguna leather and the premium UConnect infotainment package as standard equipment.

Finally, the 2016 Dodge Challenger will have 12 different wheel options, including the standard wheel options for each of the trimlines and optional rim designs available across a variety of packages.

The 2016 Dodge Charger
Like the 2016 Dodge Challenger, the 2016 model year Dodge Charger lineup is pretty much identical to the 2015 lineup, with the SXT, R/T, R/T Scat Pack, SRT 392 and SRT Hellcat trimlines all coming with the same engines, the same power levels and the same 8-speed automatic transmission – but that isn’t a bad thing by any stretch.

There are a few changes that are similar to those in the Challenger lineup, including the addition of Plum Crazy purple, standard UConnect and Laguna leather for the SRT Hellcat Charger and the return of the Blacktop Appearance Group for the SXT and R/T sedans.

Unique to the 2016 Charger is the Super Track Pak for the V6-powered SXT package that add Bilstein shocks and unique springs for improved handling and a half inch lower ride height. There is also a set of 3.07 gears and a shortcut button for the dedicated Dodge Performance Pages app, with acceleration timers, a g-force meter and more.

The pricing has not been announced for the full 2016 Dodge Challenger or Charger lineups, but with the Hellcat models getting a massive price increase for the new model year, we could see some smaller increases from the other packages. Once the full pricing is announced, you will find it here on TorqueNews.com.

Jay wrote on October 12, 2015 - 7:33pm Permalink
Will the Super Track Pak option still be available on the SXT and SXTpluor challenger for 2016 ? Iam told it is not showing up on the order form. Seems like a puzzling loss of the best option.
Kevin wrote on October 21, 2015 - 2:56pm Permalink
I am wondering the same thing, 2 different dealers said they can order it with super track and to wait a bit
Loyd Overstreet wrote on October 16, 2015 - 10:58am Permalink
Heard the transmission and reared for the 2016 HellCat is coming out of Germany. Unlike the 2015 Mercedes produced for the 2015 HellCat.
joel lane wrote on October 17, 2015 - 10:14am Permalink
ok you say Plum Crazy is back but then why did a Chrysler at a Dodge dealer tell me that plum crazy will only be on the hell cat , so i told them I guess im not ordering a new r/t with a scat pack shaker if you have any info please let me know
Jay wrote on October 18, 2015 - 11:30am Permalink
Not what I heard for 2016 I think Plum Crazy will be available on all the 6.4 cars as well as HCat. Maybe even the 5.7 s. The Dealer will know if you call them and start the order form.
Alfie wrote on October 24, 2015 - 12:47pm Permalink
Plum crazy is available in all models
Ryan wrote on November 20, 2015 - 8:08pm Permalink
Plum Crazy is not available in the base SE trim. Even with SXT you must opt for the upper level trim
Chris K. wrote on November 17, 2015 - 10:56pm Permalink
The super track pack was already available on 2015 v6s. I think it's an SXT Plus option. Not sure for 2016.
Aaron wrote on April 22, 2016 - 9:57pm Permalink
Plum crazy is available for SXT plus and above. The unique colors are not available in the standard SXT models. I have a 2015. I originally just wanted to get an SXT until I found out they didn't make those in B5 Blue.