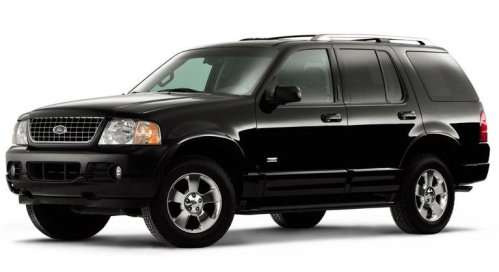 The National Highway Traffic Safety Administration has closed an investigation that included over 1.56 million Ford Motor Company sport utility vehicles over a concern that these vehicles could roll away – and the investigation has been closed without the feds requiring a recall or any further action by Ford.
Advertisement

The investigation into a trio of Ford Motor Company vehicles including the 2002-2005 Ford Explorer, the 2002-2005 Mercury Mariner and the 2003-2005 Lincoln Aviator was launched almost four years ago after the National Highway Traffic Safety Administration (NHTSA) received complaints of rollaway incidents in these popular sport utility vehicles.

After receiving roughly 180 complaints about these Ford SUVs, claiming that the vehicles rolled when they were supposed to be in Park, the NHTSA opened the preliminary investigation in April of 2009. That was elevated to an engineering analysis in August of that same year which is often the final step before the feds mandate a recall of the affected vehicles but the result of the engineering analysis was that no further action was required on the part of Ford Motor Company. In short – no recall will be issued to address the possible brake shift interlock assembly in the Explorer, Mariner and Aviator.

The NHTSA opted to close this investigation based on the fact that the number of complaints was very low in relation of the number of potentially affected vehicles. Vehicles with an actual transmission issue that allowed the vehicle to roll when it should have been in park was around 4.4 vehicles per 100,000 while those with problematic brake shift interlock assemblies were even lower – at just 3.4 units per 100,000 vehicles. This low rate of occurrence combined with the fact that the number of complaints had not continued to climb led the feds to believe that this was not a recall worthy issue.

Had the complaints continued to pile up during the 4 year investigation, there would have been a better chance of a recall that would reach over 1.56 million Ford SUVs but it seems that those 180 issues were isolated programs and not an issue that plagues all of the similarly equipped vehicles.

The good news for owners of these vehicles is that Ford issued a technical service bulletin to dealerships explaining that these Ford Explorers, Mercury Mariners and Lincoln Aviators may require more effort to shift them into park and replacing the shift interlock mechanism can remedy this issue. Also, Ford instructed the companies shipping these SUVs from the plant to the dealerships to apply the parking brake, which helps to prevent unneeded stress on the transmission during transportation.

When this investigation got underway in 2009, Ford Motor Company explained to the NHTSA that some of the problems with these vehicles were due to “drivers that do not follow basic, common sense vehicle driving practices that are consistent with safe vehicle operation may experience unintended vehicle movement while in park." This includes the people who don’t use their parking brake, which will prevent the vehicle from rolling no matter what gear is selected. Had those 180 people who had rollaway issues with their Ford, Mercury or Lincoln SUV simply applied the parking brake, their vehicle wouldn’t have been able to go anywhere.