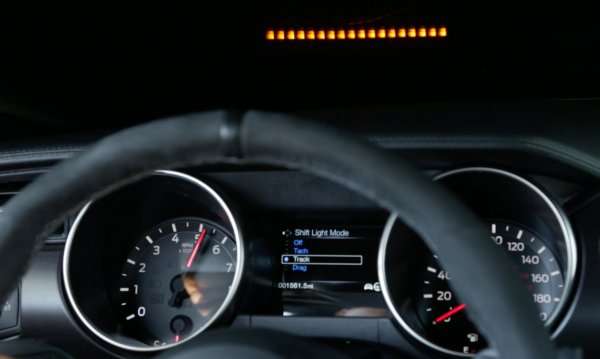 The 2015 Ford Shelby GT350 Mustang has a long list of standard features that should combine to make it the best-handling muscle car of all time, but simple new features like the heads up display shift light will make the 526 horsepower Mustang more user-friendly whether you are on the road or track.
Advertisement

However, Ford didn’t stop there, as they wanted to add some high tech razzle dazzle that offered as much usefulness as it does aesthetic appeal, so they have fitted the new Shelby GT350 Mustang with a heads up display with an integrated shift indicator.
You might be thinking that lots of cars have heads up displays with shift indicators or digital tachometers, so Ford went one step further, adding three different modes for their shift light feature – Tach Mode, Track Mode and Drag Mode.

3 Mode HUD Shift Light
The shift light in the heads up display for the 2015/2016 Ford Shelby GT350 Mustang is controlled through the driver information center, using the buttons on the steering wheel. The feature is technically called the Performance Shift Indicator and when turning it on, the driver can pick the shift RPM, and brightness of the indicator on the windshield, the display mode and whether or not there is an audible chime when it is time to shift.

The GT350 Mustang shift light can be set anywhere between 3,000 and 8,200 RPM and when activated, a row of amber dots appear on the windshield. In Tach Mode, the amber dots light up left to right as engine RPMs build. In Track Mode, the dots start on the left and right, both extending towards the middle as RPMs come up and when the shift point is reached, the entire row of dots flashes. Finally, in Drag Mode, the lights all light up and flash at once, only when the desired shift point is reached.

While many racers can shift by ear rather than by looking at the tach or waiting for a shift light, there is no question that having a shift indicator can help make the shifts more accurate. This should help make the Shelby GT350 and GT350R more consistent on the road course and the drag strip, while also adding a little extra high tech wow factor for those who just like having gadgets in their toys.