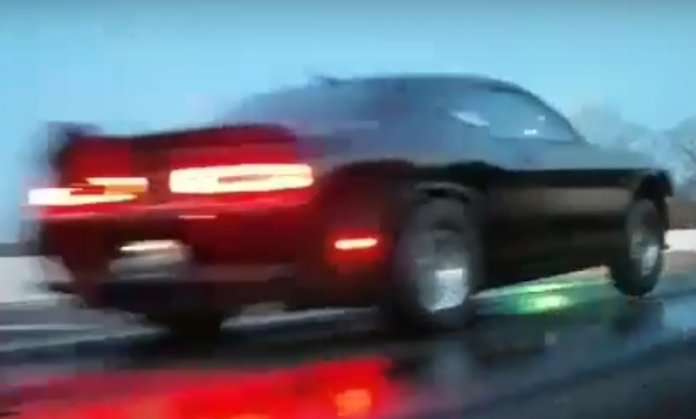 The world’s quickest Dodge Challenger SRT Hellcat just keeps on getting quicker, with the team of Leon, Jason and Logan Epling resetting the quarter mile record with a new best time of 8.68 at 155 miles per hour.
Advertisement

In the world of modern Mopars, the Dodge Challenger SRT Hellcat owned, built and campaigned by the Epling Garage team is one of the top dogs. The Epling car was the first Hellcat-powered car to break into the 8-second quarter mile range and while the family team has faced some competition for the title – the Elping Challenger has spent the majority of this calendar year as the world’s quickest Hellcat car.

Although many tracks around the United States, the Epling Garage team keeps on heading to the few tracks that are still open, allowing them to run in better and better air. As a result, the combination of better air, tuning adjustments and seat time has allowed Jason Elping to once again reset the Hellcat quarter mile world record, this time running an 8.68 at 155 miles per hour.

In case you have somehow missed all of our other articles on the Epling Garage Dodge Challenger SRT Hellcat, we last talked about it back on November 20th, when the team had reclaimed the quarter mile world record in running an 8.71 at 157.429 miles per hour. That beat the previous record set by Josh Schwartz in the Hellcat Challenger known as TopCat (which ran an 8.883), while putting the Epling car far above anyone else in the Hellcat racing world.

However, father Leon, son Jason and grandson Logan werent done. They knew that their Hellcat Challenger had more in it, so they headed back to the track this weekend with the hopes of running even better times. Needless to say, their hopes were met with fantastic results.

After a day of solid runs, Jason Epling piloted the black Hellcat Challenger down the quarter mile in just 8.68 seconds. The car lost traction around the 1000-foot mark, causing Jason to pedal out of it a bit and as a result, he “only” trapped 155 miles per hour, so the speed was slower than their previous record, but the elapsed time is the new Hellcat world record.

As a reminder, the supercharged Hellcat Hemi in the Elping Garage Challenger has never been opened up. From the supercharger lid to the oil pan, the engine is stock, with the only engine changes being a smaller upper pulley, larger fuel injectors, an upgraded fuel pump, a nitrous oxide system and a tune from Hellcat mastermind Tim Barth. Behind that relatively stock engine, this Hellcat Challenger has a Liberty manual transmission with a pro stock style clutch, a Knoxville Driveline 1 piece steel driveshaft, a 9” rearend from the Driveshaft Shop, 35 spline axles from the Driveshaft Shop, lightweight Holeshot 15” wheels wrapped in 29 inch Hoosier slicks and a custom coilover suspension setup.

The videos below show the Epling record run from a few different angles. The rear angle shows how hard the car headed towards the center stripe around the 1000-foot mark, while the others show just how hard this Challenger rips away from the line. Also, this Hellcat sounds incredible, so make sure to have your speakers cranked up when watching.