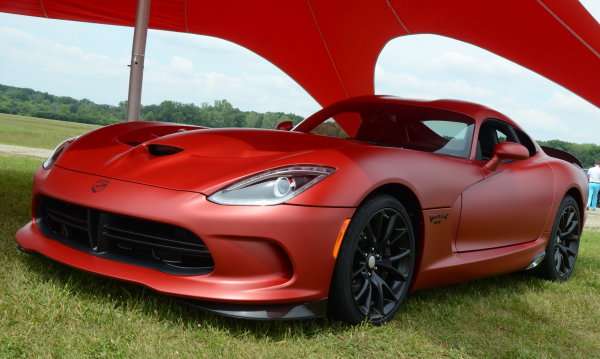 Since it was announced that the Hellcat Hemi in the Dodge Challenger and Charger packs 707 horsepower, there have been people calling for a Dodge Viper packing the supercharged mill, but in reading through discussions online and in speaking with Chrysler Group execs – a great many people in the Mopar world would rather not see a Hellcat Viper.
Advertisement

The 2015 Dodge Viper is powered by a naturally aspirated V10 engine offering 645 horsepower and 600lb-ft of torque while the 2015 Dodge Challenger SRT Hellcat is powered by a supercharged V8 engine offering 707 horsepower and 650lb-ft of torque. When it was announced a little over a year ago that the Hellcat Challenger would have a great deal more horsepower and torque than the mighty Viper, some people around the automotive world began pushing for a Hellcat-powered Viper and the idea of a supercharged V8 Viper quickly spread across the various enthusiast forums and social networks.

Interestingly, in reading through discussions among fans of the Dodge brand – both on Facebook and on different enthusiast forums – many faithful Mopar lovers would rather not see a Hellcat Viper. When speaking with folks within the Chrysler Group, that sentiment is shared among the people making the decisions on the future of the high performance Dodge products.

Why Enthusiasts Don’t Want a Hellcat Viper
While some Mopar and Dodge fans love the idea of packing more power into the Viper no matter what the mans, it seems that a great many enthusiasts would rather not see the company switch from the V10 to the Hellcat Hemi. Since the Viper was introduced as a concept car back in the late 1980s, it has been powered by a V10 and while a collection of European supercars have since gone to the V10 design – the Viper had the V10 in a time where having 10 cylinders was groundbreaking.

While the performance and styling of the Dodge Viper are a big part of what makes these American supercars so special, there is no denying the added “wow factor” that comes with opening the hood and feasting your eyes on a big, beautiful V10. The V10 has always served as the heart of the Viper and, not surprisingly, most Mopar fans don’t want to see the V10 disappear from the future Viper spec sheet.

Chrysler Doesn’t Want a Hellcat Viper, Either
At the introduction of the newest Dodge Viper ACR a few months back, Dodge brand CEO Tim Kuniskis addressed the question of improving the 5th gen Viper. Of course, the idea of swapping the Hellcat in place of the V10 came up internally, but there were two key issues with a Hellcat Viper.

First and foremost, the Dodge team stated early on that the Hellcat Hemi V8 was just too big to fit into the engine bay of the 5th gen Viper. The Hellcat Hemi is too wide and too tall to fit, so it would take significant cutting and reconstruction work just to make it fit. I am sure that we will eventually see a Viper with a Hellcat Hemi, but it will take far more work than just dropping in the engine.

Second, and more importantly, there is the weight of the Hellcat Hemi compared to the Viper V10. This was the angle that Kuniskis pointed out at the Viper ACR launch, as the extra weight of the Hellcat Hemi might be countered by the power advantage, but nothing would offset the fact that there would be a great deal more weight over the front end of the car. This would destroy the perfect weight balance of the modern Viper and negatively impact handling, so even if the car was a little quicker in a straight line, a 5th gen Viper with a much heavier engine up front would not hammer the corners as well as the current Viper with the V10.

Of course, there is also the problem that the Chrysler Group cannot currently built the Hellcat Hemi quickly enough to meet the demand for the Dodge Challenger and Dodge Charger SRT models with the 707hp engine, but in the end – the Hellcat Hemi won’t fit in the Viper engine bay and it would ruin the handling characteristics of the sleek supercar.