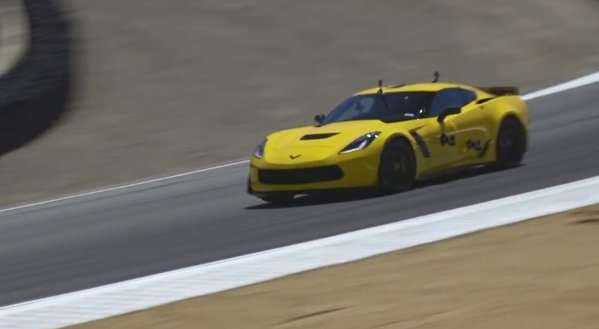 Randy Pobst recently took to the hills of Laguna Seca Raceway in the 2015 Chevrolet Corvette Z06 as part of Motor Trend’s Best Driver’s Car testing process and the results were shockingly bad – with the Pobst slamming the LT4 V8 for a lack of power on the straightaways caused by unknown engine problems.
Advertisement

The 2015 Chevrolet Corvette Z06 has been billed by GM since day 1 as the most track capable Corvette of all time and when considering some of the monster Corvettes of the past half century, that is a pretty big claim. The Corvette Z06 proved that it was a force to be reckoned with when it won Car and Driver’s Lightning Lap shootout, but when it came time for the folks at Motor Trend to put the C7 Z06 through the paces of the Best Driver’s Car, the supercharged American supercar ran into mechanical issues that resulted in a poor lap time and an even worse review by driver Randy Pobst.

A Lap of Laguna Seca in the Z06
The video below shows the 2015 Chevrolet Corvette Z06 coupe being piloted by professional racer and Motor Trend regular Randy Pobst. Pobst has turned in some crazy fast laps in past Corvettes at Laguna Seca so he is an excellent choice for pushing the new Corvette Z06 to its limits on the Cali road course.

The most track capable Corvette ever with a driver who has historically been very fast in Corvettes on this very track – it seems like the perfect combination for insanely fast lap times in the Motor Trend contest. Unfortunately, the 650 horsepower LT4 V8 under the hood had different ideas.

Shortly into the run, Pobst begins to voice his concerns about the lack of power coming out of turns, going so far as to refer to the Corvette Z06 as a sick puppy. He praises the braking and cornering capabilities, but he repeatedly discusses the lack of power on the straights, which ultimately leads to what he considers to be a poor lap time. He went so far as to compare the new Corvette Z06 to a 1962 Ford Falcon and having driven a '62 Falcon, that is a pretty serious insult to the super-Vette.

Mechanic Gremlins Happen
While this engine issue may kill the C7 Corvette Z06 coupe’s chances of winning the Best Driver’s Car award from Motor Trend this year, this is the kind of unfortunate issue that anyone can run into in the racing world. It has been discussed online that the Corvette Z06 may have actually been experiencing the “hot engine limp mode” that owners have complained about, but you would think that Motor Trend would know to avoid that issue. In short, it seems that an unusual engine problem caused a misfire in the new Z06 and as a result, the Corvette might not win this time.

Fortunately, the new Corvette has won so many awards that one more honor could go unnoticed, but I would bet that at some point in the near future, GM will have Motor Trend and Pobst hooked up with another, proper-running Z06 to tackle Laguna Seca.
In the meantime, check out the video below of the 2015 Corvette Z06 blasting around Laguna Seca via Motor Trend. The lap time may not be great, but it is still an awesome action video of the new Z06.

Mark Day wrote on October 3, 2015 - 6:46pm Permalink
The DNA at Chevrolet remains the same, generation after generation - questionable reliability/engineering. Blown engines in previous Z06s along with overheating - perfect - a track car that won't track. A lot of sizzle but ultimately disappointing.
Skip Sizemore wrote on October 6, 2015 - 12:52pm Permalink
The article says GM will get Motor Trend another Corvette Z06 that will run as it should. That is fine but why didn't they do that in the first place. What if a customer had deal with this car. Talk about shooting yourself in the foot. Come on GM get your quality should it should be. Right the first time.
mark Rolnick wrote on April 29, 2017 - 8:12pm Permalink
A customer is dealing with this issue right now and that's me! I believe I'm experiencing the same exact problem and I've had it in the dealerships now three or four times and they have yet to diagnose the problem and insisted really not an issue. If they give two craps about me as a did with Motor Trend in the review they would fix this problem immediately
Alfred Scott wrote on May 13, 2017 - 12:10pm Permalink
After posting I did end up installing a Dewitts C7 Z06 Competition Radiator - GEN2 about $940 and a GM aftermarket intercooler that GM developed for the car for guys tracking the car. your dealer should be able to find it. Between both of these, I have no issues with my car now and it is still under warranty!
Alfred Scott wrote on October 15, 2015 - 7:29pm Permalink
I concur that the car has heating issues when driven on a race track hard. I own a 2015 Z06 Z07 and I am a member of Monticello Motor Club. This is a private member race track which has over a 4 mile road course with many turns and straights. The car over heats on the race track when driven hard above 70 degrees which is pretty much the entire summer. I love the car but very disappointed that I cannot drive the most track-capable Corvette on the track for more then a few laps without over heating and power loss. GM should have offered with its Z07 package a solution to this with a higher price for those that truly want to track their cars.
Charles Lewis wrote on April 14, 2016 - 5:35pm Permalink
2016 Corvette with less than 1500 miles. Noisy Rocker arm since day one. Today, "0" oil pressure. Local Vehicle transported to Enterprise Chevy dealer for repairs.. 6 hours later, customer called dealer when shop foreman stated heads must be removed to make necessary modifications (unspecified) ?? Dealer states parts or modification needs are not in stock?. Dealer advised customer to call tomorrow possibly it will be known when replacement parts will likely be available?
Mark Day wrote on April 14, 2016 - 9:48pm Permalink
Fairly recent on GM/Chevrolet AFM – Active Fuel Management – 4/8 cylinders. Wonder if that's the issue? Maybe post on Torque News when known – thanks. "GM's current Active Fuel Management technology uses a solenoid to deactivate the lifters on selected cylinders of a pushrod V-layout engine."
tom janman wrote on February 15, 2019 - 2:51pm Permalink
2018 camaro zl1 1le car has 3000 miles oil consumption has become problem took to dealer was told it has an internal problem what kind of problem?

LG's New EV Battery Plant Is a Welcome News for Tesla
Tesla Giga Berlin's New Hurdle: It's Not Only the Gov't, but Now Tesla Itself
END_OF_DOCUMENT_TOKEN_TO_BE_REPLACED