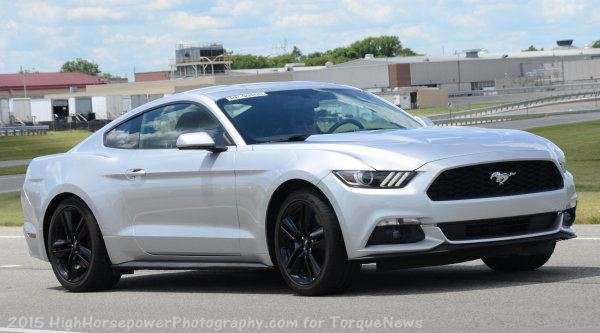 While the individual sales numbers for each engine are not available yet, the 2015 Ford Mustang EcoBoost has been such a hit with the media and the performance aftermarket alike make it very clear that the American performance car market is accepting of a 4-cylinder muscle car – further showing the need to follow suit and roll out a 6th gen Camaro with their own turbo 4.
Advertisement

In the past year, the automotive world has been focused on the gradual rollout of the next generation Ford Mustang, but the introduction of that new pony car got us talking about the next generation Chevrolet Camaro. One of the most common discussions has centered around whether or not General Motors would offered a Camaro with a turbocharged 4-cylinder to rival Ford’s new EcoBoost Mustang. There have been reports to suggest that GM would not offer a 4-cylinder 6th gen Camaro, but there have also been reports that there would be a boosted 4-cylinder Camaro.

At one point, I spoke with a GM employee who had read an article of mine discussing reports that there would not be a 4-cylinder Camaro. There had been a conversation with Camaro boss Al Oppenheiser, in which a comment was made about him not wanting to see a 4-cylinder Camaro. That spawned reports that there was no turbo 4 Camaro on the way, but this particular inside source told me that Oppenheiser’s comments were reported out of context.

Through all of these reports suggesting different ideas about the next generation Camaro, we really didn’t get any solid evidence to support either side of the argument. However, the early popularity of the 2015 Ford Mustang EcoBoost – both with the media and with the performance aftermarket – shows that there is definitely a place for 4-cylinder muscle cars.

The Mustang EcoBoost Shines
While Ford Motor Company hasn’t offered any sales breakdowns by engine for the 2015 Ford Mustang, we know that the next generation Mustang is selling very well. I have seen more than a few EcoBoost Mustang owners posting on the various social media sites and enthusiast forums, all of whom have nothing but good things to say about the 2.3L turbo engine. Also, every media member Ive spoken with after they drove the EcoBoost Mustang was very impressed by the package on every level.

Finally, the performance aftermarket has been quick to fall in love with the 2015 Ford Mustang EcoBoost, with some shops already offering performance ECU tunes that add impressive levels of power over stock. A very important key to the success of a performance car is aftermarket support, and not only have a great many companies been quick to offer parts for the EcoBoost engine, but they have gotten very strong gains from these components when combined with a good engine tune.

The EcoBoost Mustang is the most efficient muscle car sold in America, but Ford has reached these strong fuel economy figures without compromising power. Best of all, those Mustang EcoBoost buyers who want more power will be able to get that power through the aftermarket without spending a whole lot of money.

Will GM Let the Mustang Win a Battle without a Fight?
The current muscle car war in the United States is a series of battles of inches between the Chevrolet Camaro and the Ford Mustang. The Dodge Challenger might be the most powerful of the Detroit muscle cars, but without a convertible and with sales figures that are generally lower than the other two, the war is really being waged between the Mustang and the Camaro. Chevrolet rolls out a new Camaro package, Ford counters with a comparable Mustang. Ford offers up a little more power in their V6, the Camaro V6 gets a bump in power. The segment is all about 1-upping the other and if GM doesn’t offer a turbocharged 4-cylinder 6th gen Camaro, they will be letting Ford win one of the small battles without any challenge.

While muscle car traditionalists hate the EcoBoost Mustang, there is no denying that there are plenty of motoring enthusiasts in the younger generation who love the idea of a turbocharged 4-cylinder Mustang and with the aftermarket jumping into the 2015 Mustang with both feet, there is even more appeal for the boosted Mustang. There is clearly a demand for a turbo 4 muscle car, and with Ford working to supply those products, I would be blown away if GM didn’t build a Camaro to compete for some of that budding segment.

Finally, the 2015 Ford Mustang EcoBoost will be helpful in improving global sales, as it serves as the base model in many markets under the 5.0L V8. The Camaro is also available in many of those segments, but only with the 6.2L V8. This means that the cost of getting into a Camaro overseas is much higher than the Mustang, giving the Ford a big advantage in the global muscle car sales race.

The next generation Chevrolet Camaro should be introduced within the next few months – possibly in April at the New York International Auto Show – and at that point, we should have a much better look at the future of the Mustang-Camaro war.

jazula wrote on February 7, 2015 - 9:39pm Permalink
Best car
Kevin Meyer wrote on February 11, 2015 - 9:24am Permalink
I disagree. I believe that the Chevy Camaro would do just fine with a V-6 base and a V-8 SS model. Chevy has never released a 4 cylinder Camaro, and I do not see them starting that. I do however believe they will put the Cylinder Deactivation, Active Fuel Management, and all the other fuel saving techniques that they have in the Corvette. I also expect to see a 7 speed manual with the rev-matching technology.
Ron Davenport wrote on February 12, 2015 - 11:13pm Permalink
In the early years of the 3rd Generation Camaro, there was a 4 cylinder motor offered (nickname "Iron Duke" with 90 hp).
Bob wrote on April 20, 2015 - 8:03pm Permalink
Yes. iron Duke. America was never told. It was a farm tractor engine from Brazil with a differen cam. Usual piece of GM crap. Gee I wonder why they went under.