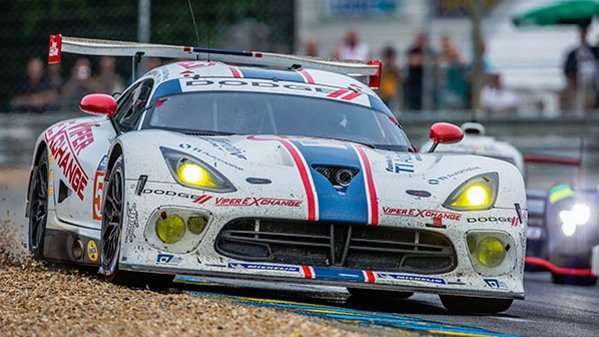 This past weekend marked the return of the Dodge Viper to the 24 Hours of LeMans Race and while both the drivers and the car looked great throughout much of the race, mechanical issues in the final hours forced the Viper team to watch the end of the race from the garage area.
Advertisement

After the factory-based Dodge Viper racing program won the IMSA Tudor GTLM championship last year, the Chrysler Group pulled the plug on the program, but Riley Motorsports, TI Automotive and the Viper Exchange all teamed up to go racing in 2015 in the American endurance series. Strong success in the new GT Daytona class of the IMSA Tudor United Sports Car Championship led to a reserve position for the 2015 24 Hours of LeMans race and when one of the cars had to withdraw ahead of the race – the Viper got an official entry into the world’s most legendary endurance race.

Qualifying and the Early Hours
Things in France started off well for the Viper team, with drivers Ben Keating, Jeroen Bleekemolen and Marc Miller all looking strong in practice and come qualifying, the Riley Viper was able to turn in the 4th best time in the GTE Am class, 46th overall. For comparison, the Chevrolet Corvette C7R that ended up winning the faster GTE Pro class started just one spot ahead of the Viper, in 45th.

Jeroen Bleekemolen started the race behind the wheel of the #53 Dodge Viper and during the early mix up, he slipped back to 8th place at the end of the first hour – although it should be noted that his times were in the same ballpark as the quickest cars in the GTE Am field. At the end of hour #2, the Viper had moved up to 5th and in the middle of the 3rd hour, Bleekemolen had pulled the Riley Dodge into the lead spot in the class. He spent much of the 3rd hour in the lead before handing over the duties to Ben Keating.

Keating Hits the Track
After the Dodge Viper spent most of hour 3 leading the GTE Am class of the 24 Hours of LeMans race, Ben Keating got into the car for his first actual racing action on the fabled French road course. Keating kept the #53 Viper around the front of the field, sitting in 3rd place throughout much of the 4th and 5th hours. Unfortunately, during the 6th hour Keating quickly ran off track through some stones. While he was able to get right back on the track and he only dropped to 5th, there had been some unforeseen damage done to the car.

Keating climbed back to 4th in class before heading into the pits to give Marc Miller his first racing action at LeMans.

Marc Miller Gets a Rocky Start
Marc Miller climbed into the #53 Dodge Viper for his first racing action in the 24 Hours of LeMans race, but after making just one lap around the track, he headed back into the pits for what ended up being a costly problem. It turns out that when Keating ran off track before the driver change, the rocks that kicked up damaged the alternator belt, so the team had to take the Viper behind the wall to address the belt problem. They were back out in a hurry, but the car lost two laps to the leader – seriously impacting their chances of winning at LeMans.

Even with dropping two laps down, Miller hit the track with the hopes of making the most of his seat time. He managed to sit in the 6th spot (two laps down) at the end of the 7th hour and throughout the 8th, 9th and 10th hours, Miller maintained the 6th position in class while continuing to turn laps just as fast as the class leaders. It should be noted that during the 8th hour, the only Corvette C7R in the GTE Am class dropped out of the race, leaving the Viper as the only American can in the class.

During the 11th hour, the #53 Viper pushed up into the 5th spot and that was where the team stood when the halfway point (12 hour mark) was reached.

Into the Morning Hours
The #53 Dodge Viper team would spend the 13th through 16th hours sitting two laps down in the 5th spot and the drivers continued to turn competitive laps times – showing that the belt issue truly had knocked them out of winning contention. In fact, during the 17th hour of the race, Jeroen Bleekemolen managed to turn the fastest lap of the race for the GTE Am class. No other cars in the class would come close to challenging the Viper teams lap time through the end of the race.

The End Comes Early
However, during that 17th hour – even while turning the quickest laps of the event – Bleekemolen was noticing a problem with the gearbox. Despite the shifting issue, he managed to keep the Viper in the 5th position in class through the 19th, 20th and 21st hours, but that came to an end during the 22nd hour. At that point, the shifting had become nearly impossible, so the team worked to replace some components and the Viper headed back onto the track, then 8 laps back in 7th place.

Unfortunately, during the 23rd hour, the transmission failed altogether and the #53 Viper was officially retired from the race – just over an hour and a half from the checkered flag.

“We had good speed,” Bleekemolen said. “We were leading the race and posted the fastest lap, so I will go home with good feelings but, unfortunately, not a trophy. The gearbox just wouldn't shift anymore. There was some stuff in the gearbox, metal from the previous one, and it just wouldn’t work any longer.”

While it was a disappointing blow to the Viper team and their fans, the bright side to this all is that the Dodge Viper team went to LeMans without factory backing and ran with the best cars and drivers in the world. The mechanical gremlins took their toll, but it cannot be ignored that the Viper was the fastest car in the GTE Am class – setting the stage for what could be a successful remainder of the 2015 United Sports Car Championship season in the US.