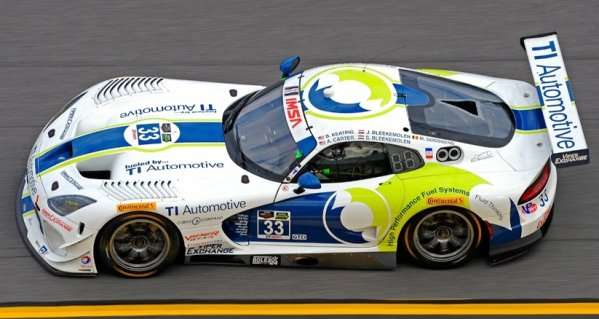 Dodge Viper Excluded from 24 Hours of LeMans (For Now)

After winning the GTD class in the Rolex 24, the Riley Motorsports Dodge Viper GT3-R team had hoped to take a run at the GTE Am class of the 24 Hours of LeMans, but when the official entry list was announced late last week, the Viper team finds themselves on the outside looking in.
Advertisement

When the Chrysler Group pulled factory backing from the Dodge Viper endurance racing program, racing fans figured that yet another sport in which the Mopar supercars dominated would fall by the wayside. Fortunately, Riley Motorsports – the shop responsible for building the GTLM championship Viper GTS-R cars in 2014 – teamed up with the Viper Exchange team to field a pair of cars at the 2015 Rolex 24 at Daytona. The result was a win for the Viper team in their first race in the season and it was a dominating win, securing the Viper’s place in the Tudor United SportsCar Championship this season.

In addition to taking a run at the GTD championship in the US endurance racing leagues, Riley Motorsports had hoped to take one of their cars to France for the 24 Hours of LeMans race, but when the 56-car entry list was announced, the #53 Riley Viper did not make the cut. This means that if nothing changes, the Viper will not be among the 56 cars racing at LeMans, but there is still a decent chance that the Viper could make its way into the 83th running of the famous race.

#53 Viper is the First Reserve Car
The 24 Hours of LeMans has four classes with 56 total vehicles, including 13 cars in the GTE Am class in which the Viper would compete. Unfortunately, the Viper is not one of those cars, but the Riley team is the first name on the Reserve list. When the LeMans organizers pick the 56 teams on the official entry list, they also pick a handful of cars for a Reserve List. For 2015, there are 7 cars on Reserve, with 4 GTE Am cars and 3 Prototype cars, and the Viper is the first car on the list. This means that if a car drops from the GTE Am class, the Viper is in and since there are no reserve cars from the GTE Pro class, a withdraw of one of the quicker production based racers would also allow the Viper to get into the race. Finally, with only three prototype teams on the Reserve List, if at least three cars from P1 or P2 were to drop out of the race, the Riley Viper will get the invite.

The Odds are Pretty Good
The 2015 24 Hours of LeMans race is in mid-June and between then and now, there is a good chance that at least one of the GTE production racers could find themselves unable to make it to France for the big race. In each of the past few years, there have been drops in both the Prototype and GTE classes, so the odds are in Team Viper’s favor.

Should the #53 Viper GT3-R make it into the 24 Hours of LeMans field, it will be piloted by Jeroen Bleekemolen and Ben Keating, as well as one more driver from the Viper teams at the Rolex 24. This would likely be Kuno Wittmer, Dominik Farnbacher, Al Carter or Cameron Lawrence, but there might not be an official announcement on the third driver unless the team gets the invite to the race.

Gus Crowell wrote on March 27, 2015 - 10:03am Permalink
They really need to get Wittmer and Farnbacher back into the driver seat after what at Sebring without them in the #93 car!.

Tesla Giga Berlin's New Hurdle: It's Not Only the Gov't, but Now Tesla Itself
Teslas Are Sold Out Until 2023, But The Timing May Reverse
END_OF_DOCUMENT_TOKEN_TO_BE_REPLACED