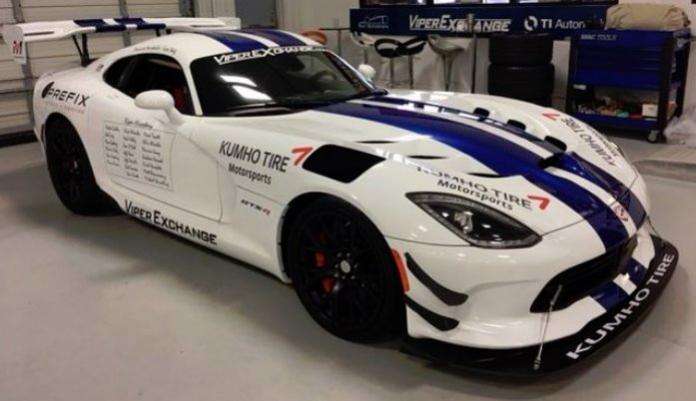 Dodge Viper ACR Runs a 7:01 at the Ring - then Crashes

The second attempt by the fan-funded Dodge Viper ACR Nurburgring record team resulted in a new best for the Mopar supercar, but it still fell short of the Porsche 918 production record and worse yet – one car ran into mechanical issues and the other crashed.
Advertisement

The Dodge Viper American Club Racer (ACR) Nurburgring record team headed back to Germany last week for another fan-funded run at the production road car record. Last month, the team was able to set a new production record for American cars, rear wheel drive cars and manual transmission cars, but with a 7:03, it fell 6 seconds short of the Porsche 918’s record of 6:57. That entire trip was plagued with unusual mechanical issues and rain, so the organizers stated that if they could acquire more funding, they would head back to “the Ring” in August for another shot.

Well, that funding came through and the pair of Dodge Viper ACRs headed back to the Nurburgring for another run at the Porsche record. The team knew that they could go faster – and they did – but they still weren’t able to beat the Porsche and after one car ran into terminal mechanical issues, the other car crashed.

When the Dodge Viper ACR teams headed to Germany back in July, they did so with two cars and two drivers – Luca Stoltz and Dominik Farnbacher. During that trip, Farnbacher was able to run a 7:03.45 before a radio component required by the track fell from under the dash and got lodged behind the brake and clutch pedals. On top of that odd problem, repeated rain storms and some rear wheel bearing failures earlier in the runs, the team couldn’t get the time that they wanted, but they still turned in a solid time.

That 7:03.45 set a new production road car record for American cars, rear wheel drive cars and cars with a manual transmission – leaving only the hybrid, all-wheel drive Porsche 918 and its lightning quick automatic transmission higher on the accepted production car record list. However, the team knew that the Viper could go faster, so they asked Viper Nation for the funds to travel back to the Nurburgring in late August, and once again, Viper Nation came through.

On the second trip to the Nurburgring, the team had the same two Viper ACRs and the drivers from the first attempt, but they also added Dominik’s brother Mario Farnbacher – another accomplished road racer.

The second attempt at the Nurburgring production road car record started off very well for the Dodge Viper ACR, with repeated lap times in the 7:03 range allowing the team to back up their previous record multiple times. Not only is it the fastest American car to lap the Ring, but it is consistent in doing so. However, this trip wasn’t about being consistent – it was about setting records, so the team stayed at it.

After several promising days of practice, both Farnbachers had to leave to head to the track in their own cars, leaving Luca and a Nurburgring pro named Lance Arnold to handle the record runs. Things were going well at first, but one of the Kumho tires on Luca’s car failed, killing the lap and forcing him back to the pits for new tires. Shortly after, the drain plug came loose after someone on the team failed to properly tighten it, allowing the fluid to leak out and causing the rear differential to fail.

One Viper was down for the count, but the Viper ACR driven by Lance Arnold still had a shot. On his first hard, clear lap, Arnold laid down a 7:01.3 and on his second run, he was on pace to run well into the 6-minute range, when tragedy struck. On the long final straightaway, the left front tire of the Dodge supercar failed, sending the car towards the left side guard rail. Arnold avoided hitting that wall, but in correcting the car, it came back across the track and hit the wall hard with the right front corner of the Viper ACR.

So close yet so far away – the Dodge Viper ACR team had to “settle” for a 7:01.3. They fell short of the Porsche 918 record of 6:57, but they still raised the bar for American cars, rear wheel drive cars and cars with a manual transmission.

The Problem is the Tires

While the Dodge Viper ACR record team has been quick to point out how helpful Kumho has been in providing tires for the Nurburgring record run, there is no question that the Kumho tires are the shortcoming with the Viper. During testing, the team found that the tires were effectively cooked after a couple of laps on the 12+ mile road course, so while they are amazing tires for shorter tracks – allowing the Viper ACR to set more than a dozen track lap records around North America – these just aren’t the right tires for the Nurburgring.

With better tires, there is little question that the final Dodge Viper ACR could run in the 6-minute range at the Nurburgring, but for now, it appears as though the record for the Mopar supercar will stand at 7:01.3.