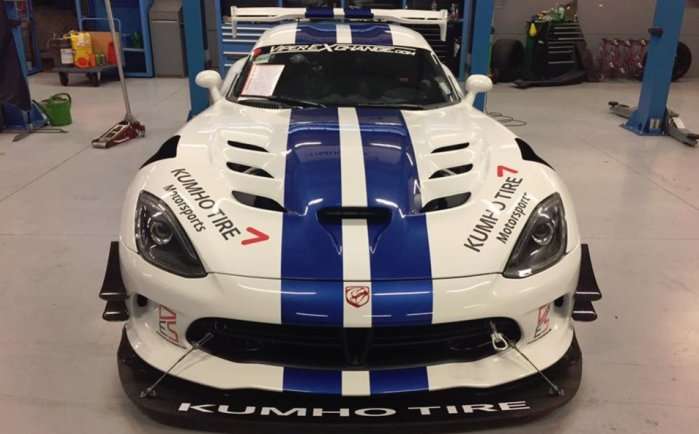 The group attempting to set the production road car record at the Nurburgring with the 2017 Dodge Viper ACR will be going back later this month for another run at the record, thanks again the contributions from Viper fans around the world.
Advertisement

Late last month, a group of volunteers traveled to the Nurburgring in Germany with a pair of Dodge Viper ACRs and the goal of setting a new production road car record on the world’s toughest race course - and they did so crowd-sourced funding amounting to more than $150,000. Unfortunately, a combination of odd mechanical problems and rainy weather prevented the team from getting as much good track time as they had originally planned, so hot-shoe Dominik Farnbacher only got to make a couple of good laps on a dry track without traffic, but he made the most of those few laps.

Viper Runs a 7:03
Even with only a handful of good laps, Farnbacher and the 2017 Viper ACR were able to turn a lap time of 7:03.45 on the 12.9 mile road course, beating the previous generation Viper ACR by nearly 10 seconds. That 7:03 lap makes the new Viper ACR the fastest American car, the quickest rear wheel drive car and the quickest manual transmission car to lap the Nurburgring Nordschleife.

7:03.45 was a great time for the 2017 Dodge Viper ACR, but the team left Germany unhappy. They had expected to run in the 6-minute range and, more importantly, they planned to beat the 6:57 lap turned in by the Porsche 918 Spyder and set a new production road car record. Farnbacher seemed to be on pace for a lap in the 6s, but that ended when a radio device required by the track management fell from behind the dash, lodging itself behind the brake and clutch pedal and killing the lap. The Viper returned to the pits to remove the electrical device from behind the pedals, but while that was going on, more rain showed up and ended the final day.

When the Viper team headed home, they stated that they could find the time to head back to the Nurburgring with the 2017 Dodge Viper ACR in August, but they would need to raise around $50,000 to do so.

Yesterday, the following message was posted on the official Viper record effort Facebook page:
Two things are official: our 7:03:45 for the very first (and only) lap at the ring, and 2) WE'RE GOING BACK THIS MONTH. Because of the generosity of some sponsors who have stepped up, and because of the Viper Nation's generosity on gofundme, we feel we have enough for the return.

I'd like to thank Doug Seal of Willowbrook Chrysler in Canada, Dan Snyder Motorsports, Quaker Chemicals, Clay Robbins Motors, and our continual patron saint, KUMHO TIRES. Without Kumho, we wouldn't be here. Their generosity and support is stunning and I hope that you honor them by choosing their very excellent tires, whenever you can. You have no idea how supportive they have been. THANK YOU KUMHO.

Stand by for details of our return. Here's my promise: a lap in the 6's.

So there you have it. We don’t know exactly when, but we know for sure that the Viper team will be headed back to Germany later in August for another Nurburgring production road car record attempt and ahead of doing so – the group is essentially guaranteeing a lap in the 6-minute range.

Provided that the team can get clear skies and avoid any odd mechanical problems, it seems likely that Dominik Farnbacher and the 2017 Dodge Viper ACR could take a real shot at the Porsche record – and maybe even beat the unwitnessed Lamborghini times.

Needless to say, you will be able to find any news on this Dodge Viper Nurburgring record here on TorqueNews.com.

Image Source: The Official Facebook page of The Viper Ring Record Run Powered by Kumho and Co-sponsored by Prefix

sandro varrocci wrote on August 7, 2017 - 6:28pm Permalink
i know the viper acr will hit less than 7 min for sure , go viper go , and out with a bang , and hopfully chrysler will change there mind and bring back the viper again with the monster v-10 and light weight car and a convertable this time please
thomas Hilton wrote on August 10, 2017 - 1:21am Permalink
FCA didnt kill the Viper, infact they want to continue it But because of Constant changes to Crash Safety Regulations, and CAFE, FCA cant afford to update such a car for the Mandatory Regulations that would cost Millions and prompt a total design change if they could afford it. So its the Government that killed the Viper.
Sandro wrote on August 11, 2017 - 5:24pm Permalink
Okay , but when they were complaining that the sales were down why didn't they make a convertible first like all the other vipers because they did sell more convertibles and coups
thomas Hilton wrote on August 11, 2017 - 7:02pm Permalink
The 1st vipers weren’t convertibles, they were roadsters (targa top). The gen 3 viper was designed as a convertible 1st coupe second, different from the gen 5. The company that paints all the vipers did have viper conversion for a convertible but it was more expensive than the base gTs trim.