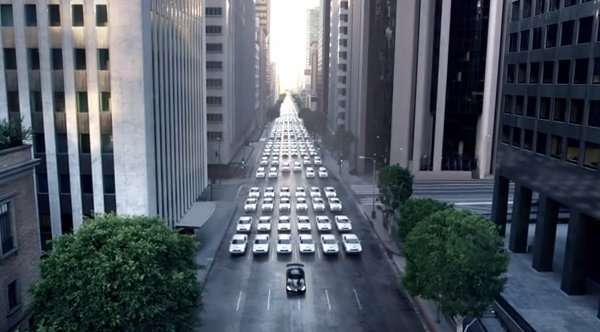 The Dodge Viper ACR is Darth Vader of the Automotive Empire

The Chrysler Group is using the popularity of the new Star Wars movie to promote their vehicles and in a new TV commercial, the Dodge Viper plays the role of Darth Vader while scores of Hellcat Challengers and Chargers serve as the black and white Stormtroopers.
Advertisement

Star Wars: The Force Awakens opens in a few weeks and this latest episode of the legendary series is arguably the most anticipated movie of the year. Even though there are no cars in the futuristic series, the Chrysler Group has teamed up with the Star Wars team for a collection of movie-themed marketing moves with the first being the New York City Uber Dodge Charger Hellcats painted like a Stormtrooper Hot Wheels toy. Next, there was a Stormtrooper-themed Fiat 500 at the LA Auto Show and now we have an awesome TV commercial featuring a black Dodge Viper and an endless stream of white Challengers and Chargers in tow, many of which appear to be Hellcat or SRT 392 models.

The Dodge Automotive Empire
In several of the Star Wars movies, we see Darth Vader or some other menacing leader in a dark uniform leading thousands of Stormtroopers in bright white and in this new Dodge commercial, a black Viper ACR leads a huge group of white Hellcat Challengers and Chargers as they flow down a broad city street. In the background, we hear the same ominous music that we hear when Darth Vader leads his troops and in much the same way that the peasants in Star Wars would fear the sight of the Empire marching in formation – the group of high performance Dodge cars would certainly strike fear into the heart of pretty much any other performance car driver.

As the Chargers and Challengers roll through the city with the Viper ACR at the lead – all revving their engines - we see the startled reaction of onlookers, including a guy who looks an awful lot like Shia LaBeouf. Then we see the intended destination of this massive group of high performance Dodge vehicles…a movie theater where Star Wars: The Force Awakens is playing.

The valets look concerned at seeing the hundreds and hundreds of Dodge Hellcat Challengers and Chargers lead by the Dodge Viper ACR, but having worked as a valet for a few years in college – I can promise everyone that these valets would have had the best work day of their lives.

This commercial is pretty fitting, considering that Dodge is kind of the dark horse of the American automotive performance market and with the Dodge Viper ACR proving itself as the baddest mamma-jamma in the modern supercar world, of course the Viper would be Darth Vader. The force is pretty clearly strong with this one and as for the Challengers and Chargers, there are no cars in their segments that can pack as much muscle.