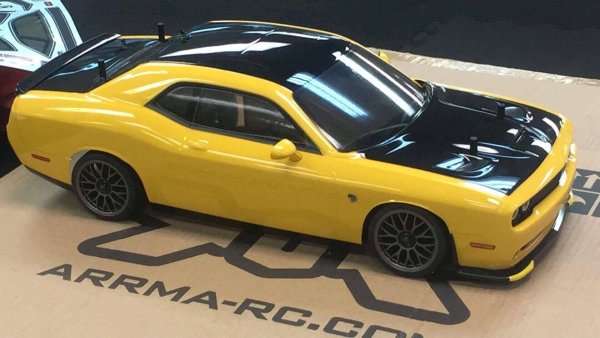 A group of Dodge Hellcat owners recently surprised a fellow member of the Mopar community with a radio controlled replica of his custom Dodge Challenger SRT Hellcat as a thanks for his ongoing service to the country as a member of the US Air Force – and the cool RC car arrived just in time for Christmas.
Advertisement

While I am not a Hellcat owner, I am fortunate to be involved in the online Hellcat owners community and in that group is a Dodge Challenger SRT Hellcat owner named Jason (we won’t be using his last name for security reasons). In addition to owning a wicked, customized Hellcat Challenger, Jason has a wife and three kids, but as we approach Christmas, Jason isn’t at home with his family. Instead, Jason is overseas, serving in the United States Air Force, and with the holidays upon us, a handful of members of the Hellcat community wanted to do something to thank him for his service.

Well, what do car guys do for a car guy buddy who is stationed halfway around the world- far away from his unmistakable Dodge Challenger SRT Hellcat?

You have a miniature version of that car made in exact detail.

A Gift for a Soldier and Friend
I spoke with Paul Powell, administrator of the Hellcat Group Facebook page and one of the guys who helped organize this surprise for Jason.

Jason was called up in October and deployed to the Middle East. Tom Schmidt and I were talking one night and we wanted to do something really nice for him as a thank you for all of his sacrifices for our country. Tom Schmidt came up with the idea to get a custom remote control car made that was identical to his customized Hellcat. I talked with another local mutual friend Dan Capotosto about joining our little group and once he was in, we talked with Ron Bosco at Cruisin' with Rc's about building this customized Hellcat. He gave us an estimate on the custom build and we thought that it would be awesome to get other people involved, so we spoke with a few other Hellcat owners who know Jason and who might want to be involved – adding Paul Georges, Mark Hughes, Paul Elkins, Paul Nickolas and Brandon Ryan to the group of Christmas conspirators.

I talked with Jason’s wife, Rochelle, about this project and made sure that we could send it to him in the Middle East and got the shipping address for him. Once that was done, I had to figure out one last thing. The tricky part was letting the idea go public without Jason finding out, considering that he is very active in the Hellcat community. I ended up creating another FB account and blocking him so I could post it publicly. It worked, he didn’t know anything about it in advance.

We ended up getting a wide range of support for this project and this gift. It still warms my heart to see all of the support we got for a member of our community. A special thanks goes to everyone who helped make this possible.

The Package has Arrived
While I spoke with Paul Powell about this surprise gift a few weeks ago, I have waited until Jason received the RC Hellcat Challenger before posting this piece – as I didn’t want to spoil the surprise. Jason recently posted on Facebook that he received the miniature version of his high performance Mopar muscle car and based on his reaction, I would say that he was surprised and touched by the gift from the community.

Mitch wrote on November 7, 2019 - 3:22am Permalink
Hey pal, you forgot to take your splitter guards off