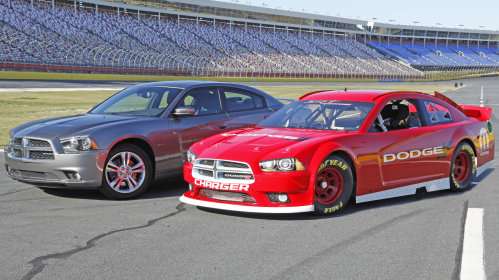 The hoards of faithful Dodge loving NASCAR fans around the country received some very bad news this week as SRT Motorsports President and Chief Executive Officer Ralph Gilles announced that Dodge would be pulling out of the NASCAR Nationwide and NASCAR Sprint Cup Series after the current 2012 racing season.
Advertisement

Sam Hornish Jr. has not won a race in the NASCAR Nationwide Series this season but he has been incredibly consistent in his #12 Wurth Dodge Challenger, finishing in the top 5 6 times and the top 10 13 times in 20 starts. Hornish is sitting in 4th place, just 34 points out of first place so he could definitely make a run for the 2012 championship. While Sprint Cup regular Brad Keselowski is not eligible for Nationwide Series points, he has started 20 races; winning 3, while grabbing 3 top 5s and 10 top 10s in his #22 Discount Tire Dodge Challenger. These two team Penske Racing Challengers have also seen success with other drivers making cameo appearances like former open wheeler Jacque Villeneuve.

Over in the NASCAR “bigs”, Brad Keselowski has had a great season in his #2 Miller Lite Dodge Charger – netting 3 wins, 7 top 5s and 11 top 10s – helping him to rise to the 7th spot in Sprint Cup Series 2012 standings after 21 races. Keselowski fought through some engine issues early in the season to put himself securely in position to make a run for the Sprint Cup 2012 championship. Keselowski’s Penske Racing teammate for 2012 started out as AJ Allmendinger in the #22 Shell/Pennzoil Charger but after being indefinitely suspended for violating NASCAR substance abuse rules, he has been fired from Penske. His Dodge Charger will be piloted by Sam Hornish Jr for the rest of the season but in light of the failed drug tests, it proved to be a bit of a “black eye” for the Dodge team. Robbie Gordon began the year in the self-owned #7 Speed Energy Charger but as has been the case throughout his entire racing career – Gordon was not competitive. He hasn’t been in a Sprint Cup race in months.

In addition to the success for Hornish in the Nationwide Series and Keselowski in the Sprint Cup, SRT Motorsports unveiled a gorgeous new Dodge Charger stock car for the 2013 Sprint Cup Series season – unfortunately, that car will never see the green flag. Rumors had been floating around that there would not be any Dodge cars in NASCAR 2013 but Ralph Gilles announcement earlier this week (you can watch the video below) makes it official that the Dodge name will once again leave NASCAR.

“We’ve spent an intense five months working to identify and evaluate all options for our future involvement in NASCAR,” Gilles said. “A number of opportunities emerged, and our team worked diligently to put a structure together to fit our overall business and competitive objectives. While we have been pleased and enthused with the amount of interest from teams and sponsors over that time, in the end, we simply couldn’t develop the right structure.”

The cause for Dodge pulling out of the two major NASCAR leagues is the lack of a major team looking to run Dodge products in 2013. Penske Racing announced earlier this year that they would be shifting their two teams in the Nationwide Series and their two teams in the Sprint Cup Series over to Ford Fusions. Once Penske leaves, there will be no teams that are fully self sufficient to run Dodge Charger or Dodge Challenger “stock cars” so with that problem looming – the Chrysler Group has decided to pull the plug on their factory backed NASCAR program.

In addition to losing Penske Racing, there are a few other issues that likely weighed on the Chrysler Group’s decision to leave NASCAR. In order to support a successful factory backed racing program, the company has to pick and choose which types of racing are the best for the company and when you look at the state of the NASCAR program relative to other factory backed racing programs, the future looks to be brighter for Dodge fans in other areas of racing.

While NASCAR was once by far the most popular motorsport in the US, the predominantly circle track leagues have seen a steady decline in both television viewership and in-person attendance. NASCAR has made moves to help bolster the popularity of their sport such as allowing more unique vehicles that actually look like the cars that they are supposed to represent but thus far – results have been minimal. Combine that with the growing popularity of other types of auto racing like the American LeMans Series, off-road truck racing and the rapidly-growing world of rally cross and there is less of a question as to why SRT Motorsports will pull out of NASCAR after 2012.

The best venues for Dodge, SRT, and Mopar race fans to cheer on their favorite vehicles now rests with the American LeMans Series, the Torc Off-Road Truck Racing Series (particularly the Pro Rear Wheel Drive class) and the Global RallyCross Championship. The Ram/Mopar teams have long dominated the Pro RWD class of the Torc Off-Road truck racing series and they continue to do so in 2012. Travis Pastrana got off to a slow start in his 2013 Dodge Dart Rally car in the Global RallyCross world but after winning the last race for the short 2012 series – Pastrana and the Red Bull Racing Dodge Dart could be a major challenger for the 2013 Global RallyCross championship. Last but certainly not least is the return of the Viper to the American LeMans Series. While the two teams have a rough go of things in their first outing last week, we can only expect to see the #91 and #93 Vipers improve as they prepare to run a full season in 2013.

The announcement that Dodge will be leaving the NASCAR Sprint Cup and Nationwide Series after 2013 does come as a huge surprise but to a faithful Dodge fan, it is disappointing to see the company leave the popular racing leagues. The Dodge brand was a heavy hitter in the 1960s and 1970s thanks to Richard Petty but the Dodge name first left NASCAR in 1977 when tightening restrictions made their cars less competitive. Dodge returned in 2001 with an incredible amount of fanfare and while enthusiasm hasn’t waned with Dodge NASCAR fans, the lack of factory money has undoubtedly played a major part in the lack of interested teams for 2013. When it comes down to it, Dodge and SRT has proven to be more successful in other areas so racing money is better spent elsewhere. There is really no point for Dodge, SRT and the Chrysler Group to continue pouring money into NASCAR once they do not have a strong team running their cars and privateers like Robbie Gordon simply aren’t worth the company’s time and money. Harsh – but true.

That being said, as a proud Dodge fan I look forward to seeing Travis Pastrana and his Dodge Dart whoop up on the Global RallyCross competition through the end of 2012 and beyond.