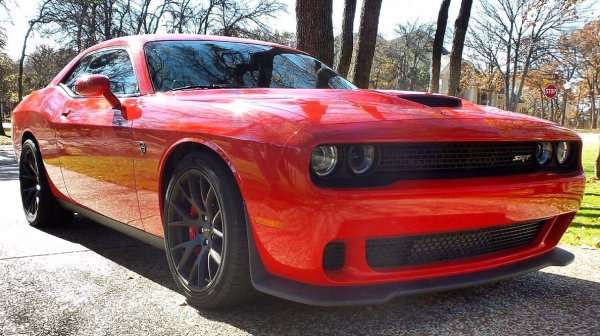 Dodge Hellcat Challenger with the Manual Trans Hits 60 in 1st, Too

After doing a piece earlier this week about the new Camaro ZL1 being able to get to 60mph in first gear with the manual transmission, a handful of Dodge Challenger SRT Hellcat owners contacted me to point out that their manual transmission muscle cars will do the same – and they can do it in about 4 seconds flat.
Advertisement

During last week’s Camaro 50th Anniversary celebration leading up to the Woodward Dream Cruise, chief engineer Al Oppenheiser stated that the 2017 Chevrolet Camaro ZL1 with the 6-speed manual transmission will be able to get to 60 miles per hour in first gear. In other words, while making a 0-60 sprint, Camaro ZL1 owners with the third pedal will not have to shift – leading to improved 0-60 times. Click here to read more about that.

Upon hearing that, I did an article on Monday about the interesting feat, but shortly after that piece went live, I received messages from Dodge Challenger SRT Hellcat owners who pointed out that the Camaro wasn’t the only muscle car that could hit 60 in first – as the manually shifted Hellcat Challenger will get to 60 without a shift as well.

Hellcat Challenger 6-Speed Gets to 60 in 1st
The first person to contact me about the Dodge Challenger SRT Hellcat’s ability to get to 60mph in first gear was Nick Russell, who owns the gorgeous red muscle car at the top of the page. His supercharged Dodge features the 6-speed manual transmission and in stock form, his car will get to 60 in first gear. In fact, it would get to 61 in stock form and now that he has had the car tuned, it will get to 63 miles per hour in first gear. After speaking with Russell, a few other manual Hellcat Challenger owners reached out to state the same thing and from there, the idea for this piece was born.

After confirming that the Hellcat Challenger with the manual transmission will hit 60mph in first gear, I wanted to find out how quickly one of the brawny supercharged muscle cars with the third pedal will get to 60 from a stop.

I was right, as Sipple recalled that when his record-setting Hellcat Challenger was stock, he was able to get from 0-60 in the low 4-second range regularly, with his best times being 4 seconds flat. It should also be noted that when Sipple’s car with in record-setting form with the sticky tires and some extra horsepower, he was able to get to 60 in just 2.9 seconds. 0-60mph in a 4,400lb, rear wheel drive American muscle car with a 6-speed manual transmission. Click here for more on Jon Sipple's Hellcat record run.

While Jon Sipple’s 0-60 time of 4 seconds flat might not be typical, that is a mighty impressive capability for a car of this size with a manual transmission and stock tires – helped in part by the fact that you don’t need to shift the Hellcat Challenger to get to 60.

With this in mind, it seems reasonable that the 2017 Chevrolet Camaro ZL1 with the manual transmission could get into the 3-second range in a 0-60 dash. Figure that the ZL1 has similar torque levels, less horsepower and less weight, so if the driver can put the power to the ground efficiently, the 6th gen Camaro ZL1 with a manual trans could crack the 3-second barrier.