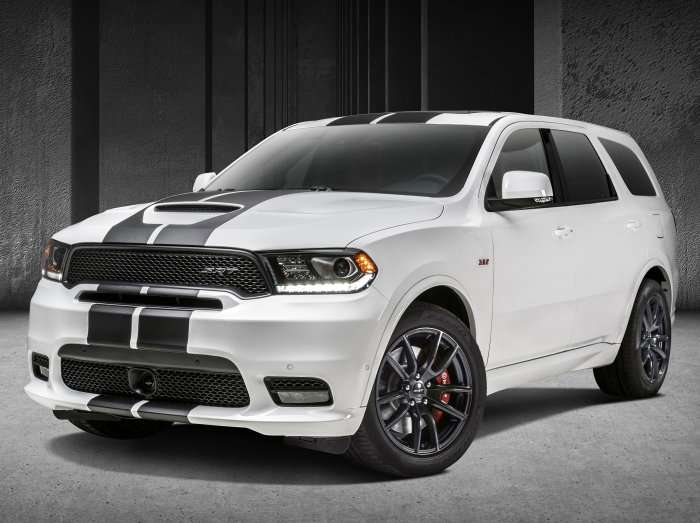 Dodge announced this morning that the 2018 Durango SRT will benefit from four sporty new options, including two that are available on R/T models as well and one that improves performance.
Advertisement

After years of Mopar fans pleading for an SRT version of the Durango similar to the SRT Jeep, the 485-horsepower Dodge SUV debuted in 2017 as a 2018 model year vehicle. While we don’t have hard sales numbers, plenty of Durango SRT models have been popping up in owner’s groups online, leading me to believe that this new high performance trim level is resonating well with buyers.

The early success of the Durango SRT combined with owner input has led FCA’s Mopar aftermarket performance division to roll out the first collection of upgrades for the 485hp Dodge SUV in the form of a suspension package and an exhaust system. In addition to those aftermarket items, the Dodge brand has announced two new ordering options – a dual stripe package and a revised SRT Interior Appearance Group package.

“Our Dodge//SRT performance enthusiasts are always looking for ways to make their vehicle their own,” said Steve Beahm, Head of Passenger Cars, Dodge//SRT, Chrysler and FIAT, FCA – North America. “The available stripes and carbon fiber throughout the interior really give Durango a custom look from the factory, and they are perfectly complemented by Mopar’s available exhaust systems and performance springs, which make Durango even more fun to drive.”

New Ordering Items
First up, anyone who heads to their local Dodge dealership in April to order a Durango in R/T or SRT trim will be able to order the new dual stripe package, similar to the design on the Hellcat cars. These stripes add $1,195 to the bottom line and they are available in five colors - Bright Blue, Flame Red, Gunmetal Low Gloss, Low Gloss Black and Sterling Silver.

Also, starting late this month, the 2018 Dodge Durango SRT can be ordered with a revised SRT Interior Appearance Group, coming with the upgrades of the original package (premium leather-wrapped dash, premium headliner material, unique trim paint) while adding carbon fiber trim on the dash and door panels. This package now costs $2,495, up from $1,500 in the current ordering system.

Mopar Performance Upgrades
More importantly than the new dress-up bits are the new Mopar accessories for the 2018 Dodge Durango, including a suspension upgrade for the SRT models and a performance exhaust system for R/T and SRT models.

The Mopar Durango Performance Exhaust adds sound and flow, although there is no mention on power upgrades with that added exhaust flow. The system is made from 304 stainless steel with 4-inch polished tips, so it will look great and sound great. For the R/T, this system is available now and it has an MSRP of $1,595 while the SRT system will be available later this year, with an MSRP of $1,850.

Finally, the 2018 Dodge Durango SRT can now be upgraded with a Mopar performance spring kit. The new springs lower the SUV by 15mm or just over a half inch, giving the high-powered SUV a more menacing stance and improved cornering capabilities. This package will be available next month and it will carry an MSRP of just $325.

Please, let us know what you think about the 2018 Dodge Durango in the comments section below.

Tammie Hetrick wrote on February 8, 2018 - 10:16pm Permalink
I test drove a SRT Durango a few days ago and was impressed. I’m going to order one in April and am excited to hear about performance exhaust. My Summer car is a Challenger Hellcat, so I was really looking forward to a Winter driver in AWD with a little beast under the hood! Way to go Dodge. Mopar or no car!