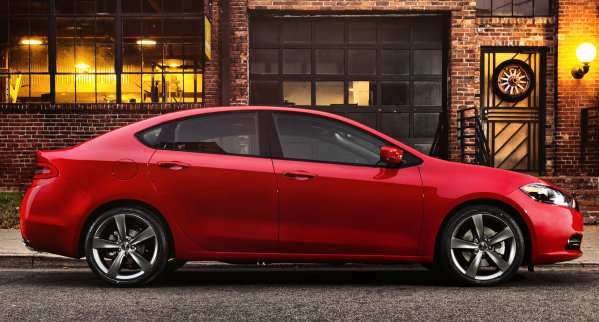 The Chrysler Group has announced that the 2014 Dodge Dart will have several models featuring the performance tuned engine from the 2013 Dart GT - bringing improved performance to the majority of the packages for the new model year.
Advertisement

One of the complaints about the 2013 Dodge Dart from many of the critics was that the standard 2.0L Tigershark engine was a bit underpowered for the roomy compact sport sedan. The Dart in SE, SXT, Rallye and Limited trim all came with the 2.0L engine standard with the optional 1.4L turbocharged motor offering better fuel economy and more power in all of those models. The only models that did not come with the 2.0L engine as standard equipment were the Dart Aero (1.4L turbo is standard) and the Dart GT – which comes with the 2.4L Tigershark mill. The 2.4L Tigershark is the most powerful of the available engines and for 2014, the Dart SXT and Limited join the GT in calling upon the 2.4L engine as standard equipment. The 2014 Dart SE will continue to use the 2.0L engine as standard equipment while the Dart Aero continues to use the 1.4L turbo motor. The Dart Rallye has been discontinued as a trimline and instead is now an option package on select models.

Surprisingly, the engine options listed about for the 2014 Dodge Dart are the only options – as each trimline will be offered with only one engine so if you want the 1.4L turbo motor (which I regard as being the best of the group), you will have to buy a Dart Aero. This means that the Dart SXT, Limited and GT will all offer 184 horsepower and 171lb-ft of torque and if the 2014 model year follows the 2013 model year in terms of transmission options – we can expect to see both a manual and dual clutch option…at least for some models.

The downside to the move to make the 2.4L Tigershark for the 2014 Dodge Dart is that this larger engine – while being quite a bit more powerful – is also quite a bit less efficient. Where the 2.0L engine offers 25 around town and 36 on the highway with a manual transmission, the 2.4L mill offers just 23 around town and 33 on the open road. On the other hand, the optional (for 2013) 1.4L turbocharged mill offers around 40 miles per gallon on the highway in non-Aero packages and 41mpg on the Dart Aero.
The other downside to the bigger, more powerful standard engine in the 2014 Dodge Dart is an increase in price across those trimlines now standard with the 2.4L 4-cylinder engine. With the Dart SE going unchanged for 2014, the price remains at $15,995. The Dart SXT which costs $17,995 for the 2013 model year with the 2.0L engine will cost $18,495 for 2014 but $500 isn’t all that much of a price hike for the top of the line engine becoming standard. Plus, the Dart SXT also gets standard race track taillights and some other standard goodies for the new year.

The Dart Aero now costs $19,995 (up $600) even though it hasn’t received any major changes while the Dart Limited gets the biggest price increase for 2014 – up to $22,995 from the $19,995 Limited base price for 2013. Fortunately, the 2014 Dart Limited also gets more standard features to justify that price hike like an automatic transmission, the race track taillight, heated Nappa leather seats and a ton of high tech goodies.

It will be interesting to see how these changes for the 2014 Dodge Dart pricing impact the sales sheet. Ive driven every trimline of the Dart and Im shocked that the 1.4L MultiAir turbo motor is no longer offered as that super efficient engine also provided plenty of power for this roomy compact sedan. The new standard 2.4L engine offers more power but quite a bit less fuel economy but in the long run – that could lead many prospective buyers to go with the 2014 Dart Aero.