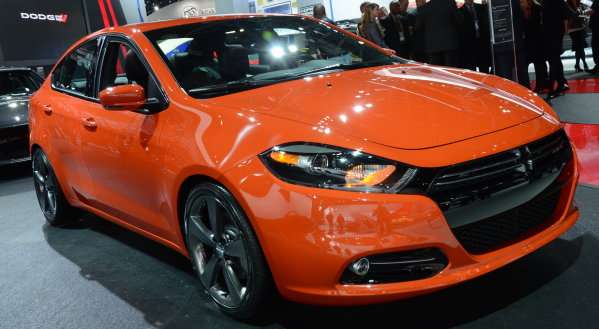 Dodge Dart, Chrysler 200 Could Live On with New Production Facilities

A few weeks back we discussed the report that the Dodge Dart and Chrysler 200 would come to an end after the current generation, but a new report suggests that both of these cars could live on into the future – except they could be built by a 3rd party rather than being built at Chrysler production facilities.
Advertisement

Back in January, Chrysler Group boss Sergio Marchionne suggested that the Dodge Dart and Chrysler 200 would eventually leave the lineup as the company focuses more heavily on their popular trucks, SUVs, minivans and large cars. With midsized and compact cars being the most popular in the US, it seems unlikely that the Chrysler brands would just leave those segments altogether and based on a new report from Motor Trend, it looks like the company could still be looking into the future of their smaller cars.

Sergio Talks Partners
Motor Trend spoke with Marchionne at the Geneva Motor Show and learned that the company is currently in talks with “partners” who could build the Dodge Dart and/or the Chrysler 200 for the Chrysler Group. There were no details as to who these partners might be, but the CEO made it clear that they don’t want to produce their own small cars.

So, why did Sergio talk about letting the Dart and 200 die off, only to now state that they want to find someone else to build the cars for them?

Fixing the Small Car Problem
The problem with these two small cars is that they don’t sell particularly well and due to their low price points, they aren’t big profit margin vehicles. So, they don’t sell very many and they don’t make much money on the units that they do sell. On the other hand, a vehicle like any of the hot-selling Jeeps sells in far greater numbers and, due to the higher price points, the Jeeps have a much bigger profit margin.

Now, if Dodge was selling 20,000 Darts a month or Chrysler was moving 20,000 200s a month, that small profit margin wouldn’t be as big of an issue, but the combination of lackluster sales and a small profit margin makes these sedans less appealing to the company. Fortunately, that problem could be fixed by improving sales or improving profit margins, and while it is very hard to increase sales significantly without dropping the price, the company could increase profit margins by reducing their costs. One way place that they can reduce their costs is in the manufacturing process.

Basically, if Chrysler can find another automaker who has “room” in a production facility to build the Dodge Dart and the Chrysler 200, it will likely cost them less in the long run than building the cars themselves. Consider that the Chrysler 200 is the only vehicle built at the Sterling Height plant, so every cent of expense incurred at that plant cuts into the profit margin of those cars. On the other hand, the Dodge Challenger, Dodge Charger and Chrysler 300 are all built in the Brampton plant, so the facility expenses are split among those vehicles – having less impact on each in the process.

Consolidation in Sterling Heights
What I find the most surprising about this whole issue is that in ending internal production of the Chrysler 200, the company won’t have a purpose for the Sterling Heights plant. The company invested some $850 million dollars in the facility just a few years back to build a massive new paint area, so it seems to me that the company would want to find a way to make better use of that facility rather than just farming out production.

In any case, Sergio Marchionne’s comments in Geneva make it look like the Dodge Dart and the Chrysler 200 both have a future – but they are probably going to be built by someone other than Chrysler. The company worked with Mazda on the new Fiat 124 Spyder and they have worked extensively with Mitsubishi in the past, so either of those companies could turn out to be the partner in question.

John in Michigan wrote on March 31, 2016 - 11:46am Permalink
Sergio wants Americans who want small cars to buy Fiat, not Dodge. I have a 2013 Dart Aero 1.4T with a manual transmission, and it is a decent car that gets 40 mpg. It is not a car that everyone would want, but it works for me. I considered Fiat which has the same engine, but they are too small,cheap and junky, and are built in Mexico. Stay away from Fiat.
mike wrote on April 21, 2016 - 4:41am Permalink
I also own a 2013 Dart but I have the 2.0L and I purchased it new in 2013. I have a long commute to work everyday (100 miles one way) so I have racked up the mileage quickly. My car has 118,000 miles on it and I just replaced the rear wheel bearings about 1,000 miles ago. I still have the original brakes. The only other thing that I have changed was the tires (oil and filter every 5,000 miles). This car has been perfect. I set my cruise at 75 mph and I get 35-37mpg. I cannot believe that they would even consider not making this vehicle.
Hugo wrote on May 2, 2016 - 8:20pm Permalink
I own a 200 and think it is a great car.The problem is with the reviewers.I get 35 mpg at 80 mph with my 2.4 .
Johnny wrote on June 22, 2016 - 2:40pm Permalink
I loved my '69 Dart. I had it for fourteen years, and put over 200K miles on it, before I sold it. I have always felt that today's Dodge Dart looks a lot like the 2004 series Mazda3 sedan, a very boring auto, I also owned. That's why I didn't buy a new Dart. Maybe Mazda will end up building the Darts of the future, and make them a little more exciting.
Jack wrote on August 31, 2016 - 9:43am Permalink
We own a 2009 Chrysler Sebring Convertible, and 2- 2012 Chrysler 200s . I change the oil (very user friendly) and rotate the tires. All these cars run perfectly. The 200s get a 35-36 mpg highway. They are a comfortable and affordable vehicle that auto reviewers seem to dislike.