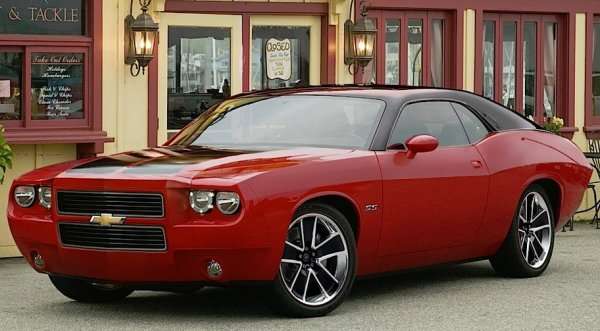 There are pictures and fake stories going around the internet insisting that a new Chevrolet Chevelle, Ford Torino GT and Dodge Coronet Super Bee are coming for the 2016 model year, but not only are they not happening for 2016 – they aren’t going to happen anytime in the foreseeable future.
Advertisement

In the past few years, several “automotive news sites” who post tons of unsubstantiated rumors and low quality Photoshop work as fact have benefitted from the viral nature of Facebook. Posts about a 2016 Dodge Coronet Super Bee, a 2016 Chevrolet Chevelle and a 2016 Ford Torino GT have appeared on these questionable websites and since they include tons of made up information, many people believe the trash posted on those sites to be true.

However, in an effort to stop the spread of this automotive misinformation, I wanted to put together a piece debunking the rumors of the Dodge Coronet, the Chevrolet Chevelle and the Ford Torino – along with some simple facts that prove that these rumors are 100% junk.

Too Late for a New 2016 Anything
First of all, many of these rumors and fake reports suggest that the new Chevy Chevelle, Ford Torino GT and Dodge Coronet Super Bee are coming for the 2016 model year. We are currently in the second half of the 2015 calendar year and if the company was going to introduce an all-new model, they would have done so already. Consider the fact that the 6th gen Camaro, which will debut for 2016, was introduced very late and that was last month.

If any of the Detroit automakers were rolling out a new muscle car for the 2016 model year, they would have at least spoken about it at this point, but it just isn’t going to happen…not because of the timing, but because there is no room for another muscle car in the Chevy, Dodge or Ford lineups.

No More Conflicting Muscle Cars
Back in the 1960s and 1970s, Ford, Chevy and Dodge all had a handful of cars that offered very similar features and capabilities, but while that worked back in 1970, it won’t work in the modern auto industry. General Motors’ muscle car is the Camaro and introducing a new Chevelle would be little more than restyled competition for the Camaro, whereas back in the 1970s, the Chevelle, Malibu, Camaro and other coupes all coexisted in an industry which allowed those practices.

Look at Ford Motor Company, who gradually killed off their 2-door rear wheel drive sport models (read: Thunderbird, Cougar) to clear room for the Ford Mustang. Introducing a new Torino GT would compete with the Mustang, even if it had a touch more interior space.

Finally, just like Dodge won’t introduce a 2-door Charger while the Challenger exists, the company certainly isn’t going to introduce another similarly sized 2-door performance car – especially with the Coronet name. Just like Ford and GM, Dodge just isn’t going to have more than one 2-door muscle car in their lineup, as the modern industry dictates that companies remove redundancies in their lineup rather than introduce new models to trip over each other.

Images, Information is All Fake
Some of the people spreading this false information online are doing so simply because these fake reports are so well done. They have detailed information and they even have images, one of which we have included above showing the alleged 2016 Chevrolet Chevelle. If you look closely at the Chevelle, covering the areas ahead of the front wheels and behind the rear wheels, you will see the center of a black and red Dodge Challenger. The wheels are from the Hurst Special Edition Challengers and the headlights on the fake Chevelle are from the 2006 Dodge Challenger Concept.

While the idea of multiple muscle cars in each of the Detroit automakers’ arsenals is a pleasant idea, it is never going to happen in the modern auto industry. Remember folks, if a piece seems too good to be true, it probably is. The Dodge Coronet rumor insists that it will cost $31,000 and have a Hellcat Hemi, which should throw up red flags right away, but even if the piece stated that it came with a Pentastar V6 – it isn’t going to happen anytime soon.

Fortunately, the Chevrolet Camaro, Ford Mustang and Dodge Challenger are all incredible performance cars so there is no real need for inner-brand competition.

Original Image Source Unknown. If the artist wants to take credit, shoot us an email and we will give proper credit.

Jack Arnold wrote on August 19, 2015 - 8:01pm Permalink
It looks like a Challenger with a chevy front end! I bought a new 68 Chevelle SS 396 ,69 Camaro SS Rally Sport 396 and several Corvettes last one a 2012. It's too Dodge!!
John wrote on May 9, 2016 - 11:10pm Permalink
One company having multiple cars will still work what abou the malibu and impala their practicaly the same. I see no difference between now and then except for styles and if you cant see that your life must suck.
Phillipe wrote on August 15, 2016 - 7:32pm Permalink
Why does Chevy insist on putting that ugly huge gold Chevy emblem on the front of every car? Oh and another thing, it isn't a bowtie. It's not even close to being a bowtie.

Elon Makes a Cybertruck Statement With an Action, But Quiet in Words
Tesla's Record Month in China: Doubled Registrations in March 2021
END_OF_DOCUMENT_TOKEN_TO_BE_REPLACED