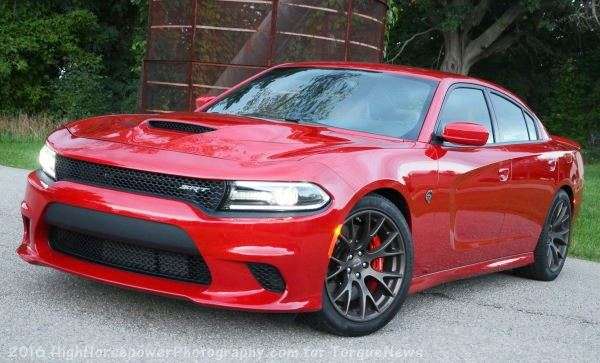 While the Charger was the less popular of the Dodge Hellcat cars for the second year in a row, there more than three times as many Hellcat Chargers built for 2016 than were built for the previous model year – with more than 4,000 examples of the 707 horsepower super sedan offered up to dealerships around the country.
Advertisement

As was the case with the Hellcat Challenger production numbers we discussed previously, these Dodge Charger SRT Hellcat production numbers are not official figures from FCA. These numbers come from the website Hellcat.org, which has proven to be a reliable source of inside information in the past, so while these aren’t official numbers – they are likely as close as we are going to get to official. The understanding with this information is that it is acquired from someone inside the company who obviously opts to remain nameless.

In short, until FCA offers up their own, official numbers, these are the best numbers that we have in terms of Hellcat Charger production and according to the inside from Hellcat.org, there were three times as many examples of the supercharger, 707 horsepower sedan for 2016.

2016 Hellcat Charger Production Totals
According to the charts at Hellcat.org, FCA built 4,025 examples of the 2016 Dodge Charger SRT Hellcat – all of which had the 8-speed automatic transmission. For the 2015 model year, Dodge built just 1,334 Hellcat sedans, so production of the 707 horsepower Dodge with four doors improved by 302% during the 2016 model year.

For the second year in a row, a black exterior color was the most popular among the 2016 Hellcat Charger, but where Phantom Black was the most popular color in 2015, Pitch Black was the most popular option for the blown sedan in 2016. With 1,151 Hellcat Chargers being Pitch Black, that single color accounted for roughly 29% of the 2016 production run of the supercharged sedan. Bright White was second with 596 units (15%) and Granite Crystal was third with 358 units (9%). The first “high impact” color was Redline Red in fourth with 336 units built (8%), followed by Ivory Tri Coat in fifth with 301 units (7.5%). Some of my favorite colors, including Go Mango, Plum Crazy, TorRed and B5 Blue ranked in the bottom half of the color list, while Billet Silver, Jazz Blue and Maximum Steel were the least popular colors for the 2016 Hellcat Charger.

The biggest surprise to me is that Plum Crazy was only applied to 255 examples of the 2016 Hellcat Charger, accounting for just 6% of production. I am very active in the online Hellcat community and it seems that many people bought Plum Crazy, but while that stunning purple was the second most popular for the Challenger, it ranked seventh for the Charger.

Finally, while the Hellcat.org forum posting has a ton of charts with the different breakdowns for all sorts of options, some key charts include one for sunroofs, the black painted roof and the carbon fiber stripes. Thanks to this, we know that 37% of 2016 Hellcat Chargers had a sunroof, 12% had the black painted roof and 16% had the carbon fiber stripes.

The website also has a breakdown of Hellcat Charger production distribution for the 2016 model year in both the US and Canada, along with a look at many other charts detailing the production numbers of the 2016 Challenger and Charger.

The bottom line is that in 2016, Dodge built more than three times as many Hellcat Chargers as they did in 2015 – and that is the kind of automotive trend that I can appreciate. Also, provided that these production numbers are accurate, Dodge has now built 5,359 Hellcat Chargers over the first two model years, joining the 19,163 Hellcat Challengers for a total of 24,522 Hellcat Hemi-powered muscle cars built.

Click here for a closer look at the 2016 Hellcat Challenger production numbers.