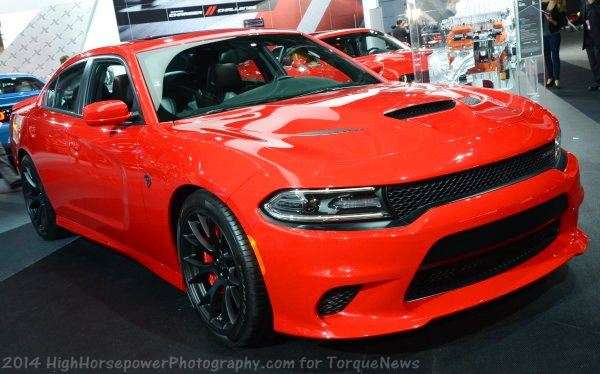 Production of the 2015 Dodge Charger SRT Hellcat has begun at Chrysler’s Brampton Assembly Plant and after the smash success of the Hellcat powered Dodge Challenger starting last year, it should come as no surprise that the first allocation for the world’s most powerful sedan is seemingly sold out.
Advertisement

First off, the good news – the 2015 Dodge Charger SRT Hellcat has officially reached the production phase so very soon, the world’s most powerful and fastest 4-door sedan will be reaching dealerships and lucky new owners around the United States. The rollout will likely be a cautious one, as the quality control process for the first batch of 707hp Charger sedans is likely to be an extensive one, but those who have been eagerly awaiting the arrival of their Mopar super sedan – your wait is almost over.
The bad news is that the same Allpar report that announced the start of Hellcat Production also announced that the first batch of 707hp Charger sedans are sold out.

How is the Hellcat Charger Sold Out?
We reported a few months back that like the 2015 Dodge Challenger SRT Hellcat, the 2015 Dodge Charger SRT Hellcat would not be built in limited numbers. Early reports suggested erroneously that production of each of the 707hp Mopar muscle cars would be limited to 1,200 or 1,500 units, but multiple Chrysler Group executives and representatives have made it very clear that there was no production limit on either of the Hellcat Hemi powered Dodge cars.

So, if there is no production limit, how is the 2015 Dodge Charger SRT Hellcat sold out already?

While there is no production limit on the number of 2015 Dodge Charger SRT Hellcats that the Chrysler Group would build, there is a limit on how many superchargers supplier IHI can provide each month. The Brampton plant can build cars at a far higher rate than IHI can build Hellcat superchargers, and that is why the term “sold out” is being used here. Technically, you can still go to your local dealership and order a 2015 Dodge Charger SRT Hellcat, but at this point, it will not be coming from the first production run or as part of the first phase of allocation.

In other words, the Hellcat Charger isn’t totally sold out because there is no cap being imposed on production, but right now, all of the Hellcat superchargers on hand are spoken for via orders previously placed.

You Can Still Buy a Hellcat Charger Now
The good news for those folks who want to buy a 2015 Dodge Charger SRT Hellcat, but who did not preorder one, is that there is a good chance that with some careful shopping, you will be able to find a 707hp Charger to buy fairly soon. The first batch of Hellcat Chargers are technically sold out, but that only means that the cars being built are spoken for by a dealership. In some cases, those cars have actually been ordered and partially paid for by a prospective owner, but there are most certainly some of the Charger Hellcat sedans that have been ordered for dealership stock.

That means that more than a few of the first group of 2015 Charger Hellcat sedans will be available for sale at dealerships around the country so while you cannot order a car from the first phase of allocation to dealers – you can still throw down a fat check and drive away in a 707hp Dodge Charger.