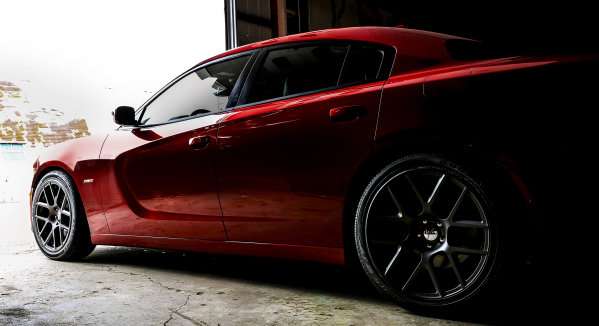 Dodge Charger Hellcat Could Be Faster Than the Challenger Hellcat

The Dodge Charger SRT Hellcat is all but official at this point and when the 707 horsepower 4-door sedan arrives later this year, it will offer at least the same level of performance as the Hellcat Challenger and depending on how the Chrysler Group equips the supercharged Charger - there is chance that the Charger could offer up some better figures.
Advertisement

The Dodge Charger and Dodge Challenger are based on the same chassis platform so when the 4-door version of the 707hp Mopar muscle car arrives later this year, it will offer very similar performance to the slightly smaller Challenger. However, when looking through the various weight ratings for the 2014 and 2015 Challenger along with the numbers for the 2014 Charger, it looks like there is a chance that the Charger could be faster of the two blown Dodge models with an equipment package that draws inspiration from the current SRT8 Super Bee.

A Look at the Weight Numbers for the Charger and Challenger
We talked yesterday about the fact that the 2015 Dodge Challenger SRT Hellcat weighs 4,439 pounds when fitted with the 8-speed automatic transmission. I expect very much to see that same 8-speed transmission mated to the Hellcat Hemi in the SRT Charger since there has never been a manual transmission option for the modern Charger sedan – and I don’t expect Chrysler to start offering a manual transmission now.

The 2014 Dodge Charger SRT 392 weighs 4,364lbs, making it about 161lbs heavier than the comparable 2014 Challenger. If you add that 161lbs to the 2015 Hellcat Challenger, the 707hp Charger would (for the sake of discussion) weigh right around 4,600lbs. Mind you, the Hellcat Charger will have the same new looks as the 2015 Charger R/T that debuted earlier this year so there is a chance that the refreshed Charger could weigh less than the current models but it looks as though when everything else is equal – the Challenger will have a weight advantage over the Charger with the same supercharged drivetrain.

However, it should be noted that the 2014 Dodge Charger SRT8 Super Bee has a curb weight of only 3,961lbs – 403 pounds less than the non-Super Bee 2014 SRT Charger. If Dodge were to offer up a Hellcat Charger with a similar option configuration to the current Super Bee, which could allow them to cut up to 400lbs from the car, we are talking about a 707hp Hellcat Charger that weighs only 4,200lbs.

A 2015/2016 Dodge Charger SRT Hellcat Super Bee design could weigh around 140lbs less than the comparable 707hp Challenger…which could allow the big sedan to outrun the brawny Mopar muscle coupe.

The Charger Hellcat Size Could Be a Benefit
The 2015 (or 2016) Dodge Charger SRT Hellcat should come with the same 6.2L supercharged Hemi with 707 horsepower and 650lb-ft of torque, and that power will be sent to the wheels via a standard 8-speed heavy duty automatic transmission. The Charger will most likely be heavier than the Challenger (barring a SuperBee option), but that might not have a huge negative impact on performance. The Challenger SRT Hellcat has a worse power to weight ratio than the Mustang GT500, yet the Challenger ran almost a half second quicker in the quarter mile thanks to the improved traction through weight transfer and thanks to the lightning quick 8-speed automatic transmission.

The Hellcat Charger will benefit from the same aspects of the Challenger that make it so incredible so the big 4-door sedan should be able to make good use of all of that power on a good, hard launch. If the Charger Hellcat is only about 150-160lbs heavier than the Challenger Hellcat, there is a very real chance that the sedan will also be able to crack into the 10 second range with drag radial tires. There is also a very real chance that the Charger Hellcat will be able to lay down a quicker stock tire quarter mile time than the Mustang GT500 that offers owners an 11.6 quarter mile time. It is very unlikely that a Charger with the same drivetrain as the Hellcat Challenger will lose more than 3 tenths of a second and if the Charger can at least run an 11.5 – it will be faster than the fastest factory Mustang ever.

A 4-door Dodge Charger that will outrun the most powerful stock Ford Mustang ever in the quarter mile.

Also, the added size and weight of the Hellcat Charger could make it more stable at high speeds while the lower nose could offer better aerodynamics than the Challenger - possibly allowing the Charger Hellcat to break the 200mph barrier.

Nevermind other sedans – the Dodge Charger SRT Hellcat should be able to beat pretty much anything from GM or Ford in a straight line and that would be a mighty impressive claim.

Tom Williams wrote on August 5, 2014 - 1:32pm Permalink
Patrick--I think it's unlikely there will be a lightweight version of the Charger Hellcat. There is currently a stripped (and lighter weight) version of the Challenger called the "SRT8 Core" (the analogue to the Charger Super Bee); but it doesn't appear that Dodge will be offering that model with the Hellcat package. All of the videos and blogs have indicated that the Challenger Hellcat will be fully loaded. I suspect the same will be true for the Charger.
Patrick Rall wrote on August 6, 2014 - 12:48am Permalink
This was true of the earlier SRT8 Chargers as well...and then they came out with the lighter Super Bee. I dont think that we will see a lightened up Charger (or Challenger, for that matter) with the Hellcat any time soon, but I believe that we will see a more performance focused Hellcat lineup with less "goodies" in the future.
Larry J. Engel wrote on August 5, 2014 - 6:47pm Permalink
The Dodge Pavilion at the Woodward Dream Cruise ought to be Center Stage this year- Hopefully a lot of questions will be answered by then-good stuff!
Ray wrote on August 5, 2014 - 7:32pm Permalink
One key thing. The SRT Charger Super Bee does not have adaptive suspension which is why it weighs significantly less than it's SRT Charger counterpart. The H/C supercharger setup for the Charger will add roughly 188 lbs to the SRT Charger with adaptive suspension. It will likely weigh in around 4500lbs. If anything, you'll see the 392 go in to a Charger R/T similar how they did the Scat Pack for the Challenger.
Alan wrote on August 5, 2014 - 8:48pm Permalink
Base weight for the charger supeebee is 4271lbs. The standard srt8 is 4358lbs They didn't cut 400lbs off.
Patrick Rall wrote on August 6, 2014 - 12:48am Permalink
Are you completely sure on this, Alan? I found several sources when researching this piece (non of them official from Dodge) which listed a sub-4,000lb curb weight.
Cliff wrote on August 6, 2014 - 6:44am Permalink
I believe Alan is correct, the weight difference between the SB and SRT is 100 lbs or so. To drop 400 lbs would require extensive use of aluminum, high strength steel and or carbon fiber. That would also put it very close to the weight of a Camaro.