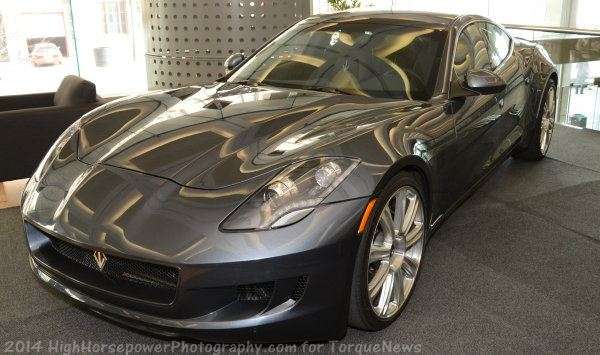 The Dodge Charger SRT Hellcat is currently the most powerful, the quickest and the fastest 4-door sedan in the world, but the 707hp Mopar beast could soon have some stiff competition from a GM-powered 4-door, but it isn’t the Chevrolet SS – it is the Fisker Karma.
Advertisement

The 2015 Dodge Charger SRT Hellcat is the most powerful sedan in the world with a supercharged 6.2L Hemi making 707hp. The Fisker Karma is an extended range electric luxury car with a 2.0L General Motors 4-cylinder engine providing the juice for the electric motors to offer 201 horsepower. It is hard to imagine that the Karma could be taken seriously in a discussion comparing it to the 707hp Charger Hellcat, but thanks to Bob Lutz and the people at VL Automotive, the car that we first knew as the Fisker Karma could become a true rival to the Charger under the name VL Destino.

The VL Destino Super Sedan
If you are a regular TorqueNews reader, you likely recognize the VL Destino. This is a heavily modified version of the Fisker Karma, customized by the folks at VL Automotive – a company which former GM CEO Bob Lutz has joined. The Destino has been shown off at the Detroit Auto Show and basically, VL Automotive takes a Fisker Karma, removes all of the electric drivetrain bits to clear the way for a proper V8 engine and the buyer’s choice of a 6-speed manual or automatic transmission. The V8 engine that has been fitted into the show cars in Detroit was the LS9 V8 from the C6 Corvette ZR1, which offers 638 horsepower and 600lb-ft of torque in factory stock form.

Those power figures are well below those of the Hellcat Charger, but we have to keep in mind that as an electric vehicle, the Fisker Karma was designed with supreme aerodynamics for the best battery range possible. One problem for the Karma was weight, tipping the scales at 5,300lbs. However, when you replace the heavy electric drivetrain components with a traditional engine and transmission combination, over a thousand pounds is shaved from the VL Destino, making for a 4,200lb sedan with 638hp. The Hellcat Charger weighs around 4,500lbs and has 707hp so while the Dodge would still have an advantage in power, the Destino should weigh at least a couple hundred pounds less than the Charger.

Click here for a look at our first drive review of the incredible 2015 Dodge Charger SRT Hellcat sedan.

Lutz Eyes a Top Speed of 200+
While speaking with Fortune magazine, Bob Lutz proclaimed that the VL Destino would be among the fastest sedans in the world, but in the video that you can watch below, he expects that it will actually be the fastest 4-door sedan in the world. To be the fastest, the Destino will have to beat the fastest and right now, the fastest is the Hellcat Charger with a top speed of 204 miles per hour. The Fisker Karma exterior design should certainly help reach those speeds, but you have to wonder if this sedan that was meant to go 125 miles per hour will be able to safely reach 205mph. Just because a car can go 205 miles per hour thanks to its aerodynamic properties, it doesn’t mean that you will be able to control the car at 205mph.

Still No Faster Production Sedan Than the Hellcat
The VL Destino could use the Corvette ZR1 drivetrain to make the Fisker Karma body the fastest sedan in the world, but it is still a far cry from a production vehicle. Now, if Fisker Automotive was to begin installing the LS9 engine into the cars and they met the minimum production requirements to be considered a production car, then yes. However, VL Automotive buying old Fisker Karma sedans, ripping out the boring electric drivetrain and installing a motor that the bought from General Motors does not translate to a production car. Should the VL Destino be able to hit 205mph, a tuning company like Hennessey will almost assuredly be able to get the Hellcat Charger to go a little faster with some simple modification of their own.

The biggest problem with the VL Destino is that the prices floating around the internet are in the range of $180,000. For that kind of money, it had better blow the Hellcat Charger – that is under $70,000 well equipped – in every imaginable way.