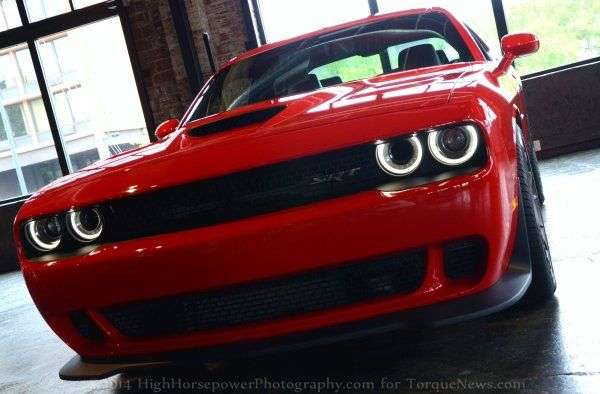 While we had initially expected that the 2015 Dodge Challenger SRT Hellcat would hit 200 miles per hour, word on the street is that the 707 horsepower Mopar muscle car will fall just short – with a top speed of 199 miles per hour.
Advertisement

The Chrysler Group hasn’t officially announced the top speed of the 2015 Dodge Challenger SRT Hellcat, but at the ongoing media launch Dodge CEO Tim Kuniskis stated that it would reach a top speed of 199 miles per hour. That is really the first piece of news pertaining to the new Hellcat Challenger that hasn’t set the world on fire, as that top speed falls short of the maximum capability of the 2014 Ford Shelby GT500 Mustang.

Hellcat is Quickest, but Not Fastest
The Chrysler Group has had the 2015 Dodge Challenger SRT Hellcat officially certified by the NHRA as being capable of running an 11.20 quarter mile with the stock tires and 10.85 with drag radials. At that point, Chrysler proclaimed that the Hellcat Challenger was the fastest muscle car ever…but that is a very debatable claim. The problem is that when people refer to a car as being fast, they are considering the top speed of the vehicles in the discussion. When it comes to drag racing, being the faster car is generally referred to as being quicker…not faster. Faster in the quarter mile, sure, but not the fastest overall.

The 2014 Ford Shelby GT500 Mustang “only” offers a stock quarter mile time of 11.6, but it is capable of hitting a top speed of 200 miles per hour. It should also be noted that some outlets have claimed to hit a 202mph top speed while others haven’t been able to hit 200. In any case, Ford claimed that the 2014 GT500 Mustang could hit 200 miles per hour and that is the number that is used in most discussions. The Hellcat Challenger is clearly quicker than the GT500 – with a significantly lower quarter mile time – but the GT500 could (in theory) still outrun the Hellcat Challenger given enough running room.

The Challenger Should be More Stable than the GT500 at 199
While the 2014 Ford Mustang Shelby GT500 has the seemingly official top speed advantage of 1-3 miles per hour depending on the source, the 2015 Dodge Challenger SRT Hellcat should be more stable and more comfortable at extremely high speeds for one very simple reason.

Since the first modern Dodge Challenger hit the road for the 2008 model year, it has been criticized for its relatively high curb weight. The Challenger weighs considerably more than the Mustang and significantly more than the Camaro. That has put the Challenger behind the 8-ball in the horsepower war and the company has always countered that by packing big power under the hood. With the 2015 Challenger, there hasn’t been any real weight reduction, but they have added a whole lot more power with the supercharged Hellcat and because of that – it will offer very comparable high speed capabilities to the lighter Mustang GT500. However, since the Challenger is bigger and heavier, it should offer a much more stable feel at the crazy high speeds. That same high curb weight is what is preventing the blown Challenger from breaking into the 200mph barrier, but it will ultimately make the Challenger a better, safer super muscle car.

200mph isn’t Far Away
Fortunately, those 205 Dodge Challenger SRT Hellcat owners who absolutely, positively must be able to go faster than the Ford Mustang Shelby GT500 won’t need to do very much work to reach that lofty level of performance. The nice thing with a supercharged engine is that there can be little adjustments made to squeeze out a little more power so some light performance mods should definitely allow the Hellcat to push the Challenger past the GT500.

While we dont have any videos of the Challenger SRT Hellcat making a run at 200mph, we do have some videos from the media launch showing the Challenger in action on the road course and quarter mile. You can find one of them below and expect a great many more over the next few days. Oh, and make sure to have your speakers cranked way up because this car sounds incredible.

Ryburn wrote on February 3, 2015 - 1:44pm Permalink
Actually, the thing holding the HC back from 200 MPH is drag. Weight is completely unimportant when discussing top speed, it's power to drag that matters for top speed, not power to weight. Power to weight is most critical factor for acceleration, not top speed.