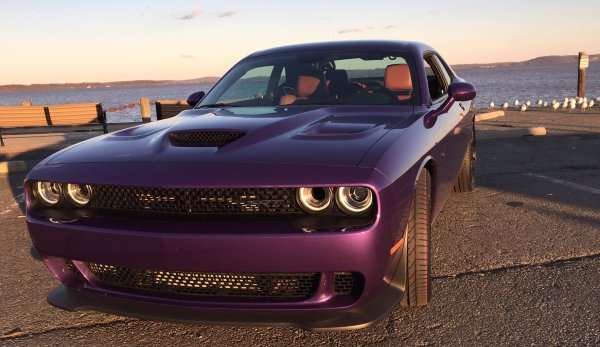 When the Dodge Challenger SRT Hellcat was introduced, it came with the quickest official quarter mile time of any stock muscle car – with NHRA certified figures of 11.20 with the stock tires and 10.80 with drag radials – but this past weekend, a Hellcat Challenger owner in Maryland ran a stunning 11.08 quarter mile with every factory components including the stock Pirelli tires.
Advertisement

We talk about a great many drag racing Hellcat cars here on TorqueNews, and while some of them have stock power, stock gears and other stock components, all of them have at least something that has been changed since they rolled off of the assembly line in Canada. In almost every case, the Hellcat Challengers and Chargers we feature at least have swapped to a stickier drag radial tire. The stock Pirelli tires are one of the key limiting factors in unleashing the full potential of the Dodge Hellcat cars, so most experienced racers switch to a better tire before hitting the track.

However, one Hellcat owner is looking to see just how quickly he can get his Dodge Challenger down the ¼ mile in full stock form – including the stock Pirelli tires. So far, he is doing a very good job, as he has made a handful of runs which were quicker than the official stock time of 11.2, including an 11.08 pass. To my knowledge, that 11.08 is the quickest fully stock Hellcat ¼ mile time, as I have been unable to locate any other Hellcat owners who have gone 11.0s or better with the stock tires.

Well, when Jay Gustafson went to the track for the first time back on October 26, he was able to lay down an 11.208 on his first ever pass down the track. On his second (and final) run that day, he had traction problems, but after his first trip to the track, Gustafson had been able to hit the official stock ¼ mile time on the stock tires. He returned to the track again on November 19th and, once again, the Cecil Country Dragway was so crowded that he only got to make two runs in his Hellcat Challenger, but he was able to chip away at his previous best time, running an 11.207. That is an impressive ¼ mile time for a car and driver combo that had only made four trips down the track, but when Jay and his Hellcat Challenger headed to the track this past weekend and found a very thin crowd – he had his chance to really get some quality seat time.

To be exact, Jay Gustafson made 14 passes this past Saturday in his Dodge Challenger SRT Hellcat and while doing so, he was able to work the car down into the 11.1 range – running a handful of 11.10-11.14 passes. Most importantly, during that stretch of 11.1 runs, the conditions were just right for Jay Gustafson to drive his Hellcat Challenger into the 11.0 range, running an 11.08 at 128.37 miles per hour. That was his best ET of the night and to my knowledge, that is the quickest ¼ mile ET for a fully stock Hellcat car to date. Also, Jay’s best trap speed of the night was actually a bit better on his 11.10 run, hitting 128.8 between the final beams.

Now, it should be noted that Jay Gustafson has spent plenty of time at the drag strip in the 80s and 90s, bracket racing in a handful of different Mopar muscle cars. He clearly knows how to get down the track, and when you put someone who knows how to drive in 55-degree air at a track that is well-known for being very fast – it is a recipe for a record.

So in summary, Jay Gustafson’s 2016 Dodge Challenger SRT Hellcat is 100% factory stock down to the tires and in addition to a handful of 11.1 runs, he laid down a best of 11.08 at Cecil County. That is 9 hundredths of a second away from being a 10-second car in 100% factory stock form.

Best of all, Jay Gustafson plans to hit the track again this weekend, so if he gets cooler air and the chance to make a handful of runs – we could very well see a fully stock Hellcat Challenger run a 10-second ¼ mile. Should he do that, he will be in a very exclusive class of stock 10-second cars which had previously been reserved for far more expensive supercars, but Jay Gustafson might roar into that group with his 4,500lb Mopar muscle car.

Don wrote on November 30, 2016 - 6:23pm Permalink
These times are only possible with negative DA weather/temps. A more realistic ET will be in July and no where near 11.08
Jay Gustafson wrote on December 5, 2016 - 7:04pm Permalink
Don, would you intentionally try for a record on a hot August day? Of course not. Just like I wouldn't try in the rain, I know well enough to wait for the right conditions. The other stock A8 Hellcats that were there on 11/26 were running 11.4's at 124-125mph, so I know my car is a little more powerful than most. Also, the cold weather that makes the engine run well also negatively affects the already limited traction of the Pirelli Pzero's. The temps were in the mid 40's and Pirelli recommends not even driving on these tires below 40 degrees or so. The car is bone stock, the only work done to it since it was built is one oil change about 1k miles ago. The tires haven't even been off the car yet. It's still under warranty. And to prove it wasn't a fluke (I ran a long string of 11.1's that night in addition to the .08) I also ran it again this past Saturday 12/3. Now it's the first purely stock Hellcat to run in the 10's (10.997 @128.87 with a 1.80 60ft time). I ran a long string of 11.0's and low 11.1's that day too, with one lucky launch being enough to push it into the 10's.. There's no need for sour grapes, it is what it is - a factory production 10 second street car.
eugene danielsen wrote on February 18, 2018 - 7:33pm Permalink
Read your story on this. I own a 2016 dodge charger hellcat plum crazy color. I was wondering what mode you selected to run down those quarter mile 1/4 times., or did you custom the mode?
Jay Gustafson wrote on February 20, 2018 - 6:40am Permalink
I set it to Sport mode, then set the suspension back to Street mode. I then saved that as my Custom setting. I tried Track mode for the trans, but it shifted TOO hard and spun the Pirelli's going into 2nd and 3rd gear every time. In sport it just barely hung on. I launched from an idle, in drive, and let the car shift itself, which allowed me to focus on getting it off the line. To do that, from an idle, I just rolled my foot onto the throttle. It took a lot of tries. Too fast and it spins, too slow and you leave ET on the starting line. I did severe burnouts to get the tires hot, which helped in the cold weather..
Don wrote on November 30, 2016 - 6:25pm Permalink
Do this on a 80 degree day, no way. These are hero runs in cold weather
Fasteddie wrote on November 30, 2016 - 7:44pm Permalink
Impressive. With just a bit of tuning, it will likely beat a Tesla...for a lot less money. No, not as clean or as quiet, but that is not why we would buy this car!
Jay Gustafson wrote on December 5, 2016 - 6:51pm Permalink
Don - Do other racers force themselves to shoot for records only on hot August days? The car is bone stock. The weather was perfect. Just like I wouldn't try on a rainy day, I wouldn't try when there's no oxygen in the air. It's not cheating. Besides, all the other stock Hellcats (A8's most of them) that were there were running11.40's and slower, and were hitting 124-125mph, even in the "good" air. After my first pass and I saw the speed I knew I had luckily wound up with "one of the good ones". It's got more power than the average Hellcat, by luck of the draw.. That doesn't change the effort required to get it off the starting line with those slippery Pirelli's. and it doesn't change the fact that it's now the first pure stock Hellcat in the 10's. :)