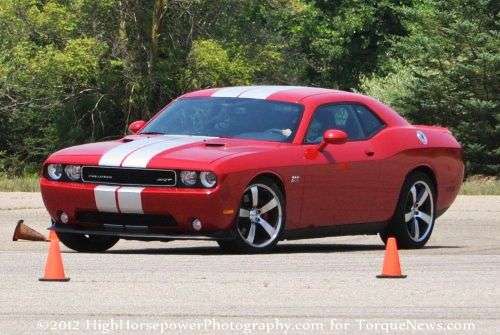 There has long been speculation that the Chrysler Group would replace the Dodge Challenger with a new model from the SRT brand named Barracuda but new reports indicate that both Mopar muscle cars could co-exist after the high performance “Cuda” is introduced sometime in 2014.
Advertisement

Rumors suggest that the new SRT Barracuda will be introduced sometime in 2014 (possibly in an effort by Chrysler to steal some of the next generation Mustang’s thunder?) and unlike the current Dodge Challenger, there will likely be no lower trimline models. The new Barracuda could pack a new supercharged 6.2L V8 along with an adjustable suspension package and a lighter chassis, with the main competition being the Chevrolet Camaro ZL1 and the Ford Shelby GT500 Mustang.

Whenever the SRT Barracuda has been discussed in the past, it was considered to be the vehicle that replaces the Dodge Challenger but these new reports indicate that the Challenger will continue on – without an SRT variant. The next generation Challenger will arrive for the 2015 model year with a wheelbase that is several inches shorter than the current models – although it may still be based on the basic architecture of the Dodge Charger sedan. We would expect that the next generation Challenger would offer some V6 and Hemi V8 option, whether it is the 6.4L motor currently at work in the SRT8 models or some new engine. It could even be a revamped version of the 5.7L engine current at use in the R/T but with the Camaro SS and Mustang GT both making well over 400 horsepower – the current R/T Hemi’s power input won’t cut it for the next generation.

While the modern Dodge Challenger has done a fine job of reintroducing the 2-door Mopar muscle car, the brawny coupe has often been criticized for not being competitive enough with the Chevrolet Camaro and the Ford Mustang. The current Dodge engine lineup has the power to compete with the best from Ford and GM but due to the greater curb weight, the Challenger has typically fallen just shy of the cross town rivals and a head to head format. This simple fact has spurred much speculation that the next generation of the Dodge Challenger will be smaller and lighter and while that could be the case – it seems like the chances of an SRT badged Barracuda are becoming greater.

Should the SRT Barracuda arrive early in 2014 (perhaps at the 2014 Detroit Auto Show), there would be so much interest and enthusiasm that the Mopar faithful would not be too upset about the lack of an SRT variant for the next generation Dodge Challenger. Also, if Chrysler wants to build a muscle car to compete with the Camaro ZL1 and the Shelby GT500, they are probably going to want to price it in the same ballpark as those other super muscle cars. The ZL1 and GT500 both start around $60,000 while the Challenger SRT8 starts in the low $40k range. Some might find it unreasonable to have the SRT variant of the Challenger jump from low 40s to the high 50s/low 60s so introducing a whole new muscle car with that higher price will help prevent sticker shock for Challenger buyers. At the same time, having the Challenger model continue with the V6 and lower performance V8 will allow Dodge to continue to reach those consumers who want a more affordable muscle car.

So to summarize, the 2015 Dodge Challenger should be smaller and lighter with a V6 and V8 model to compete with the Chevrolet Camaro V6 and SS along with the Ford Mustang V6 and GT. The 2014 SRT Barracuda will likely be based on the same architecture as the Challenger but with significant weight reduction, a much higher price tag and a new supercharged 6.2L V8.

Anonymous wrote on September 9, 2012 - 5:18am Permalink
That is indeed exciting news. I can't wait to see the new model!

LG's New EV Battery Plant Is a Welcome News for Tesla
Tesla Giga Berlin's New Hurdle: It's Not Only the Gov't, but Now Tesla Itself
END_OF_DOCUMENT_TOKEN_TO_BE_REPLACED