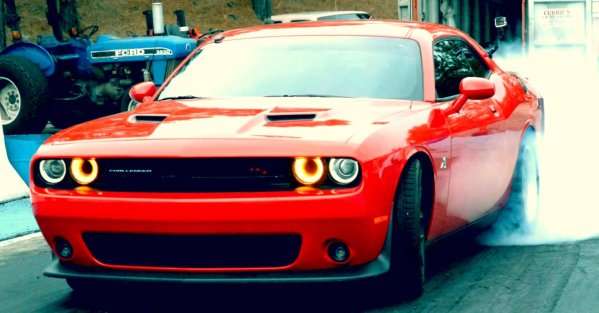 While we frequently bring you the news of the quickest Hellcat models from Dodge, today we bring you a look at what I believe to be the quickest Challenger Scat Pack in the world without any significant modifications – with just a good set of tires and a canned ECU tune helping this Hemi-powered muscle car to run well into the 11-second range.
Advertisement

Since the Dodge Challenger SRT Hellcat hit the streets, that factory supercharged muscle car has gotten the vast majority of media attention, thanks in part to the fact that some owners have gotten well into the 10-second quarter mile range with modifications as simple as a stronger driveshaft and sticky tires. The level of interest around the Hellcat models makes sense, as it is the most powerful American production car ever and it is one of the quickest stock cars in the world, but the Hellcat isn’t the only Challenger which offers impressive performance with a surprisingly low price.

Joining the Hellcat as one of the most popular options in the modern Dodge Challenger lineup is the Scat Pack trimline – a budget package powered by the same 6.4L Hemi that motivates the non-Hellcat SRT models. With 485hp and 475lb-ft of torque, the Challenger Scat Pack is the most powerful performance car that you can buy for under $40k in the US, making it a very attractive option for those who want to go fast, but who want to do so without spending $55,000. In fact, the Scat Pack has proven to be one of Dodge’s most popular trimlines for the Challenger and like the Hellcat, there have been times where finding a Scat Pack Challenger on a dealership lot was nearly impossible.

One of the people who bought a Dodge Challenger Scat Pack for the impressive mix of performance and affordability was Delano D Mcfarlane, and since getting his Hemi-powered muscle car, he has proven that the Scat Pack can turn just as many heads as the Hellcat. Sure, the Scat Pack might not be quite as quick, but it is every bit as surprising as the Hellcat models - it not more.

The Quickest Stock-ish Challenger Scat Pack?
Delano D Mcfarlane’s Dodge Challenger Scat Pack is not completely stock, but his brief modification list includes Nitto drag radials and a canned tune from the well-known Mopar tuning expert Hemifever. Delano has also removed the mufflers of his Challenger, but that simply adds more sound – not more power. He has also raced with and without an aftermarket cold air intake, but in finding that it didn’t run any better with the aftermarket piece, he has gone back to the factory air intake setup.

In short, Delano’s Challenger Scat Pack has a stock engine, stock transmission, stock suspension and a fully factory interior, with a little more power added with the tuner and better traction via the drag radials. This is why I call his car stock-ish, as to look at it, it appears to be a factory car with stickier tires, but with just those tires and the tune, his Scat Pack Challenger is running consistent 11-second quarter miles and his best run ever was an 11.58 at 117 miles per hour. (Watch the record run on page 2)

Prior to breaking into the 11.50s, Delano’s had been running 11.60s on his best trips to the track with the normal runs being in the 11.7-11.8 range. For comparison, I have made a few quarter mile runs in a completely stock Dodge Challenger Scat Pack (identical to Delano’s car minus the tune and tires) and I was able to run 12.40s on a poorly prepped track.

For those wondering, his record time of 11.58 was run at Fayetteville in North Carolina on a 60 degree night, so he had good, cool air to run his best times, but for a Challenger with a base price under $40k – mid 11s with tires and a tune is mighty impressive.

Now, as for Delano’s Challenger being the quickest of its type, I have been unable to confirm that, but I do know that of all of the Scat Pack Challengers I have seen racing in person and online – none of run mid 11s with a mod list as short as tires and a tune. I have seen similar cars crack into the 11-second range, but I haven’t seen any run this far into the 11s. If anyone out there has a Scat Pack Challenger with tires and a tune which has run quicker than 11.58, I would love to hear more about it, but until someone speaks up – I am inclined to call this Challenger the quickest Scat Pack on the streets without any significant modifications.

The video below shows Delano’s Challenger stomping a Honda Civic and running the record 11.58 at 117 miles per hour. Crank up your speakers and enjoy!

Rich wrote on December 19, 2020 - 11:39am Permalink
would love to what size nitto tires and what presure and are the nitto tires better than nexan