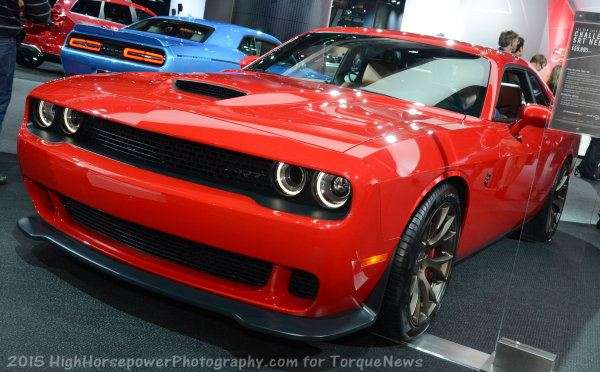 While the Dodge Challenger trailed both the Ford Mustang and Chevrolet Camaro in January sales, the numbers from the first month of 2015 are a very clear sign that the 2015 Challenger has led to a big spike in muscle car sales for the Chrysler Group – one which is likely to continue as we get into the summer.
Advertisement

Over the past 37 months (dating back to January 2012), the Dodge Challenger has ranked third in muscle car sales all but one time. In the modern era of the Challenger, it has never led the segment in sales and the only time that it was second came back in September 2014, when the Challenger outsold the Mustang, but fell short of the Camaro. Because of this, the muscle car sales race coverage doesn’t touch much on the Challenger, but since the 2015 models began reaching dealerships late last year, the sales numbers for the brawny Mopar muscle car has been consistently strong.

While the Dodge Challenger might not pose a real risk to the Mustang and Camaro, the continued success of the 2015 models is something that should be noted by everyone in the industry.

Winter is traditionally the worse time of year for muscle car sales, yet the 2015 Dodge Challenger has sold at record levels…and its only likely to get better as the weather warms up around the US.

New Models Lead to More Sales
The 2015 Dodge Challenger has sold well since hitting dealerships late last year, but that is to be expected from any new version of a model with such a strong enthusiast community. The early rush to get the new Hellcat Challenger has helped bolster sales over the last two months while the general interest in the redesigned Challenger has further helped sales numbers to grow, so it isn’t just Hellcat enthusiasm boosting the sales figures.

In addition to the popularity of these new models growing as winter fades, the Dodge brand has more new Challenger trimlines planned for a spring arrival. When the 2015 Challenger was first introduced last April in New York, the SRT Hellcat model wasn’t there, but there were two different trimlines with the modern Shaker hood design. Both the Challenger R/T with the 5.7L Hemi and the R/T Scat Pack with the 6.4L Hemi were introduced in New York, but those models haven’t been marketed as the new models have reached showrooms. Instead, Chrysler has delayed the arrival of the 2015 Challenger Shaker models, with an expected spring arrival of the 375 and 485 horsepower Shaker models. When the Shaker versions of the 2015 Challenger arrive later this year, we can expect to see another sales rush and while it won’t be anywhere near the initial rush last year for the 2015 Challenger – the demand for the Shaker packages could help keep Challenger sales strong well into the summer months.

david wrote on February 6, 2015 - 6:06pm Permalink
MOPAR RULES!!!!!!!!!!!!!! THAT'S ALL*******
Wolfgang Bergstrom wrote on February 9, 2015 - 1:47pm Permalink
they need to bring back the challenger drop top. the original had it and the camaro and mustang are selling many convertibles. this would boost sales further by opening it to a new audience. great GT car/muscle car needs a drop top.
Stu wrote on August 24, 2016 - 4:05pm Permalink
I agree the Challenger looks great but after that, why would anyone buy one? Way way more expensive than a Mustang or Camaro. You need an R/T just to keep up with the base Camaro or Mustang.

LG's New EV Battery Plant Is a Welcome News for Tesla
Tesla Giga Berlin's New Hurdle: It's Not Only the Gov't, but Now Tesla Itself
END_OF_DOCUMENT_TOKEN_TO_BE_REPLACED