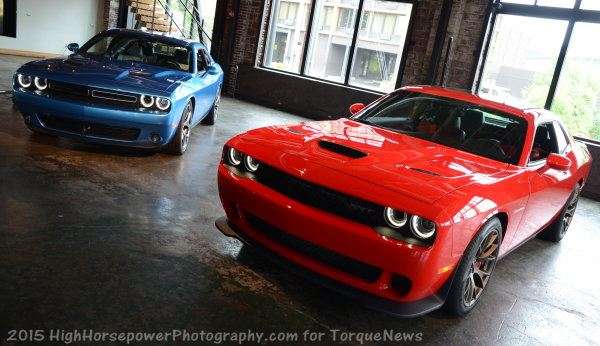 The Dodge Challenger did something in March 2015 that it has not done before, outselling the Chevrolet Camaro for the first time since the 5th generation Camaro was introduced for the 2010 model year – showing just how big of a difference the light refresh and the extra injection of Hellcat horsepower made as Challenger sales numbers continue to grow.
Advertisement

I have been closely covering the monthly muscle car sales race here at TorqueNews since the late 2011 calendar year and in that time, I have built a long spreadsheet of sales figures for the Ford Mustang, the Dodge Challenger and the Chevrolet Camaro. In that time, the Dodge Challenger has ranked third in terms of monthly sales only one time over the course of more than 40 months, but with the Challenger lacking a convertible, Dodge has a smaller lineup of muscle cars to offer buyers and at this point, seeing the Challenger in third place behind the Camaro and Mustang has become a normal occurrence.

The only time that the modern Challenger outsold a competitor was September 2014, when prospective Mustang buyers were holding out for the 2015 models so the monthly win wasn’t due to good Challenger sales so much as it was caused by extremely poor Mustang sales. In March 2015, the story was a little different, as the Dodge Challenger moved 6,110 new models, making last month the second best sales month for the new Challenger since it was introduced for the 2008 model year. The best month ever was back in March of 2014, when 6,132 Challengers were sold, so this March fell just 23 units short of setting a new monthly sales record.

In posting this near record-setting sales figure, the Challenger finished second in monthly sales, trailing the Ford Mustang by more than 6,000 units, but beating the Chevrolet Camaro by 154 units. GM sold 5,956 Camaros last month.

The Challenger Sales Boom
When the 2015 Dodge Challenger was introduced last year with a very minor refresh and a few new models, some skeptics insisted that it wasn’t new enough to spur sales. Sales figures for the 2014 Challenger had leveled out and it was widely agreed upon that it was time for a change, but when the 2015 models were introduced with little more than a new grille, new taillights, a nicer interior and two new trimlines, some insisted that this would spell the demise of the Mopar muscle car.

Fortunately, those skeptics could have been more wrong, as the sales figures for the 2015 Dodge Challenger have been very good, posting record or near-record months every month since the new models began reaching dealerships. A big part of the Challenger sales surge is the addition of the 485 horsepower R/T Scat Pack trimline and, of course, the 707 horsepower SRT Hellcat model. Even with the factory being unable to quickly meet the demand for the SRT Hellcat Challenger, the monster muscle car has helped to increase sales right along with the new Scat Pack.

Best of all, with the Chrysler Group management looking at thousands of outstanding orders for the Hellcat Challenger, we are likely to see sales numbers for the Dodge muscle car remain high into the summer months. In the meantime, those folks coming to the dealerships to touch the Hellcat that they cannot afford are buying less expensive models every day. Plus, with the 6th gen Camaro being introduced in May with the first units expected to arrive late this year, the Camaro could see a continued sales slump as buyers hold out for the next gen models and the accompanying deeply discount "old" models once the 2016 Camaro arrives. In other words, this might not be the only time that the Challenger outsells the Camaro this year.

Tom Mc Fadden wrote on April 3, 2015 - 9:44am Permalink
VERY interesting article. I am 64, 65 end of June, last October when the SCAT PACK Challengers hit the showrooms, I was the first in my area to get one, a Tri Coat Black Pearl Scat Pack, automatic. every option! Well, gets better, I traded in my 2010 Camaro SS, Black, Auto, with only 10,000 miles on it, and my 2011 Mustang GT, Kona Blue, six speed, also with only 10,000 miles on it...................I traded them both for my SCAT PACK and SO very glad I did. This car is amazing, that 8 speed Automatic is awesome. The color, even that paint is an option, a $500.00 option, is a gorgeous color, people who see the car love it. That 485 horse motor is also awesome! Gets better again. On February 27th., I ordered my HELLCAT Challenger, B5 Blue Pearl, automatic again, and the special black leather interior, and the new Bronze monkey wheels..................I might not see it for awhile yet, but I know I have a real nice Hellcat heading my way. Nothing better in my eyes than having a Hellcat and a Scat Pack. I got pulled over for speeding the first weekend I had the car, in New Jersey, the look on the young officers face when I rolled the window down was totally priceless..........when he saw how old I was driving that sinister looking car, he just gave me a warning, no ticket..............good luck to you all............All three of those cars, the Challenger, the Camaro and the Mustang are all great cars.........I just love these Challengers though!