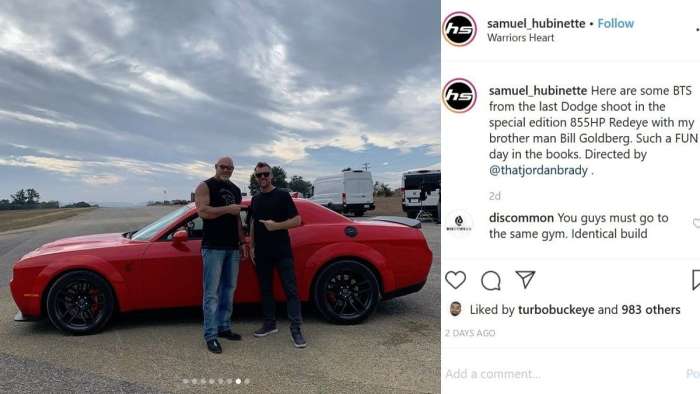 Legendary drift champ Samuel Hübinette recently helped with the Dodge Horsepower Challenger and in the process, he may have tipped the world off to a new Challenger SRT Hellcat Redeye Special Edition with 855 horsepower.
Advertisement

If you pay any attention to what is going on with the Dodge brand, you are aware that FCA is running a contest called the Dodge Horsepower Challenger and the grand prize is a handful of specially prepared Dodge Challenger SRT Hellcat Redeyes. The plan was to give away one Challenger Redeye during each of the five weeks, but an issue with week one led the company to add a week. As a result, Dodge will give away six specially prepared Challenger Hellcat Redeyes, with help from the Mayor of Muscleville, Bill Goldberg.

Goldberg has been involved with this program since the beginning, but it looks like drift champ Samuel Hübinette is getting involved as well. He recently posted a series of pictures and videos to Instagram, showing him, Goldberg and one of the Dodge Challenger SRT Hellcat Redeyes being given away. The behind-the-scenes shots are pretty cool, but it is what Hübinette said, not what he showed.

In one post, Samuel Hübinette used the hashtag “#855hp” and in a later post, he referenced the “special edition 855HP Redeye”. As you likely know, the current Redeye Challenger has 797 horsepower, so the car being discussed on Instagram has an additional 58 horsepower. We don’t know where that extra power came from, but we like the sound of an even more powerful Dodge Challenger. 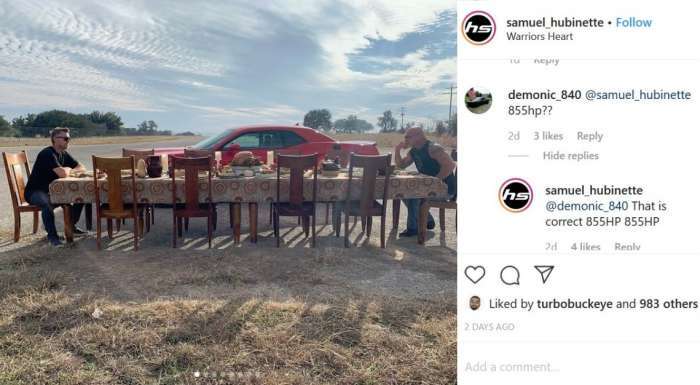 Dodge Challenger Redeye Power
The current Dodge Challenger SRT Hellcat Redeye is powered by a supercharged 6.2-liter V8 that delivers 797 horsepower and 707 lb-ft of torque. It features a similar engine to the drag strip-purposed 2018 Challenger Demon, but the Redeye is designed for all-around performance and on-road comfort.

There have long been rumors that Dodge has been working on a stronger Challenger for quite some time. Some rumors claim that it will be powered by a supercharged 426-cubic inch Hemi with upwards of a thousand horsepower. Basically, some people expect to see a road-going Challenger powered by the Hellephant crate engine, but we are a little skeptical of that.

On the other hand, the aftermarket has proven that it doesn’t take much work to lift the engine in the Dodge Challenger SRT Hellcat Redeye up to 855 horsepower. We know that the same basic engine in the 2018 Demon offered 808 horsepower on pump gas and 840 horsepower on race gas, but we also know that a slightly smaller (compared to stock) supercharger pulley and an engine tune easily increase the output of the Redeye from 797 to 855 horsepower.

Special Edition Redeye
When the Dodge Horsepower Challenger was introduced, it was stated that the cars being given away were special edition Hellcat Redeye models, but we figured that the special edition was a simple package that was little more than a unique paint-and-interior combination. Based on Hübinette’s comments on Instagram, these special edition cars could be much more than an appearance package.

Based on what little we know, it seems possible that Dodge could be giving away six (originally five) modified Challenger SRT Hellcat Redeyes with 855 horsepower. Perhaps these cars are an early look at a future model, or perhaps they are outfitted with upgrades from Mopar.

Mopar has offered performance upgrade packages for various models in the past, including the Scat Pack upgrades for the Challenger and Charger, but none of those packages ever applied to the Hellcat models. When the Neon SRT4 was still available in the early 2000s, Mopar offered stage kits that added massive amounts of power, and in the 1990s, Ram 1500 owners could buy a pre-programmed performance engine computer for the 5.9-liter Magnum V8. Those are options that would likely appeal to owners who don’t want to go with a private tuning company.

More Mopar Performance?
I spoke with Mark Bosanac, Head of Mopar for North America at the 2019 SEMA Show, and I asked if any sort of Hellcat performance parts packages had been considered. I mentioned the stage kits for the Neon SRT4 and the more recently Scat Pack stage kits, pointing out that as a Hellcat owner, I would be interested in something like that for my Challenger. He simply told me to “stay tuned”, and that is better than a hard “no”. Also, was “stay tuned” a subtle joke about engine tuning? 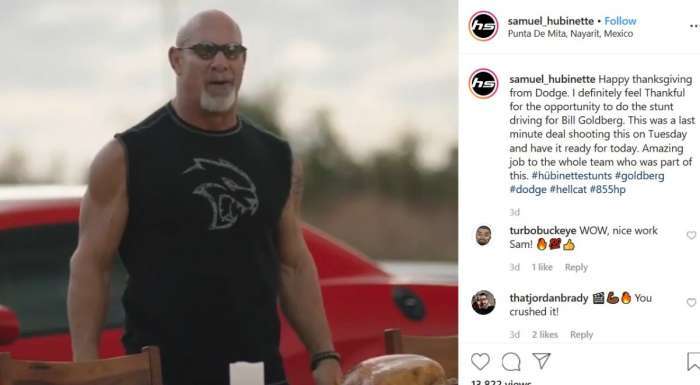 Perhaps I was to stay tuned for tuning option information from Mopar and perhaps the special edition Hellcat Redeye Challengers being given away in the Dodge Horsepower Challenge will be the first to feature those optional upgrades.

Of course, there is the possibility that the special edition Challenger Redeye with 855 horsepower, and there is also a chance – albeit a slim one – that Samuel Hübinette was mistaken with the horsepower levels. I think that it is more likely that the Challengers being discussed are either a new special edition package coming in the future, or they feature the Mopar tuning packages that many owners have been hoping to see come to market.

Tsingshan's Threat to Tesla: EV Maker Is In Battery Crosshairs
Tesla-Funded Research Reveals One of The Biggest Mysteries of EV Battery
END_OF_DOCUMENT_TOKEN_TO_BE_REPLACED