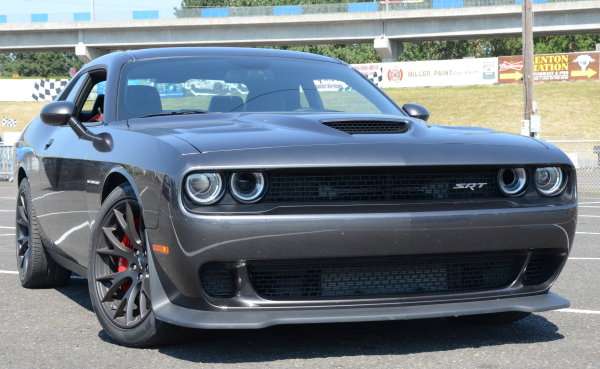 Dodge Challenger Hellcat Good for 825hp, Not Good for Emissions

Since the days of the original Dodge Challenger Hemi back in 1970 (and beyond that), automakers have been understating the power of performance engines for a variety of reasons so it shouldn’t come as much of a surprise that the 2015 Challenger SRT Hellcat is a touch underrated – even with stated numbers as crazy as 707 horsepower. According to the folks at Jalopnik, an unnamed insider explained that the 707 horsepower number is a conservative figure and during internal testing, the company pushed the new supercharged 6.2L Hemi as high as 825 horsepower.

The unofficial fact that the 2015 Dodge Challenger SRT Hellcat could make as much as 825 horsepower is some very good news for those looking to purchase one and go very fast, but there is also some bad news. This same industry insider told Jalopnik that the company has had some “extreme issues” when trying to meet some emission regulations in the 700+ horsepower mode.

Monster Power from the Monster Hemi

The Chrysler Group rocked the performance car world earlier this year when they announced that their new 2015 Dodge Challenger SRT Hellcat would produce an incredible 707 horsepower and 650lb-ft of torque. Those numbers make the Hellcat Hemi the most powerful American production road motor ever and according to the source who spoke with Jalopnik, that number is conservative.

Some videos have already surfaced showing the Hellcat Hemi Challenger on a dyno, putting down numbers that would either make this new Challenger the most mechanically efficient car ever or one that is slightly underrated from the factory. The odds are good that the Hellcat Challenger is underrated and according to this mystery source, that doesn’t come as a big surprise as internal testing saw the output of this blown Hemi climb as high as 825 horsepower.

Needless to say, if Chrysler Group engineers were able to coax 825 horsepower out of the 6.2L Hellcat Hemi, we can most certainly expect some absolutely incredible numbers once aftermarket tuners get their hands on the newest Challenger. If Chrysler was truly able to hit 825hp when testing this engine on the dyno, that suggests that it can be done all with the stock components so someone trying to get more than 707hp from their 2015 Challenger SRT Hellcat very likely will be able to do so without changing anything aside from the engine calibration and maybe a new supercharger pulley.

That likely doesn’t come as a big surprise to anyone who has worked with factory supercharged performance motors in the past, but I wanted to point that out for folks who have not.

Hellcat is Not so Emission Friendly
Unfortunately, the Jalopnik piece detailing the true capabilities of the 2015 Dodge Challenger SRT Hellcat isn’t all good news, as he or she also explained that the company is having some “extreme issues” when trying to meet some emission requirements while set to the 700+ horsepower mode.

Even if you know nothing about emission regulations around the country, when you consider the fact that the Hellcat Hemi at wide open throttle will chew up 1.5 gallons of gas and enough air to fill an average bedroom in about 60 seconds, it isn’t hard to imagine why the 2015 Challenger with 707 horsepower might have a hard time meeting emission expectations.

There weren’t any more details explaining just what the problem might be or how Chrysler is looking to address the problem, but this emission concern may have been the reason which delayed Hellcat Challenger orders from being accepted earlier this month.

While it isn’t hard to see a 707+ horsepower engine failing to meet emission requirements, this comes as a surprise to me as the company certainly had these regulations in mind during the developmental stages of the 2015 Dodge Challenger SRT Hellcat. Getting the beast to meet those requirements while in the 700+ horsepower mode was likely just a matter of some tweaks here and there so while this issue might not impact customers going forward – this definitely could have been the cause for the delay in Hellcat orders from when they were first rumored to begin to when they actually began.

Dean Voss wrote on November 1, 2014 - 2:33pm Permalink
I looked at the dyno video on youtube for the 2015 challenger hellcat. It had 603 rwhp I don't know what brand dyno they used and I want to find out. My 2010 Camaro was dynode at 603 rwhp on a Mustang dyno. The Mustang dyno reads rwhp lower than other dynoes. I would like to know what the hellcat would do on a mustang dyno.
Max Looker wrote on March 10, 2015 - 12:36am Permalink
Water injection combined with better ignition timing would improve emissions as well as reliability and HP. I personally would love to hear the follow up to the Hellcat produces 825+ HP with less thermal stress. Better injectors with cylinder deactivation might be necessary too. Refilling a water tank is worth 100+ HP though.
Shawn wrote on July 3, 2015 - 2:31pm Permalink
you my friend know nothing about emission control
Alex Peitz wrote on August 4, 2015 - 11:20pm Permalink
Hello all, Just wanted to let you know there are no emissions tests at wide open throttle. Therefore, it is not regulated and is not the reason why the engine may have been "de-tuned" from the factory. Most likely, there were other considerations factory calibration engineers took into account to determine the additional power was not needed. More often than not, this is due to warranty concerns etc. However, the Hellcat from the factory runs very lean for a supercharged multi-port fuel injection engine i.e. 12.7:1 AFR, when after tuning them to 11.5:1 AFR (tailpipe figures) they pick up a LOT of additional power. With R&D, we have seen an additional 50 horsepower or more with JUST tuning. Nevertheless, its a great car! I just wanted to share some of my findings with the world! Look for our article in Fastest Street Car coming out August 25th! Thank you! Alex Peitz Instructor The Tuning School [email protected]