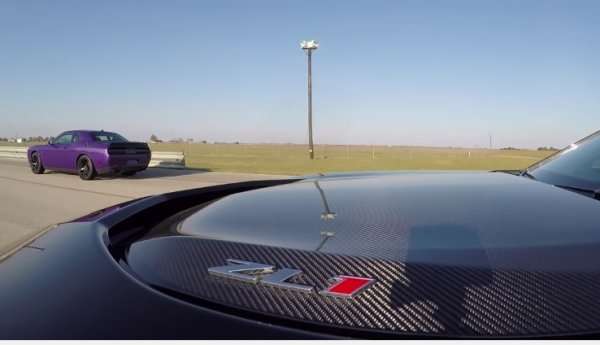 The first video showing a Dodge Challenger SRT Hellcat racing a new Chevrolet Camaro ZL1 has arrived online courtesy of the folks at Hennessey Performance, and in this first matchup of the two supercharged American muscle cars – the Hellcat took the win time after time.
Advertisement

A few weeks back, we featured a video from the team at Hennessey showing the C7 Chevrolet Corvette Z06 roll racing against a new Chevrolet Camaro ZL1. In that video, John Hennessey mentioned that they would like to have a race between the Dodge Challenger SRT Hellcat and the new Camaro ZL1, but they needed the owner of a stock Hellcat Challenger to bring his or her car to the Hennessey test track.

Well, it seems that they found someone, as this past weekend, Hennessey Performance published the video below on their YouTube channel, showing a Dodge Challenger SRT Hellcat racing – and beating – the new Camaro ZL1.

The Clash of the American Titans
Before getting into this highly anticipated race between the Dodge Challenger SRT Hellcat and the new Chevrolet Camaro ZL1, there is one key detail that we need to point out. The Hellcat Challenger is fitted with the lightning-quick 8-speed automatic and the Camaro ZL1 features the 6-speed manual transmission. The Hellcat Challenger’s transmission shifts very quickly, giving the Dodge an advantage over the manual transmission and even though the person driving the Camaro is a skilled driver – it is obvious that he isn’t shifting the car as hard as he could be. In fact, in the post-race discussion, John Hennessey mentioned that the Camaro driver was not “speed shifting”.

Hennessey also explains that on their dyno, the Camaro ZL1 made around 570 wheel horsepower while the Challenger made 640 wheel horsepower, but the Chevrolet is around 500lbs lighter (per Hennessey’s comments) – resulting in a very similar power to weight ratio.

The Races
In the video below, John Hennessey drives the Plum Crazy Hellcat Challenger against the black Camaro ZL1 three times and in each of the runs, the two cars roll around a tight turn, get side by side and hit it hard when they reach the starting line. When the race begins, each car is going roughly 40 miles per hour and the race lasts for around 1,400 feet, so this is more or less a quarter mile roll race, starting at 40mph.

The racing action is filmed from a camera at the starting line, two cameras at the finish line and a camera on each car.

On the first run, the Challenger jumps out to an early lead and when the Camaro ZL1 driver shifts, the Hellcat hops far enough ahead that the race was effectively over. From the finish line cameras, it looks like the Hellcat is about a length ahead of the Camaro.

On the second run, the story is the same, with the Hellcat Challenger taking a small early lead, then pulling away when the Camaro driver has to shift. In the end, the Challenger put its rear bumper at the Camaro’s front bumper at the finish line.

Finally, on the third race, the finish line cameras appear to show the Camaro ZL1 getting there first, but when you watch the third race from the camera on the Camaro, we can see that the Hellcat still held a healthy lead towards the end of the race. On this run, the Camaro hops out to an early lead, but the Challenger closes that gap when the Camaro shifts and from there, the Dodge just continues to pull away. Oddly, when you watch this race from the Camaro, it looks as though the Challenger slowed dramatically right before the finish line, but we can clearly see that the Dodge was ahead late in the race.

While the Chevrolet camp will surely point out that the biggest gains were made when the Camaro driver shifted, we can see that the Hellcat is still slowly creeping away from the ZL1 between shifts as well. Under power, even with the disadvantage in weight, the Hellcat Challenger is able to pull on the Camaro, so even with the smoother shifts of the 10-speed automatic, it is going to be tough for the Camaro to drive around the Challenger.

Kenny wrote on January 7, 2017 - 5:52pm Permalink
I wouldn't waste my $ on any new Chrysler product. They R they worst for . Careing about their products reliability, warranty ect.... Nice looking car and fun for a bit. But, know from experience they are pathetic!!! Buy one and prove me wrong! Lol
Elijah Fox wrote on April 25, 2017 - 7:43pm Permalink
I sense some jealously there Ken. Dodge has the fastest factory cars in the world.