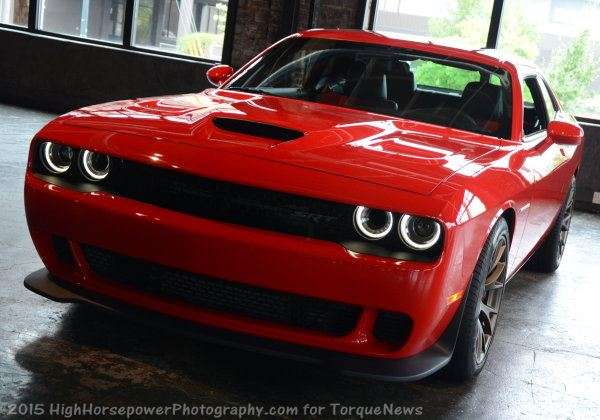 The Chrysler Group has announced a voluntary and preventative recall of the 2015 Dodge Challenger SRT Hellcat and 2015 Dodge Charger SRT Hellcat to inspect a seal in the fuel line of the 707 horsepower Hellcat Hemi, even though not a single customer has experienced the problem that has caused this recall.
Advertisement

While the Hellcat-haters who wish that they had a 707hp muscle car with a full warranty will certainly poke fun at this recall of the 2015 Dodge Challenger with the supercharged 6.2L Hemi V8, it should be pointed out that this recall does not come after a formal investigation. In fact, of the 2,200+ Hellcat Challengers and Chargers delivered thus far, not a single one has experienced the problem at fault for this preventative voluntary recall.

The One Hellcat Hemi Fuel Leak
Recently, one of the new 707 horsepower Hellcat Hemi-powered Dodge cars was at a dealership being inspected for delivery when the technician discovered that one of the fuel lines was leaking. Upon further inspection, it was found that the line seal had not been installed correctly and the automaker wants to make sure that this problem isn’t affecting any other vehicles, even though there have been no reports of fuel line leaks from any of the owners. So, to make sure that the fuel line seal found to be causing the leak hasn’t been installed incorrectly in those vehicles in the hands (and garages) of private owners are not affected, Chrysler is recalling every Hellcat powered Challenger and Charger delivered thus far.

In total, there are have been 2,211 cars delivered with the supercharged Hellcat Hemi and while no breakdown has been offered on how many of those are Challenges and how many are Chargers, the odds are good that the vast majority of the 2-door Challenger coupe, as it has been shipping to buyers for a much longer period of time. Of those 2,211 707hp Dodge muscle cars, 2,012 are in the United States, 148 are in Canada, 30 are in Mexico and 21 are outside of mainland North America.

The Fix
Since there have been no reports of leaky fuel lines in any of the privately owned Dodge Challenger or Charger models with the Hellcat Hemi, this recall is centered around an inspection rather than a repair. The problematic fuel line fitting will be inspected and if the seal is found to have been installed incorrectly, at that point, the simple fix will be made.

Based on the information available, it sounds as though the inspection will be fairly quick and if repairs are needed, something as simple as removing and installing a seal shouldn’t take long either. With that in mind, I would strongly recommend that Hellcat Challenger and Charger owners make arrangements to have their cars inspected under recall, as a fuel line leak isn’t something that you want to leave to chance.

While many of the flagrantly unintelligent internet mouths will be quick to take shots at Chrysler for this recall of the most powerful muscle car ever and the most powerful sedan in the world, it is a smart move by the automaker. Having to endure the headache of a preventative recall to address a possible fire risk is far less costly than having privately owned cars catch fire – ask Tesla.

Turbofroggy wrote on March 2, 2015 - 3:24pm Permalink
Uh oh, must have used the Red Key...
Vanessa wrote on March 3, 2015 - 3:06pm Permalink
Great! Thanks to the media The phone calls have started.. Ran a guys vin already NO RECALL ON HIS HELLCAT according to Chrysler.
John Alexander wrote on March 21, 2015 - 5:47pm Permalink
Hats off to Dodge! Now I know why my Hellcat is late arriving. It's in Atlanta awaiting inspection by a technician from Michigan. Nip it in the bud! I like that!