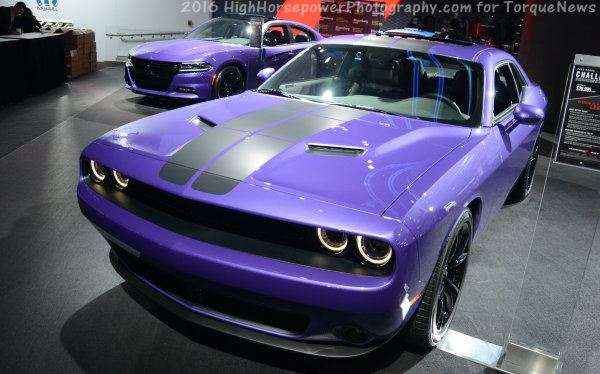 The 2016 Dodge Challenger and 2016 Dodge Charger in Plum Crazy purple proven to be so popular that the Chrysler Group management has decided to extend the order window for this striking exterior shade through the end of this month for most models – from the V6 SCT Plus to the 707hp Hellcat packages.
Advertisement

While the start of the 2016 North American International Auto Show in Detroit didn’t bring about any new power or packages for the Dodge Challenger or Dodge Charger, the company had an example of the sport sedan and the brawny muscle car in the stunning new Plum Crazy purple hue. This color was announced last year for the 2016 model year and it formally went on sale (became available in the order banks) late in the 2015 calendar year, but the company had planned to only offer it during the first few months of 2016 Challenger and Charger orders. However, the reception for Plum Crazy purple Challengers and Chargers has been so strong that the company has extended the ordering window, which will officially come to a close at the end of January.

Plum Crazy Purple 2016 Challenger and Charger
The offering of Plum Crazy purple for the 2016 Dodge Challenger and Dodge Charger is different from past Plum Crazy packages, as you can get this color on almost any new Dodge muscle car. In past years, you could get Plum Crazy with some specific packages like the Challenger R/T Classic package or with the Dodge Charger R/T Daytona, but you in the years where it was offered over the past decade, buyers were limited in terms of trimlines and options on purple cars.

The company changed that for the 2016 Dodge Challenger and Charger, making it available for nearly every trimline in both of those model lines, with only the Challenger SXT and Charger SE – both of which are base models – lacking the Plum Crazy option.
Not surprisingly, opening up the availability of Plum Crazy purple across most of the 2016 Charger and Challenger trimlines has made it incredibly popular. This has likely been multiplied by the fact that there is no upcharge for this eye-catching color on most trimlines of the Challenger and Charger, giving buyers the option of grabbing this historic Mopar color without the usual “fancy paint price increase”.

New Hellcat Stripes
While the Hellcat Challenger and Hellcat Charger are relatively unchanged for the new model year (shy of the Plum Crazy paint and standard premium leather interior), the company has rolled out a set of carbon fiber full length body stripes for both of the 707 horsepower Dodge muscle cars. These stripes will be available throughout the rest of the 2016 orders and they carry an MSRP of $995.

Oddly, these stripes were not on display during the first day of the 2016 Detroit Auto Show and it should be noted that the Challenger above is not wearing the new stripes (nor is it a Hellcat model).

William Bentrim wrote on October 27, 2016 - 11:01pm Permalink
Any suggestions on where to find an AWD Charger in plum crazy? I have tried quite a few online sites to no avail?

LG's New EV Battery Plant Is a Welcome News for Tesla
Tesla Giga Berlin's New Hurdle: It's Not Only the Gov't, but Now Tesla Itself
END_OF_DOCUMENT_TOKEN_TO_BE_REPLACED