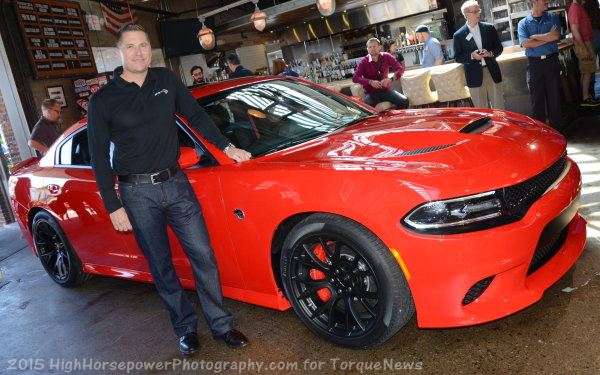 Dodge brand CEO Tim Kuniskis recently spoke with the LA Times about the popularity of the 2015 Dodge Charger and Challenger with the 707hp Hellcat Hemi, and when addressing the huge backlog of orders coupled with more people who want to place orders, Kuniskis stated very clearly that the automaker will “make them all happy."
Advertisement

When the new action packed racing flick Furious 7 debuted last weekend, Dodge brand CEO Tim Kuniskis was in the crowd of celebrities at the Chinese Theater, as Dodge brand vehicles were some of the stars of the show. The new 2015 Dodge Charger and 2015 Dodge Challenger were both featured in Furious 7, along with a few other classic Mopar muscle cars, but when the LA Times caught up with Kuniskis at the movie premier, the key topic of discussion was the Hellcat Hemi.

Fixing the Hellcat “Problems”
While the Hellcat Hemi really has nothing to do with Furious 7, the 707 horsepower V8 has been one of the biggest things to hit the American market since the original 426 Hemi debuted back in the mid 1960s. The popularity of this engine and the vehicles equipped with it caught the Chrysler team off guard and because of that, the demand has far exceeded the early production rate. This caused a huge backlog of orders, a lengthy waiting list and a temporary shut-down of the Hellcat Challenger and Charger order banks.

The Hellcat powered Dodge Challenger and Dodge Charger are among the most powerful street legal production cars in the world with a price that is far below the cost of competitive vehicles, so it makes sense that these two 707hp Mopar muscle cars would be hot sellers. Unfortunately, the delay caused by the huge number of orders has upset some buyers while other prospective buyers are upset that they are unable to order a Hellcat Challenger or Charger, but Tim Kuniskis told the LA Times that the company is working through the waiting list and they will re-open the order banks. The brief interview ended with Kuniskis saying "We'll make them all happy."

Making Them All Happy
Based on the discussion, when Tim Kuniskis says that the company is going to make them all happy, he is talking about two groups of people. The first includes those folks who have already ordered a Hellcat Challenger or Charger and the backlog has forced them to wait, without really knowing how long they will be waiting. The second group includes people who want to place an order for the Hellcat Challenger or Charger, but since the order banks are closed, they cannot place that order.

If Dodge is to make all of those people happy, the company will need to do three things. First, they need to work through all of the actual orders from customers rather than worrying about orders from dealerships that are likely to just sit around on the showroom floor with a huge price markup. They need to actually fill the orders that have been placed by customers with cash in hand. Second, they need to re-open the order banks, again focusing on dealerships that have actual customers lined up. Third, they need to fill those new orders and then – and only then – they should start building Hellcat cars for dealership stock.

Following this three step process would certainly make all of us happy, but with the production constraints of the Hellcat Hemi, it is hard to imagine just how long it will take the Chrysler Group to successfully build all of the cars needed to make everyone happy.