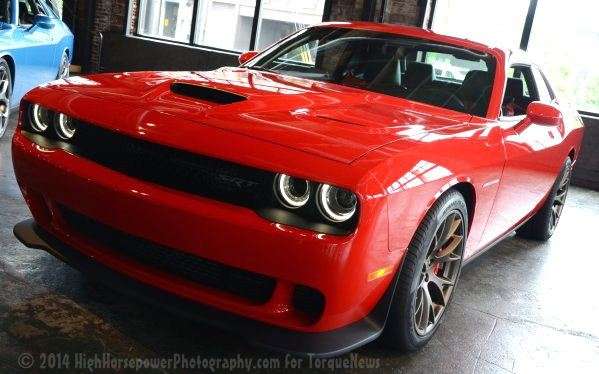 Dodge Boss: No Production Limits for Hellcat Charger or Challenger

Shortly after the first 2015 Dodge Challenger Hellcat models were introduced to the media, a report surfaced suggesting that the 707hp Hellcat Challenger would see just 1,200 examples – a report which Dodge boss Tim Kuniskis insists is 100% inaccurate and unfounded, as the company plans on building as many Hellcat powered Chargers and Challengers as they can sell.
Advertisement

When I attended the first wave of the 2015 Dodge Challenger media drive in Portland Oregon, we got to meet all of the 2015 Challengers, but the main focus was on the 707 horsepower Challenger SRT Hellcat. While the representatives from the Chrysler Group, SRT and the Dodge brand talked about all of the new models – from the powerful V6 to the new R/T Scat Pack to the Hellcat Hemi – the focus of the media was on the models that offer more power than any American production car ever.

No Production Limits Mentioned at First
While at the event, the media and the folks from Dodge talked about all sorts of information on the 2015 Dodge Challenger SRT Hellcat including the price, specifics on the engine and the rest of the drivetrain, the performance capabilities and the unique exterior design that separates the Hellcat powered models from the rest of the 2015 Challenger lineup. What we did not discuss was any sort of production constraint…but shortly after the first few groups of journalists spent time with the Hellcat Challenger, a report from Edmunds insisted that the Hellcat models would indeed be limited production and with 1,200 units expected – the Challenger SRT Hellcat could be a tough one to get ahold of once they reach dealerships. Worse yet, low production leads to an excess of demand that would allow dealerships to send the price through the roof as prospective buyers line up to pay top dollar for one of the most powerful American production cars of all time.

Since that report surfaced, it has spread like wildfire as critics of the Hellcat Challenger have been quick to insist that it will simply become another high dollar collectable that will be purchased for well over MSRP and then stored away in a garage. Fortunately, it seems that the Edmunds report was incorrect, as Dodge brand president and CEO has made it very clear that the company has no intention of capping production.

Of course, I have to point out that while the 707 horsepower Challenger and Charger are not subject to any specific production limit, there is probably a maximum capacity for the Hellcat models as the company can only build so many of the 6.2L supercharged Hemi engines in a given amount of time. Between the intricate assembly process and the high performance break-in/testing period on the dyno that every single Hellcat Hemi is subject to, this 707hp engine is one of the most time consuming and labor intensive engines in the Chrysler arsenal. Because of that, the Hemi engine plant cannot make as many Hellcat engines as they can, say, the 5.7L Hemi that is used across so many vehicles. In other words, Dodge doesn’t have a production limit in mind for the Hellcat powered Charger and Challenger, but the availability of the package specific features – most notably the Hellcat Hemi itself – could effectively prevent the Dodge brand from selling 20,000 Hellcat models a year.

Realistically, there isn’t a good chance of Dodge selling 20,000 examples of a 707hp muscle car whether it has four doors or two, but the fact that there is no planned production limit for either of the SRT Hellcat models should help keep the price near MSRP…especially a few months after they have become available to the public.

Nick wrote on August 26, 2014 - 10:51am Permalink
This would be great news for the folks that want / need one. Not so good news for the future value of the HellCat. It's a bummer the car will never have a "Rare" car status...
Brandt wrote on August 27, 2014 - 12:08am Permalink
I for one am very proud of Dodge not setting a limit and thereby making a few people happy and ruining the chance for everyone that wants this awesome beauty in their garage. I swore I would never purchase a vehicle under the squeeze routine since I ordered the 1973 455 SD Trans Am and got scammed by Pontiac. Been all foreign since then. I'm back! Now where will I park it? Thank you.
Franklin E Leach wrote on August 27, 2014 - 5:31pm Permalink
Now if we could only place an order and get this beast on the road!
Martin B. Hammond wrote on September 1, 2014 - 9:43pm Permalink
Finally.A car built by dodge we can be proud of. and it is being built North America.Lee. Iacocca must have a big smile on his face . way to go dodge
Martin .B Hammond wrote on September 1, 2014 - 9:50pm Permalink
its about A Dodge gave us a car we can be proud of .and it is going to be built is North America.Lee Iacocca must Have a big smile on his face
Dustin wrote on January 25, 2015 - 9:58pm Permalink
I live in Hawaii and want this car so bad Lola but the dealerships here are marking it up $25,00 and I refuse to pay 90+ thousand for this car. Can somebody tell how can I get my hands on the challenger srt hellcat without the high mark up?
Ryan wrote on July 1, 2015 - 7:12pm Permalink
Hi Dustin. Are you still looking for a Hellcat?
GeeWillikers wrote on September 3, 2015 - 8:16pm Permalink
The Charger is near impossible to get. We had an order in opening day. Then the allocation clusterf#ck started. Orders for 2016 were supposed to include 2015 unfilled rollovers. Now thats out. As far as not paying over sticker price, thats a complete joke. Every dealer is adding at least $15,000
jo savo wrote on September 28, 2015 - 6:56pm Permalink
Boy, this article is too wrong to keep up here. LOL They were and are limited. I have one of the 1300 limited Chargers.