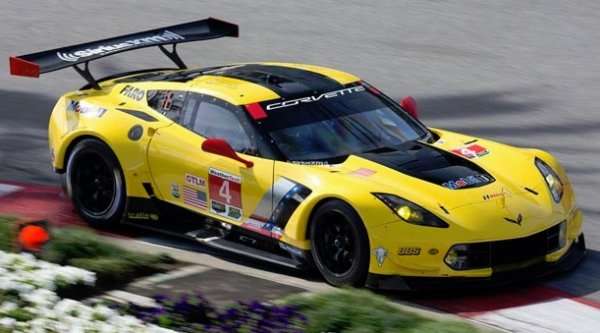 After the #4 Chevrolet Corvette C7.R appeared to be the car to beat in the GT LeMans class this past weekend in the Grand Prix at Long Beach, a dirty move by one of the Porsche North America team cars forced Corvette Racing to settle for 2nd with the car piloted by Tommy Milner and Oliver Gavin.
Advertisement

Corvette Racing has dominated the GT LeMans class in the 2016 Weather Tech Sports Car Championship, finishing 1-2 at the Rolex 24 at Daytona while the #4 Corvette of Milner and Gavin took the class win at the 12 Hours of Sebring race. In winning the first two races of the season, the #4 Corvette was the odds-on favorite as the teams headed to California for the Bubba Burger Sports Car Grand Prix at Long Beach and you had to expect to see the #3 Corvette around the front of the field as well.

Qualifying and the Early Stages
The Corvette Racing teams came into Long Beach flying, with the #4 car turning the quickest lap among the GTLM field in practice one while the #3 Corvette was 3rd quickest in the field. The Corvettes slipped back in the field a bit during the second practice and heading into the 1 hour and 40 minute street course race, the Corvettes qualified 4th and 5th in class, 12th and 13th overall.

Even though the #4 Corvette has to make an unscheduled pit stop to replace a blown tire just a half hour into the race, the two Corvettes had moved to the front of the field just before the halfway mark, with Tommy Milner taking the lead with 53 minutes left in the 100 minute race. From there, Milner would pull away from his teammate in the #3 Corvette to the tune of 11 seconds, but a full course caution bunched the field up late in the race.

Things Go South Late
After the late restrart, the two Corvette Racing teams held the top two spots in the GTLM class, but when Antonio Garcia crashed with 9 minutes left, the #3 team was forced to settle for a 9th place class finish (22nd overall).

Even without his teammate in tow, Milner and his #4 Corvette C7.R continued to lead the GTLM class, and it appeared that he would be racing to his third straight win. However, with 2 minutes and 10 seconds left in the race, Milner approached the turn #11 hairpin and when he slowed, the #912 Porsche 911 driven by Fred Makowiecki took a very awkward line and plowed into him from behind. This spun the Corvette around and allowed the #911 Porsche – the teammate of the car which hit the Corvette – to pass and claim the win.

The video below shows the full broadcast of the race and if you fast forward to the 1 hour and 20 minute mark, you can watch the #912 Porsche spin the #4 Corvette.

Milner would still finish second in the class, but considering the cheap means in which the Porsche team won, it is a disappointing second. The Porsche driver admitted that he was at fault for the accident that took the Corvette out of the lead, but no other action was taken against the team that cheated to win.

The good news is that with a 2nd place finish, the #4 Corvette team still holds the top spot in the team championship race while Gavin and Milner continue to lead the driver’s championship race.

The next race is later this month, when the teams hit the hills of Laguna Seca for the Continental Tire Monterey Grand Prix Powered by Mazda.

FactChecker90803 wrote on April 18, 2016 - 2:39pm Permalink
I would hate to be the #912, at Laguna later this month.
Howard D Young wrote on April 18, 2016 - 6:43pm Permalink
corvette racing does not work that way. when you are the best you dont have to cheat or get revenge. i just wonder why imsa isnt saying anything. it is easy to see the 911's are doing this on purpose in the last 2 races.
nasportscar wrote on April 18, 2016 - 4:26pm Permalink
Dirty team work? Come on, that's a brutal headline for this story. The #912 made a stupid move (which he took blame for) and the #911 benefited from it like every other car in that situation would have. The #911 had nothing to do the spin and the cars did not secretly work together to to ruin Corvette's race so the 3rd place car could swoop in for the win on the last turn.
Howard Young wrote on April 18, 2016 - 6:39pm Permalink
the 911 driver said he was at fault. did you even read the whole article.
Nasportscar wrote on April 18, 2016 - 7:59pm Permalink
Yes, I read the article with the horrible title. The #912 took blame like I mentioned in my previous comment. There was no teamwork on Porsches part to take out the corvette like is suggested in the article. Just another corvette fan boy conspiracy theorist
Von Mises wrote on April 19, 2016 - 8:21pm Permalink
Makowiecki took responsibility, he didn't apologies. There's an important distinction here. Was it team orders, Could have been. Only the people on the radio know with 100% certainty. Was it a mistake? Highly doubtful. A rookie wouldn't have attempted that line. At that level of racing, a move that stupid should cost him his ride. Listen to the comments after ward. It was described by one of the announcers as "disgusting." I think it's pretty clear what happened.
howard d. young wrote on April 18, 2016 - 6:38pm Permalink
dont forget the 12 hrs at sebring either. that is where a porch911 took out the 3 corvette. if u watch the race u can see the 911 made a dash at the 3 that looked like it was on purpose. just because these 911's cant keep up with corvette racing it seems they have taken to cheating instead. WHERE IS IMSA ON ALL OF THIS? at sebring even though the 3 was knocked out it still finished in 9th in the lead lap and the 4 who won was at one time 2 laps down. corvette racing has the best cars, drivers, pit crews and manager, THAT IS HOW YOU WIN RACES, not CHEATING. the porsch team should be shut out for the rest of the season.
Fred Kokaska wrote on April 18, 2016 - 10:50pm Permalink
Fred Makowiecki missed his calling... in NASCAR.
Monterrey wrote on April 19, 2016 - 8:09pm Permalink
Lets bring some rotten eggs next month in laguna seca. If imsa'll not going to do anything, we will.
Bill mee wrote on April 21, 2016 - 12:37am Permalink
After driving around being held up for lap on lap. Then in a tight corner he drove into a spot where the vette had the avility not to turn in and recognize a car alongside. Simply driving a wider line. You can see the rubber there where this happens alot. Its also the slowest corner. Hairpin. Lets just simoly say was there room for the vette to go wide. Answer is yep. Use those mirrors for more than blocking.

For Some Former Daimler Managers Daimler Is Authority, While Tesla Is Like a Startup
How Daimler Unintentionally Subsidizes Tesla Giga Berlin
END_OF_DOCUMENT_TOKEN_TO_BE_REPLACED