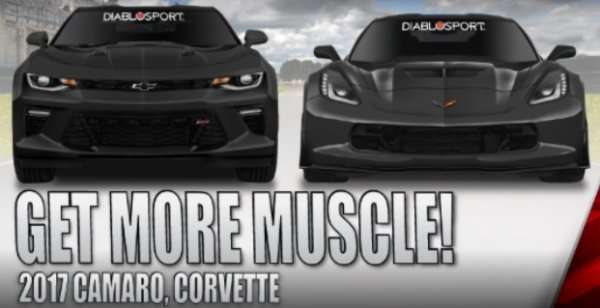 If you have a 2017 Chevrolet Camaro SS, Corvette Stingray, Corvette Grand Sport or Corvette Z06 and you would like to add a little more power with the push of a button, you are in luck, as the tuning experts at Diablosport have just rolled out their pre-loaded performance tuning packages for each of those high performance Chevys.
Advertisement

One of the simplest ways to add a noticeable amount of power to all new vehicles is a good engine tune and for those 2017 Camaro and Corvette owners who want a touch more power without making any actual modifications, the folks at Diablosport have just rolled out their pre-loaded performance packages for the newest Camaro SS and the entire Corvette lineup.

Doing a quick web search, it looks like the Diablosport inTune costs around $360 while the Trinity costs around $500, but considering the power increase coupled with the other advantages of these tuning devices, a hand tuner is really one of the best performance gadgets on the market today.

Ivan Estrella wrote on April 23, 2018 - 10:04am Permalink
i have the diablo Trinity programmer and I want to install it in my 2017 ss 1le camaro but when i try to install it, it say my programmer needs an update and i have updated already still saying the same thing. I was wondering if yall can send me the update i need for the 2017 ss 1le .