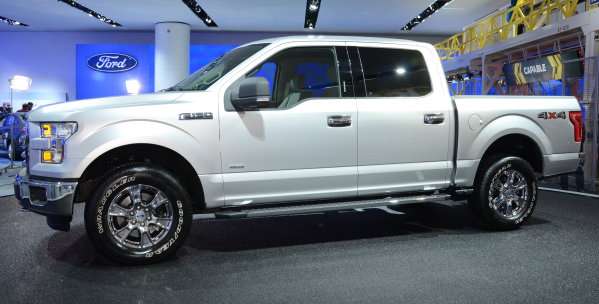 Ford Motor Company issued a recall for the 2015 Ford F150 pickup over a concern that a component of the steering column could fail – leading to a sudden loss of control if this problem occurs at speed.
Advertisement

The 2015 Ford F150 pickup is chock full of modern innovations that helps to make it one of the most efficient and most capable half ton truck lineups ever. However, Ford Motor Company has been forced to issue a recall for a component that is found in pretty much every truck in America, as it seems as though a problematic rivet on the steering column could lead to a pretty serious problem in the new lightweight F150.

The affected vehicles include new F150 pickups that were built at the Kansas City plant from March 19th 2015 to March 21st 2015 and some other trucks that were built at the Dearborn plant from March 21st 2015 to March 30th 2015. In total, 12,328 new F150s are included in this recall and fortunately for the Motor Company, 6,722 of these trucks are still in dealer stock while the other 5,606 have been purchased. The fact that so many are in dealership inventory will allow the company to address more than 50% of these problems without having worry about contacting a private owner, but there are still 5,600+ F150 owners who will need to get their trucks checked out.

There have been no accidents or injuries stemming from this 2015 Ford F150 recall, but Ford has received one report of a driver losing driving control of their truck and the cause is believed to be this problematic upper intermediate shaft.

There has been no official time table for this recall, but once Ford begins contacting owners of the 5,606 new F150 pickups included in the recall, these folks will be asked to bring their truck back to their local Ford dealership. Once there, a technician will inspect the upper intermediate shaft and, if needed, replace the questionable components. This work will be performed free of charge to the owner and while the inspection portion of the fix should be fairly quick, replacing the shaft could be time consuming enough that you’ll want to leave your truck at the dealership and wait for a call.

LG's New EV Battery Plant Is a Welcome News for Tesla
Tesla Giga Berlin's New Hurdle: It's Not Only the Gov't, but Now Tesla Itself
END_OF_DOCUMENT_TOKEN_TO_BE_REPLACED