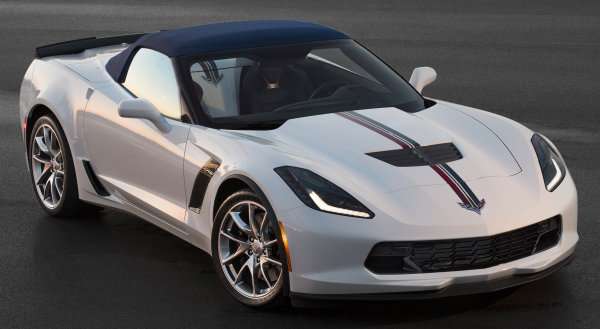 A Detailed Look at the 2016 Corvette Changes

Last Friday we brought you a look at the 2016 Chevrolet Corvette Z06 C7.R Edition, but that isn’t the only news for the 2016 model year Corvette – and today we take a look at the other changes for next year’s new Corvette Stingray and Z06.
Advertisement

Since the C7 Corvette arrived for the 2014 model year, it has been a dominating force in the sports car sales world, but with the 2016 model year rapidly approaching, General Motors didn’t want to sit back and enjoy the success of the new Corvette. Instead, the automaker wanted to take the input of owners and enthusiasts to make slight adjustments to the 2016 Corvette that would make it even better. As a result, the changes for the 2016 Corvette are minor, but they help to keep the C7 fresh and they give buyers a reason to consider another new Chevy supercar.

Three New Design Packages
First up (aside from the Z06 C7.R Edition), the 2016 Corvette benefits from a trio of new design packages that impact the look of the interior and exterior - Twilight Blue, Spice Red and Jet Black Suede.

Twilight Blue (shown above) is available in Shark Gray, Blade Silver, Arctic White or Night Race Blue and it comes with a blue convertible top (when applicable) and Shark Gray accents vents. This package also adds the polished “motorsport” wheel design, either black or gray brake calipers, a rear wing on Stingray models without the Z51 package, an optional tri-color body stripe, a Twilight Blue interior spread and Magnetic Ride Control on Stingray models without the Z51 package.

The Spice Red package is similar in its nature to the Twilight Blue package, but with different color options and slightly different features. Spice Red adds the same Magnetic Ride Control, the Motorsport wheel and the rear wing as the Twilight Blue package, but the available exterior colors include Long Beach Red Metallic Tintcoat, Shark Gray, Blade Silver and Arctic White while the interior and the convertible top are finished in Spice Red.

Other Minor Changes for 2016
In addition to the three new design packages and the limited edition C7.R Z06, the 2016 Corvette benefits from a collection of very slight changes. First, Velocity Yellow and Crystal Red Tintcoat will be replaced by Corvette Racing Yellow Tintcoat and Long Beach Red Metallic Tintcoat. There is a new standard Corvette Stingray wheel design available in black, machined and chrome and those folks who order the Carbon Fiber hood option will get to enjoy an exposed weave section. The last change on the outside is the removal of the chrome grille bar when the Carbon Flash badge option is chosen.

On the inside, the 2016 Corvette gets a new flat bottomed steering wheel, new two tone GT seats in either red or gray and when the 3LT Jet Black interior is chosen, buyers can pick from red or yellow stitching.

No pricing has been announced for the 2016 Chevrolet Corvette Stingray and Z06, but with the 2016 models nearing production, we should learn all of the vital details on the 2016 model year within the next few months.

old school the ... wrote on April 29, 2015 - 2:14pm Permalink
WHAT DIRECTION IS GM GOING,..? The 2014-2015 Vettes are beautiful,... now they are changing them again,....? I WOULD BE FIRING PEOPLE ASAP,...Go back and start over,... sometimes companies try so hard they wind up with a an abortion in the end,... >>>Take a lesson from DODGE & FORD The Challengers and Chargers and Shelby Mustangs are beautiful less is more,. hey GM KEEP IT Simple,..! Pack solid software system in the car, get rid of the current software and >ONSTAR crap< DODGE'S SOFTWARE IS BULLET PROOF AND they GIVE YOU AN AWESOME BUILT IN GARMIN NAV,...! HEY GM,..! get back to putting in bullet proof suspensions, engines and tranny's,... HEY GM,..! I SOLD MY 2014 SIERRA JUST BECAUSE YOUR SOFTWARE AND ONSTAR SUCK WITH A CAPITAL >S< Your doors were cheezy,... the cab was NOT AS QUIET AS MY BRAND NEW RAM 2500 HD,.... and a ton of other things,..... I WAS GOING TO BUY<<< A BRAND NEW 2014 VETTE but MY ONLY COMPLANT WAS THE COCKPIT WAS RIDICULOUSLY SMALL,...! WHAT THE FRIG ARE YOU PEOPLE THINKING,...? MY 1977 and my 1978 silver anniversary vette's C-3 ( THE NICEST LOOKING AS FAR AS I AM CONCERNED ) WERE AWESOME,..! ROOMY AND COMFORTABLE,... <<< WHAT DIRECTION ARE YOU GUYS GOING,..? 150 LB 5'4" DRIVERS,..? WHAT THE FRIG,..? MY LEFT SHOULDER AND HEAD WAS SMASHED UP AGAINST THE CAB IN THE 2014-2015 VETTE'S << MY ONLY COMPLAINT, BESIDES ONSTAR AND SOFTWARE,.. GM'S VID SCREEN IS NOT USER FRIENDLY<<< TRY DODGE AND SEE THE DIFFERENCE<<<BTY>>> I OWNED A BRAND NEW 2014 SATIN VAPOR EDITION CHARGER SUPERBEE,... 475 HP BEAST THAT ATE A 2013 VETTE,.. WIFE SAID IT HAD TO GO,.. was afraid of me loosing my license,.. That car SCREAMED TO LIVE AT 150 MPH and over and just kept building,... DODGE IS BUILDING SICK CARS,... I am 53 YEARS OLD so I have lived both sides of the spectrum, GM WAS MY CAR FOR OVER 25 YEARS,.... They have lost my respect,... Please try and start building a good vehicle again, and get rid of the young tard engineers and go hire a couple of old guys with some time under there belt ( REMEMBER, THEORY NEVER CHANGES,..! ) GET BACK TO BASICS,...! Where are the Smokey Yunicks and John Deloreans of our day,...? These guys were innovators,... These YOUNG people that GM has working for them it seems cannot appreciate what we did to make power in the old days,... Dwell adjustments, cam/lifter configurations, magna fluxing, modifying head configurations, 5 angle valve jobs, resetting the timing, flow bench work.
jim dee wrote on May 17, 2015 - 6:03pm Permalink
Hi Folks, As far as I an concerned the C-7 Corvette has gone about as far as one would want to go with a rear wheel drive Sport Car. The next logical step is ,obviously,a mid engine car.That would put the Vette completely out of the price range of most Vette buyers.Solution?As the old saying goes" leave well enough alone"!Small minor improvements-fine-small horsepower increases-fine-slightly better ride charactorist improvements-fine-fancier paint colors and enterior improvementrs-fine.Other than that leave the damn thing alone!Just think back to how long the C-3 lasted from 1968 to 1982.HELLO!Wake up. Jim Dee
Joe Peterson wrote on December 15, 2015 - 3:53pm Permalink
Hi The C7 Stingray is the best performer yet (Only those who have no clue would say otherwise) ;Keep up the good work GM, If the older crows do not get it, the younger generation will. PS There are a number of things Corvette can do to improve performance before incorporating a mid engine design; like 4 wheel drive (more Z06 power to the road) ...... ..

LG's New EV Battery Plant Is a Welcome News for Tesla
Tesla Giga Berlin's New Hurdle: It's Not Only the Gov't, but Now Tesla Itself
END_OF_DOCUMENT_TOKEN_TO_BE_REPLACED