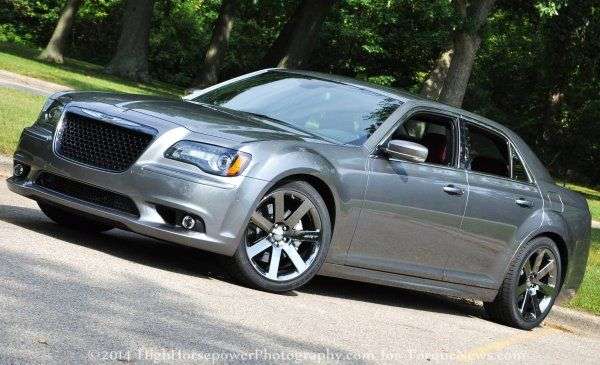 The news surfaced last week that the Chrysler Group’s SRT division was being consolidated into the Dodge brand and with that came the news that the high performance SRT variant of the Chrysler 300C would be discontinued – a move that will most certainly sadden Mopar fans, but it won’t have much negative impact on the company going forward.
Advertisement

The Chrysler 300C SRT8 is a remarkable high performance luxury sedan that has allowed lovers of American muscle to drive a swanky, powerful full size luxury 4-door that would compete with the best in the world at a fraction of the price. While the 300C SRT8 (named only the 300 SRT in the most recent iteration) has always been mechanically identical to the Dodge Charger SRT8 in addition to also sharing many interior attributes, the two full size sedans appealed to two different segments. The Charger has always had a more muscular look that is very obviously keyed to a high performance car, the Chrysler 300 SRT took a more subtle approach. The muscular features are there – but the styling is slightly less aggressive and slightly more luxury themed – so for those who wanted a more understated performance car with a luxury feel the SRT 300 was a beautiful option.

This decision most certainly upset some Mopar faithful who own and love the Chrysler 300 SRT and honestly, having had the pleasure of driving a few of these high performance sedans I can say that this is a hard car NOT to love. The interior is super comfortable and packed full of high tech goodies while the outside is sleek and sexy – with an infusion of technology giving this brawny sedan a stylish, European look. With 470hp and 470lb-ft of torque, it is one of the most powerful sedans sold in America and it is the least expensive true high performance sedan in the US market. Unfortunately for those fans of the SRT 300, the attributes that make the SRT 300 so great are all available in the Dodge Charger SRT so it makes good business sense for the Chrysler Group to eliminate the in-fighting between the two 470hp sedans.

I have seen a variety of studies that look at automakers that offer closely related models in the same dealership showroom – like the Dodge Charger and the Chrysler 300 or the Dodge Grand Caravan of the Chrysler Town & Country. The studies have found that when some consumers are presented with two choices that are SO similar, some of them are unable to choose and they leave without a new car. In many of those cases, the inability to pick whether they want one car or the other (when there are almost no real differences between the two) will lead those indecisive buyers to go to another automaker that offers just one of the vehicles in that class. For example, someone who cannot decide between the Dodge Grand Caravan or the Chrysler Town & Country are likely to go out and buy a Honda Odyssey. In the case of the Charger and 300, there are far fewer options than with the minivans, but the negative impact of close competition within one company impacts every segment on some level.

While the decision to kill off the SRT variant of the Chrysler 300 could send those folks who really want a large luxury sedan to a competitor, others will have an easier time picking the new Dodge Charger SRT – which will offer all of the advantages of the SRT300, but in slightly different packaging. The Chrysler 300C SRT8 is unquestionably a remarkable high performance luxury sedan, but those who want one had better buy one before they’ve gone the way of SRT Ram 1500.

demond palmer wrote on May 15, 2014 - 9:19am Permalink
that a bad news couldn't get those newest cars ever!
Mike wrote on May 11, 2015 - 11:38pm Permalink
The Charger would of been an option, but since Dodge ruined it with that HORRIBLE looking trashy front and lame rear, borrowed from the Dart,(LAZY DESIGNERS JUST SLAPPED ON ANOTHER CARS PARTS) an interior that is ok but not as nice as the 11-14 models, and stupid reflectors in the wheel well, the car they still call a Charger is not even given a thought. A used one is the only option or go elsewhere.