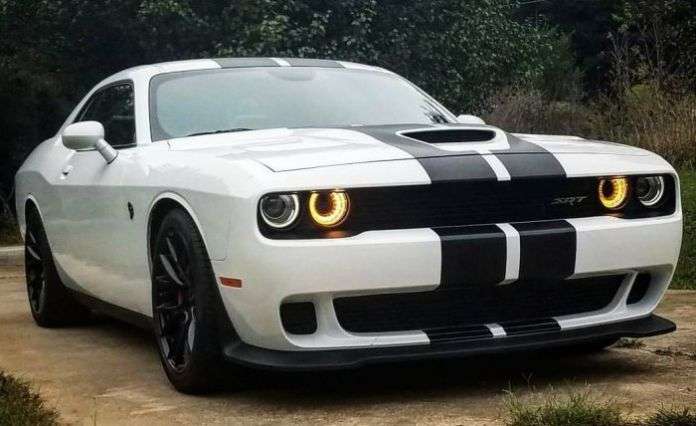 The December Hellcat of the Month as picked by the members of the SRT Hellcat and Demon Facebook Group is the 2016 Dodge Challenger SRT Hellcat shown above, owned by David Baker.
Advertisement

In the December Hellcat of the Month nominations, we focused on the Dodge Challenger SRT Hellcat and of the five supercharged muscle cars put up by the community – David Baker’s car took the title for the last month of 2017 by a huge margin. David’s white Hellcat Challenger received 63% of the votes while the second and third place cars each got 13% of the votes.

After the members picked David’s Challenger as their favorite for the month, we reached out to him for more information on his supercharged Mopar muscle car in his own words.

Why the Hellcat Challenger?
In my opinion, the Hellcat Challenger and now the Demon, are the only true vintage type muscle cars available for purchase. The Challenger screams America in a time where everything else is going European from a styling standpoint. Simply put, it's the only game in town. On top of that, Dodge did one Hell of a job with the platform.

I really had little knowledge of the Hellcat. All I had ever owned in the performance world was Corvettes. My knowledge of these cars came at my local eighth mile track. The guy staged his Redline Red Hellcat and put down a 7.04 @ 103 mph. That got my attention. I approached the owner to get some info on the car. Come to find out it was completely stock other than tires! I joined the SRT Hellcat and Demon group on Facebook and soon after bought a Hellcat.

What Modifications Have You Made?
In my opinion, this is the most amazing aspect about these cars. How little you have to do to gain so much. At this point, all I've done is a lower ATI overdrive pulley and a 3.10 Metco upper along with Injector Dynamics 1050x injectors and a Bwoody air intake. With only 3psi of added boost the car produced 785 whp on pump gas. That is an absolutely unreal amount of horsepower with such a mild selection of upgrades. No other American car can produce that number with so little effort, especially on pump 93. I have Racestars Dark Star wheels in front and back for the track. Having said that, it's only the start.

Future Plans for the Car?
Right now the car is scheduled for upgrades to the drivetrain including Performance Development's rear end brace, DSS's dampened aluminum driveshaft, and a 3.09 rear differential. After that, I'll be implementing a track only setup. I'll be dropping to a 2.75 upper and an MS109 fuel tune and some trans tuning. An undetermined amount of nitrous is coming after that. Probably a 50-75 shot. The end goal is a 9.50's in a daily driver with amazing comfort and a killer sound system that I can bring all three of my nephews to the drag strip in. An amazing prospect.

I would like to thank those who have helped me along this path. First off, I'd like to thank my build man, Jon Sipple and my tuner, John Green of Mass Acceleration Motorsports in Denver North Carolina. These two are an amazing duo. I'd like to thank Josh Schwartz and his staff at HHP for lots of technical support when deciding the path I would take and competitive pricing on parts. I'd also like to thank a few of my Hellcat peers for lots of technical support and answered questions at all hours of the day, including Sumit Goyal, Dan Smith, Steven Ripa and Robert Lamb, as well as my “Track Crew” - Carson, Hudson, and Rylan.

A Big Congrats to David!
So, from everyone at TorqueNews and the Hellcat & Demon Group Facebook page, congratulations to David Baker and his 2016 Dodge Challenger SRT Hellcat for being the Hellcat of the Month for December 2017.

If you own a Hellcat Challenger or Charger, or you are waiting on a new Dodge Demon or Jeep Trackhawwk, and you want to get involved, click here to join the Hellcat Group Facebook page!