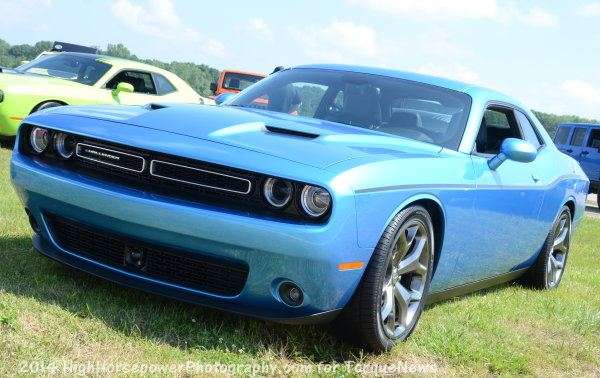 While the 2015 Dodge Challenger is still a little bigger and a little heavier than the competition, the 2015 models improved in every way except for one – the fact that there is still no manual transmission option with the base model V6 and that is one feature that could further help bolster Challenger sales.
Advertisement

Let there be no mistake – I love the 2015 Dodge Challenger. I love the 1971-esque exterior changes, I love the vastly improved interior, I love the new Scat Pack model with 485 horsepower and, above all else, I love the 707 horsepower Hellcat Hemi. What I don’t love is that there is still no manual transmission option with the base model V6, which gives the Chevrolet Camaro and the Ford Mustang a significant advantage in the modern muscle car race.

Also, the new 8-speed automatic transmission in the 2015 Dodge Challenger SXT with the 3.6L Pentastar V6 makes the entry level Mopar muscle car one of the most efficient options in the segment…even though it is also the biggest.

When you consider the facts that the manual transmission has a low take rate and that the 8-speed automatic does a great job of combining efficiency and performance, it isn’t hard to understand why Chrysler wouldn’t want to spend the money to develop a manual transmission. This not only gives the Mustang and the Camaro an advantage in the eyes of many prospective buyers, but it also gives those two V6-powered muscle cars a performance advantage. Even with the automatic transmission technology advancements that make the Hellcat Hemi and the 8-speed automatic a match made in heaven, a smaller, less powerful engine like the 3.6L Pentastar would benefit a great deal in terms of both wheel horsepower and basic fun to drive factor with a manual transmission.

Unfortunately, it appears that the bean counters who point out the low rate of return on developing a manual transmission for the 2015 Dodge Challenger SXT will win out in this case. Fortunately, those same stick in the mud numbers people lost the battle with the likes of the Hellcat Challenger so not having a manual transmission in the base model proves to be a solid tradeoff for a 707hp halo car.

However, if the Chrysler Group was to offer a manual transmission for the “base model” Dodge Challenger with the V6 engine, there is no question that some folks who want more driving excitement out of their affordable muscle car would more closely consider the Challenger against the Mustang and Camaro.

Auto Motive wrote on October 2, 2014 - 4:50pm Permalink
Please note that the only muscle car is a automatic V8 as manuals are less efficient, fewer consumers in the US want them (85-15) and it cost too much for the auto mfgs to have them on the same assembly line. The death of the 6 cyl is evident as a muscle car since most people buy them since they are daily drivers and I haven't seen more than 2 at a local car cruise. If you get a challenger get the V8 and if you don't have enough cash save like us seniors did to buy our first new corvette.
Skip wrote on October 4, 2014 - 8:11am Permalink
I drive the 3.6 pentastar in a 2013 Chrysler 300 with the 8-speed transmission and I love it. BUT... I have to say, drivers would not get much savings with a heavy car like the 300 or Challenger with the V6 and a manual transmission. I am constantly driving my 300 in sport mode and mashing the gas in a city environment, so I get about 14.1 MPG. While I can rake in 23 on a decent high-way drive, I can't imagine getting better than 12/19 in a manual transmission. SO, my point is that the manual transmission would probably come with the gas guzzler tax just like with the manual V8s. In that case, saving 400 bucks or so is really not worth getting a manual transmission for most folks. Low demand and the production factors that the Vette showoff mentioned might be a better set of reasons we won't see a manual V6 from Fiat Chrysler Automobiles.
josh wrote on May 17, 2015 - 1:24pm Permalink
Your way off. Whereas the 8 speed is a marvel the worst a manual would compare is 1mpg less and equal performance numbers. Not to mention the minimum 1000 bucks you would save on the price. That being said why argue giving people the option? Most I know would drive a stick even if it was a worse choice simply because it's fun and offers control you simply cannot gen in any auto
john wrote on December 9, 2014 - 6:58am Permalink
This article is inaccurate the 8 speed cars are faster than the manuals and while I've seen many people say muscle cars need manuals the fact the challenger is as big as a 7 series and rides and feels more like a gt a manual Just doesn't seem to fit it'd personality plus the added maintenance and fuel cost plus it's slower is the nail in the coffin for me on a manual
Lisa wrote on March 9, 2015 - 3:02pm Permalink
I'm currently leasing a 2013 Challenge,r the only thing I absolutely hate about the car is the automatic transmission (what fun is this) and what's up with the stupid paddle shifters they get in may way? My lease is up in 2016 please, please put a 5 speed manual transmission with a CLUTCH and I would gladly purchase another Challenger, otherwise I will have to look elsewhere
Pat Harkins wrote on July 9, 2015 - 10:47pm Permalink
is a 6 cylinder manual in orange a wish that can't come true?
Mikey wrote on February 19, 2016 - 11:50pm Permalink
Dodge u should charge the same for manual transmission people will buy people are worried about the eight speed transmission slipping down the road causing thousands of dollars when the manual will just need the clutch to be replaced .i would pay 2k more for v6 Challenger.in 5spd. They should be a special order five speed.but if u want 6spd u got go for v-8. does anyone know if there's a conversion kit ? There's plenty of people who rather have manual over the extra power .iam one of the the car is boring in auto
Lucas wrote on August 19, 2016 - 4:14pm Permalink
I totally agree Nice to have a challenger v6 with a manual transmission I got me a 2013 mustang v6 6 speed manual
John Buster wrote on January 12, 2017 - 4:52pm Permalink
I look every day for a Challenger. However, I want a standard transmission. No exceptions. Will not buy a Challenger until the standard is available. Jump in the Lake Chrysler.