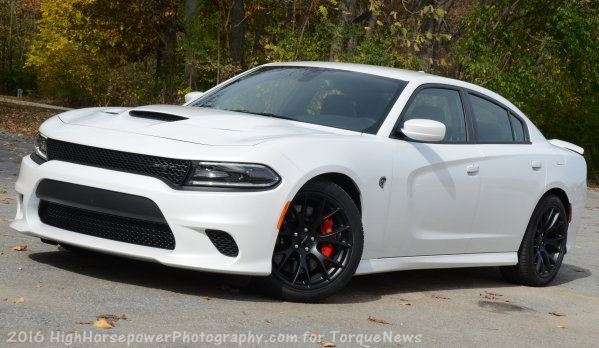 According to a few dealership employees around the country, the Dodge Challenger SRT Hellcat and the Dodge Charger SRT Hellcat are within their final year of production – but I don’t believe for one second that this is anything more than unscrupulous car salespeople trying to bolster sales.
Advertisement

In the past two weeks, I have been contacted by a handful of people from around the country who have been told by their local Dodge dealership that the lifespan of the Dodge Challenger SRT Hellcat and the Dodge Charger SRT Hellcat is quickly coming to an end. In some cases, they’re being told that this is the final model year and in other cases, they are being told that 2017 will be the final model year, but in every case, they are being encouraged to come in right away if they want to buy a Hellcat car.

While I understand the need for dealers to move units – especially high-priced models like the Hellcat Challenger and Charger, I don’t believe that this is any more than a rumor created to rush prospective buyers into pulling the trigger on a new Hellcat car sooner than later.

In any case, here is a look at why I don’t expect the Hellcat Challenger or Charger to vanish from the dealership landscape anytime soon.

The Future of the Challenger and Charger
It is widely expected that the Dodge Challenger and the Dodge Charger will be completely refreshed for the 2018 or 2019 model year, with both cars transitioning from the current LX platform to a new platform shared with the Alfa Romeo Giulia. When that happens, we are likely to see a change in the engine lineup and, unfortunately, that new generation could exclude the Hellcat Hemi. Based on the popularity of the Hellcat packages – both in sales and in overall industry branding – I believe that Dodge will continue offering the 707hp supercharged Hemi as long as they possibly can, but there is that outside chance that they will head into the next generation without the Hellcat engine.

The next generation Charger and Challenger are expected to continue on as larger vehicles, but the move to the new Alfa-designed chassis platform should make them both a touch smaller and (hopefully) quite a bit lighter. Both cars will continue to be performance vehicles and with the Viper leaving the lineup, you would think that the company would want to use their most powerful engine of all time in their next generation muscle cars – but again, I suppose that there is some small chance that the Chrysler Group will lighten up the power output of the next gen Challenger and Charger.

That being said, the next generation Dodge Challenger and Charger are likely at least a year away, with the 2017 model year standing between the current and next gen models. If the new Challenger and Charger are set to arrive for the 2018 model year, they will likely hit dealerships in the summer or early fall of 2017 at the latest. Even if they arrive in the spring of 2017 as early 2018 model year vehicles, the 2017 models would still have almost a year of sales, so the Hellcat cars will almost certainly return for the 2017 model year.

Furthermore, if the next generation Challenger and Charger are set to arrive for the 2019 model year, I fully expect to see the Hellcat Hemi featured for the 2017 and 2018 models, but even if there is no Hellcat Hemi package for a 2018 next gen Dodge muscle car – you still have more than a year to peruse the new models at your local dealership.

Finally, the Dodge Viper is being killed off due to a variety of unofficial reasons, but in speaking about the end of the Viper, Chrysler Group folks are quick to point out that the Hellcat cars provide all of the branding of the Viper, while also posting far better sales and better performance numbers in some situations. Basically, Chrysler is killing off the Viper because they have two other amazing performance cars, and with Dodge being marketed as a full-on performance brand, is the company really going to kill off the three most powerful models?

I don’t think so, because it just doesn't make sense to build a brand's reputation for high performance only to kill off the best performing vehicles.

April wrote on May 20, 2016 - 8:36am Permalink
Make the dealership that said the Hellcat is ending this or next year, sign a contract when you buy, that if they continue the Hellcat, they owe the customer 10k. lol
synoptic 12 wrote on May 20, 2016 - 10:10am Permalink
FCA should look at a new approach as to introduce a Dodge Barracuda, more streamlined than the Challenger. The platform of the Challenger, along with the Charger and many other vehicles is just too large. The symmetry associated with many vehicles today is that they look 'elephant' like, whereas the dimensions are not in unison with the vehicle profile. > i.e. "height". This may revolve around the 'numerous' airbags, where the engineer or artist must configure a sketch, while taking in all aspects according to regulations. This must be a great hindrance as to design a vehicle, and to be limited to few choices of architecture; 'so to say'. Whether it is the platform or restrictions, muscle cars have lost much contrast compared to the classics of yesteryear. If the SRT hellcat were a thousand dollars, we would not purchase. In fact, I would not take one for free. The interior is offset with horrible design including the dash, console, shift position and gauges. Incorporated into this menagerie are the system electronics which are more viable for an aircraft. We cannot determine the consensus of instituting all these measures; only to say that they are mostly all useless, an intrigue for those which cannot see clearly. Should the consumer demand be in line with hysteria, by all means continue, "Just not for us". Plastics embody most of the interior as the contracts are awarded to the manufacturer or supplier which can bring the best deal to the table. Maybe at one time, auto manufacturers were seeking quality to identify the prize, but today only the quantity which may be moved is an indication of the 'progressive' momentum of the assembly line. A new strategy should be given thought, if possible; to restructure or re-design automobiles. We believe that FCA is most capable to introduce a new spectrum, but will they?
Don Corda wrote on May 29, 2016 - 4:25pm Permalink
Work at major Chrysler dealership in TX. and spoke to Detroit VP @ get together outing. Says Hellcat is not going anywhere and with the new addition of the 707 HP Grand Cherokee beast in 17, expect bad ass power for @ least another 3yrs.

Toyota's First EV Will Have a Name of BZ: Toyota BZ
First Videos From Inside The Boring Company's Las Vegas Loop
END_OF_DOCUMENT_TOKEN_TO_BE_REPLACED